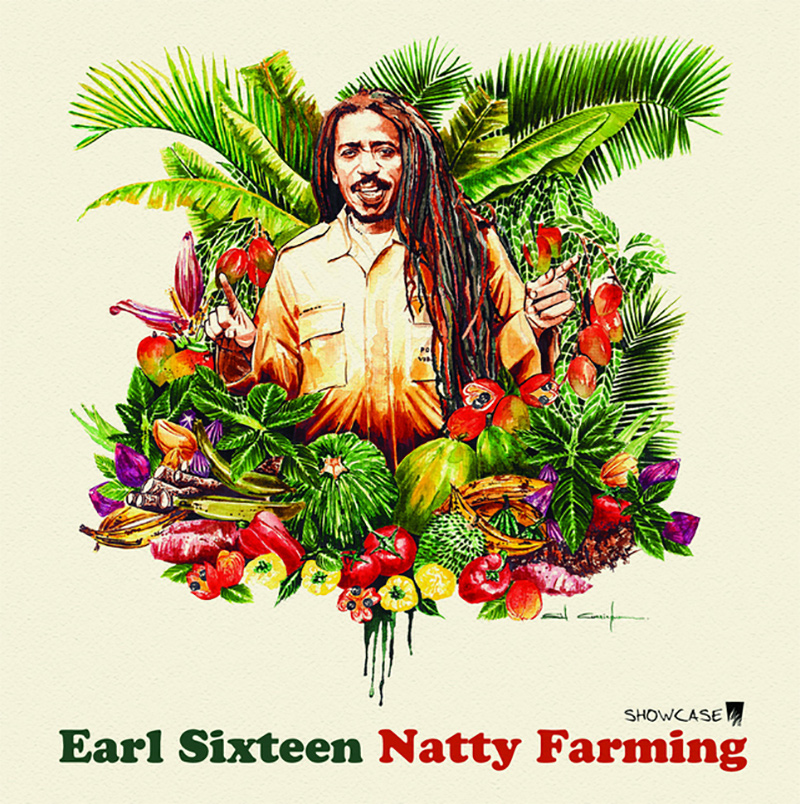 Artist out of Bristol, United Kingdom, used for the front cover of Earl Sixteen’s album “Natty Farming”, produced by Roberto Sánchez in 2013.

Earl Sixteen (born Earl John Daley) grew up in Waltham Park Road, Kingston and began his singing career by entering local talent shows. He became the lead vocalist for the group The Flaming Phonics, playing live around Jamaica. Needing to make some money, the group tried out for producer Duke Reid, but left before finishing their recording for him due to his habit of firing live gunshots in the studio. They then worked with Herman Chin Loy, with Daley cutting his first solo track, “Hey baby”. The group split up, with Earl Sixteen concentrating on his solo career.

He recorded “Malcolm X” for producer Joe Gibbs in 1975 and in 1977 joined Boris Gardiner’s group, The Boris Gardiner Happening, which brought him into contact with Lee “Scratch” Perry for whom he recorded 4 tracks at Perry’s Black Ark studio, including the original recording of “White Belly Rat”. In the early 1980s he recorded singles for a variety of producers including Linval Thompson, Augustus Pablo, Clement Dodd, Sugar Minott, Yabby You, and Derrick Harriott. Earl Sixteen however recorded his debut album with Mikey Dread. He teamed up with Roy Cousins for two albums, “Julie” and “Special Request”. Earlier material recorded for Studio One was released as 1985’s “Showcase” album.

In 1985, after spending time in the United States, he relocated to England, fathering a child. His child’s mother knew Mad Professor, for whom he recorded the album “Babylon Walls”. He also worked with other British producers such as Stafford Douglas. One of his tracks from this era was a cover version of “Holding Back The Years”, which had been a big hit for Simply Red. Returning to Jamaica, he worked briefly with King Jammy. In the 1990s he made guest appearances on tracks by Leftfield, and he has been one of the two vocalists for the UK electronica/reggae band Dreadzone since 1995. He signed to WEA for his major label debut album, 1997’s “Steppin’ Out”, which was nominated for a MOBO award.

Earl Sixteen has been working with producers in the UK and Europe, which led to the release of albums such as ‘Wondrous Works”, “Mash Up The Dance”, “Wake Up”, “The Fittest” and “Natty Farming”. He started his own label, Merge Productions, releasing previously unreleased vinyl from the 1970s and 1980s. He also released an album on Merge Productions, “Walls Of The City – Earl 16 Meets Nick Mannaseh” in March 2013.

In 1997 he started recording with some friends (Better Collie) using a four track recorder. They released many demos under that name. Then in year 1999 he got a 16 track recorder in London and started producing as “Loud and Lone” alongside Borja Juanco. They released two different showcase albums and a compilation cd (“Better Collie” and “Loud and Lone” (1998-2001). In 2002 he set up his own studio and then he released his first set as Lone Ark called “Countryside”.

The studio equipment and the productions always were focused on the late 1970s sounds (analog recording and mixing). There he has produced and recorded many Spanish bands and producers’ works (Jahsta, We and Dem, Basque Dub Foundation, Dubby Ambassah, Lone Lions, Dread Drive…) and also all his own productions released by A-Lone and other record labels. These include notable albums from Alpheus, Earl Zero, Noel Ellis,  Milton Henry, Earl Sixteen and Keith & Tex.  The aim of Roberto Sánchez and his studio is to keep alive the 1970s roots sound and recording techniques.