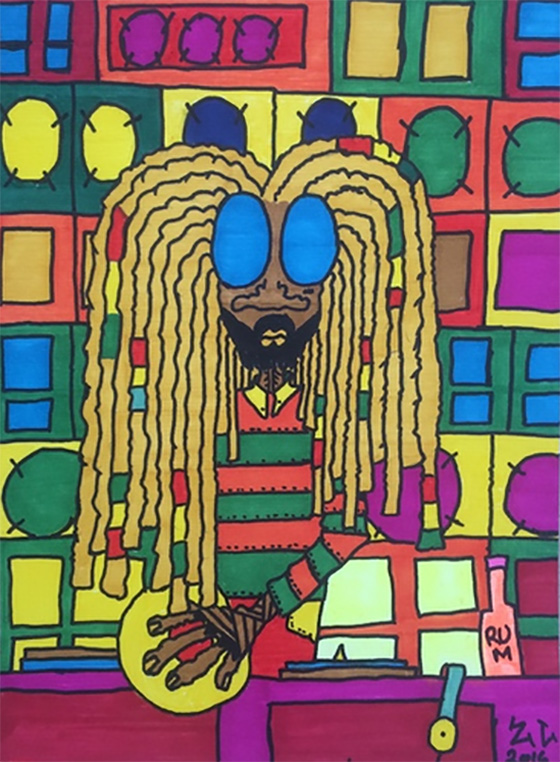 “I wanted to create my own sound system… and to bring life to my soundbowy person… he loves to party just like me.”

The sound system concept first became popular in the 1950s, in the ghettos of Kingston. DJs would load up a truck with a generator, turntables, and huge speakers and set up street parties. In the beginning, the DJs played American rhythm and blues music, but as time progressed and more local music was created, the sound migrated to a local flavor. The sound systems were big business, and represented one of the few sure ways to make money in the unstable economy of the area. The promoter or DJ made his profit by charging admission and selling food and alcohol; often thousands of people were in attendance. By the mid 1950s, sound systems were more popular at parties than live musicians, and by the second half of the decade, custom-built systems began to appear from the workshops of specialists.

It was also around this time that Jamaica’s first superstar DJ and MC, Count Machuki, rose to prominence. As time progressed, sound systems became louder—capable of playing bass frequencies at 30,000 watts or more, with similar wattage attainable at the mid-range and high frequencies—and far more complex than their predecessors. Competition between these sound systems was fierce, and eventually two DJs emerged as the stars of the scene: Clement ‘Coxsone’ Dodd, and Duke Reid. Besides the DJ, who rapped over the music, there was also a selector, who selected the music/rhythm tracks.

As sound systems continued to gain in popularity through the 1960s and 1970s, they became politicized in many instances. Many sound systems, and their owners, were labeled as supporters of a particular political party (such as the PNP or the JLP), but most of the sound systems tried to maintain political neutrality. Nevertheless, as a cultural and economic phenomenon, the sound system was affected by the vast socio-political changes taking place in Jamaica at this time.

The culture of the Sound System was brought to the UK with the mass immigration of Jamaicans in the 1960s and 1970s. Notable UK Sound Systems include Sir Coxsone Outernational Jah Shaka, Channel One, Aba Shanti-I, Jah Observer, Iration Steppas, Fatman International and Saxon Studio International. One of the first sound systems in the United States was Downbeat the Ruler, founded in Bronx, New York, in the late 1970s.

These sound systems were the method in which these migrants were able to maintain their cultural connection with their roots. They broadcast the remixed samples of Reggae beats and created an underground music culture. This culture was separate from the larger population which relied on the radio to provide popular music. These sound systems were played in warehouses, clubs, and street corners. This was not simply just music played on the radio for a few people to hear, but a culture that involved many people was developed out of being consumed by sound through large sound systems.