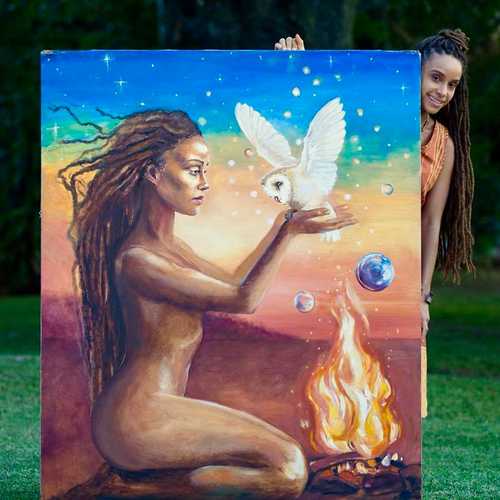 
Without any doubt one of the most eye-catching art record covers is the album cover of Kelissa’s “Spellbound”, released in January 2017. Reggae songstress Kelissa McDonald requested renowned Jamaican visual artist Nakazzi Hutchinson to design the cover art for this album. Actually the album cover was adapted from an original 6×5 metre painting by Hutchinson, which the latter digitised and manipulated until both women were fully satisfied. Nakazzi Hutchinson also collaborated with Kelissa’s Anbessa Music for the artistic direction of the “How Many More” music video in which her mask sculptures were utilised for dramatic effect.

Nakazzi Hutchinson, one of Jamaica’s most talented young artists, graduated from the Sculpture department at the Jamaica School of Art in 2000 at the top of her year, returning to live in Jamaica after spending many of her early years in Barbados. She has exhibited extensively in museums and galleries across the Caribbean and internationally in places such as Miami, New York and Berlin. She has been invited numerous times to participate in prestigious exhibitions alongside Jamaica’s finest and established older artist, where she captured the imagination and awe of a wide and varied audience. She’s popularly known for her ceramic masks, which she hand paints and adorns with natural found materials to depict various popular Caribbean hairstyles. In doing so she seeks to represent a uniquely Afro-Caribbean aesthetic and identity.

Her African name “Nakazzi” means “woman of substance” and through her work she continues to strive to embody this ideal. She considers herself primarily a sculptor but her practice of art varies widely to include charcoal drawings, paintings, batiks, murals and mosaics, and ceramics.