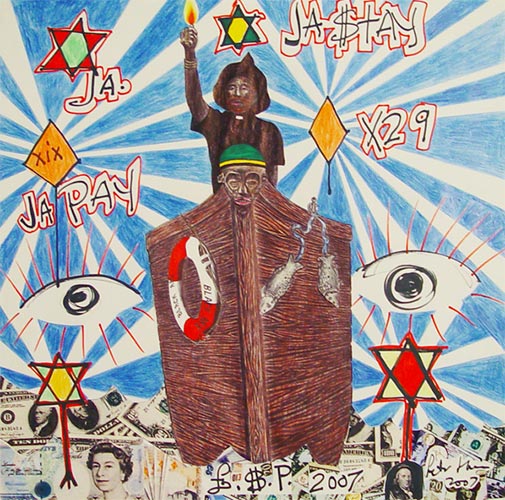 Lee ‘Scratch’ Perry in collaboration with Peter Harris made some truly visionary artworks, based on Harris’ drawings around themes central to the ‘Higher Powers’ film such as destiny, fate, luck and doubt. Perry lent his own visionary input to Harris’ graphic, accomplished pen and pencil drawings. The result is a series of one-off artworks produced in a similar way to the automatic drawings of the Surrealists, with a hint of Primitivism, the magic of Voodoo, and the spirit of urban graffiti artists.


Peter Harris was born in Portsmouth in 1967, and studied Fine Art at Chelsea College of Art & Design, and the University of East London. His work has been exhibited in Europe, America and Asia. In the mid-nineties Harris co-founded ‘Uncle Grey Presents’, a showcase for Artists, Performers and Filmmakers in London’s East End.

His painting installation Hard Rain, inspired by Bob Dylan and The Clash, toured the country as part of the Air Guitar art and music show, and was also shown – along with his London Mennonite Choir collaboration entitled Hymn – at the National Film Theatre. Harris also wrote and directed the play Sir Septimus Vein’s Carnival of Freak, which was shown at the King’s Head Theatre in London.

Revered music maverick Lee ‘Scratch’ Perry was responsible for nearly every hit song that came out of Jamaica in the golden period of seventies reggae. Working with primitive four-track recording equipment in his legendary Black Ark studio, his innovative production techniques led him to the creation of Dub music earning him a reputation as the Jamaican Phil Spector. Perry is one of Rolling Stone’s top 100 Artists of all time.

Working with the cream of the Jamaican reggae scene, most notably Bob Marley and the Wailers creating what is widely considered to be their greatest music, he has also worked with The Clash, The Beastie Boys and Paul McCartney to mention a few. He continues to perform and write new music.

THE HIGHER POWERS BIBLE: FROM GENESIS TO REVELATION

An Illustrated Work by Lee ‘Scratch’ Perry and Peter Harris.

One of Peter Harris and Lee ‘Scratch’ Perry’s more recent collaborative projects (2014-2015) is “The Higher Powers Bible: From Genesis To Revelation”, which takes the form of an updated version of the Holy Bible, shaped by Perry’s unique world view.