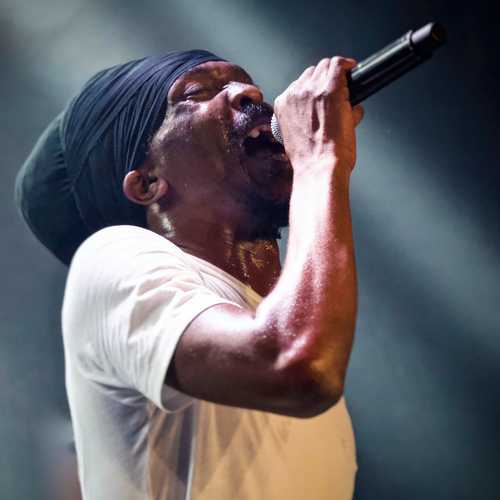 Anthony B – A Majestic Return

Since his first official show in M-Town (Maastricht, the Netherlands) in 1998, Keith Anthony Blair, better known as Anthony B, has risen to the top of the touring reggae circuit. He plays mostly sold out shows and festivals across the globe.

Having not performed in M-Town in over 20 years, it was obvious local reggae fans joined by those coming from far and nearby were eagerly awaiting the return of the ‘Original Fireman’. Since emerging in 1996, Keith Anthony Blair, better known as Anthony B, has risen to the top of the touring reggae circuit. The about 250 reggae and Anthony B fans, who had come out to see him perform witnessed Anthony B delivering a really great and vibrant show.

At the end of the musical warm-up by his European backing band House Of Riddim, Anthony B started singing Bob Marley’s “Time Will Tell” with his trademark powerful voice from off stage. Upon hearing his voice the crowd went literally electric. He then pounced on stage once the riddim of the song “Freedom Fighter”, which actually starts with the first phrases of Marley’s “Run for cover, rebel is taking over”, dropped in. Always bringing an energetic performance, Anthony B jumped and high-kicked like a gymnast throughout his set. He ran through his vast catalog of hits, re-interpreting some of them. He also included a few newer ones like e.g. “King Of My Castle” from his new album, due for release in February 2019.

After “Freedom Fighter”, he launched into “World A Reggae Music”. This was followed by songs such as “Waan Back”, “Reggae Soul Sister”, “There’s A Reward”, “Can’t Stop The Fire”, “Too Much Guns In Town”, “Best Of The Best”, “Don’t Worry” and “Good Life”. One of the crowd’s favorite tunes, of course, is “Raid The Barn”. He did a little teaser of the tune when he began the song and left the stage briefly, only until he was called back on stage by the very enthusiastic audience. Other songs that were welcomed with great approval included “Reggae Pon Top” across the “Revolution” riddim, “Police”, “God Above Everything” and “Real Warriors”.

When Anthony B implored “Give it up for roots and culture, give it up for consciousness”, he received an appropriately enthusiastic response from the audience. He really had them captivated: Swinging arms left-to-right on command, joining him in a sing-a-long to songs like “My Yes And My No” and the show closer, Bob Marley’s “One Love”.

Anthony B proved that he’s one of the most gifted artists with a healthy powerful voice and wealthy lyrical delivery. Overall, it was a fantastic show, even though the setlist lacked his most famous song, “Fire Pon Rome”.