Alborosie Rocks Dublin To Its Roots With Reggae 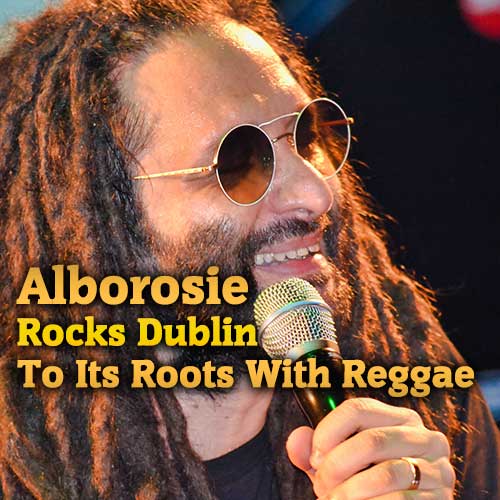 Alborosie Rocks Dublin To Its Roots With Reggae

Back in 2009 I headed for the renowned Rototom Reggae Sunsplash festival, in what was to prove to be its final year in Italy. The priority was to catch a host of veteran roots artists in their pomp and pride, in a manner that only this wonderful festival can present them. However, by festival close, the reality was that the most enduring impact had been made by an Italian native (heretofore unknown to me) named Alborosie.

This modern young artist’s capacity to pay homage to the roots of reggae, including ska and rocksteady, whilst expanding its boundaries into dancehall and ragamuffin, was a top treat to behold. Hence, at every opportunity, the chance to see and hear Alborosie live was seized. And so it was when he chose to stop off to debut in Dublin town, as part of a 37-date tour of Europe in late March 2019, that Reggae Vibes made it a priority to be in the front row!

Like his hero Bob Marley, the words ‘discipline’ and ‘professionalism’ ran right through the performance. Eight hours before showtime the band’s technical engineer Francesco flew in from London to direct a posse of 6 helpers prepare the stage for the night’s proceedings. And just in case anyone thought that Alborosie was going through the motions and didn’t know one city or venue from any of the other 37, he repeatedly exhorted his Dublin and Irish audience to sing along and duet with his powerful renditions. In fact, in one of the show’s more momentous moments he traded his hit song ‘Kingston Town’ for ‘Dublin Town’, much to the delight of the adoring audience.

The show opened with drummer Josie Big Finga setting the tempo, with an ambient atmosphere created by Ottmar Campbell on keys, with no fewer than 3 guitarists rocking the house – including band leader and bassist Michael Fletcher, with the vivacious Valter Vicenti and the youthful, grounded and engaging Garth ‘Duckie’ Forster to the fore. Shortly thereafter 3 vocalists appeared – Sandy Smith, Thamar Williams and (the unrelated) Kemar Williams, serving as the perfect contrast or antidote to Albo.’s sometimes gravel-path sounding voice.

The show itself spanned a whopping action-packed 100 minutes, with many of the more memorable songs from the artist’s ever-increasing inventory to be heard. These included the opening pace-setting track ‘Poser’, followed by ‘Living Dread’, and ‘Strolling’ – where the crowd-stirring bright boy Kemar cut in to take vocal lead with aplomb. Thereafter Albo. cut to his dub station for ‘Can’t Cool’ before the high-pitched ‘Rocky Road’ brought the crowd to fever pitch.

Albo is no mug, hence no punches were pulled when he lit rip with the message ‘No Cocaine’, exhorting the assembly to ‘sing with me Dublin’, as he took his customary back seat, allowing others a share of the limelight. Having started with the message music, he then moved into ‘Rock The Dancehall’, which was followed with a history lesson for the native audience about ‘Ireland, I respect freedom fighters. I fight for justice. I am a freedom fighter too’. This was followed by a lament about commercial radio stations that no longer play message music, unlike in his childhood days, when the favoured artists included the likes of Marley, Tosh and Stevie Wonder.

Thereafter the John Holt classic ‘Police In Helicopter’ got an airing, as Albo. worked his audience in a manner befitting a gym instructor, with extensive arm swaying and striding to ‘come on and sing with me Dublin’. Next up came the ever-popular ‘Herbalist’ set to ska, as the stunning Thamar was afforded the stage for her considerable talents. Indeed, such was the level of audience interaction for ‘ska, ska, ska’ that Albo. and crew took the considerable risk of allowing some on to the tight stage to display their fancy footwork! Of course, any man who can trade his home in Sicily for one in Kingston, Jamaica could hardly be described as being averse to risk!

Having now taken full control of proceedings and exhausted his audience with some hot stepping ska, Albo. cut next to his cover version of Metallica’s ‘The Unforgiven’ from his new album ‘Unbreakable: Alborosie Meets The Wailers United’. In an era when he laments the paucity of good message music and its failure to secure airplay, it is heartening that this – and many more of his releases – had no problem securing a top ten Billboard ranking. The show entered its last lap with some trance type music from the keyboards, Albo. retreating to his dub station with ‘Play Fool To Catch Wise’ interspersed with the notorious Eek-A-Mouse’s ‘Wa-Do-Dem’ and a delightful medley of familiar rhythms and interactive ditties, before felling all before him with ‘Camilla’ and ‘Kingston Town’, thus ensuring that by the end there sure was a fine ‘feel good’ factor prevailing across the hall.

All done, ‘hats off’ to Alborosie and his crew for a fine show. Such was the level of enthusiasm and spontaneity on display that one could be fooled into believing that it was a once-off gig – no such thing!

Any lessons learned? Yes, so fast did the tickets sell out and the venue jam-pack, that next time Albo. hits town we’re gonna make space! Respect all round.