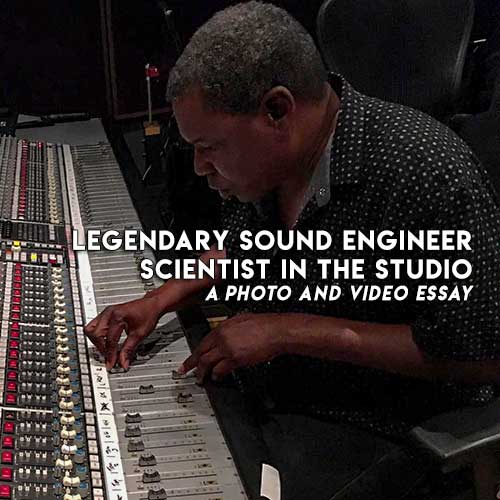 When legendary Jamaican sound engineer Scientist (né Hopeton Brown), with whom I’m in the midst of conducting an exclusive multi-part interview series, asked recently if I wanted to watch him work in the studio, my heart skipped a beat. Immediately, reflexively, as any music fan with half a brain would, I agreed.

When Scientist told me he’d be working with some of the most distinguished musicians in reggae history (including drum-and-bass production duo Sly Dunbar and Robbie Shakespeare, guitarist Tony Chin, and keyboardists Franklyn “Bubbler” Waul and Michael Hyde), and that they’d be recording four tracks voiced by Odel Johnson (a versatile Jamaican-born, Canadian-based artist), I thanked the reggae gods, and smiled.

Honestly I haven’t stopped smiling since, and I hope, after viewing some of the photos and video I took that day at Studio City Sound (owned and operated by Grammy award-winning mixer Tom Weir), you’ll catch some of these irie vibes, too.

Check out this wicked album selection!