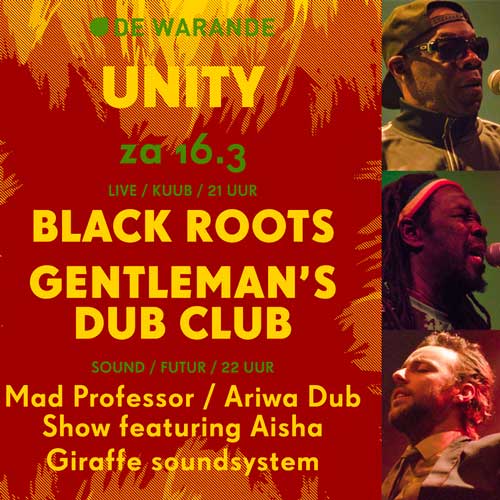 This year the UNITY event in Turnhout, Belgium, brought on stage two bands; the youngsters of Gentleman’s Dub Club and the roots veterans of Black Roots. So, as one might have expected the crowd at this event consisted of a mixture of young and old music fans.

The first band that came on stage was Gentleman’s Dub Club, a nine-piece reggae/electronic collective founded in Leeds UK in early 2006. Throughout the years the band — known for their unique blend of dub, reggae, ‘dubtronica’ and ska – has built a reputation for delivering a super high-energy live show, which obviously had raised the expectations of the people that had come to see them perform. And they surely weren’t let down! The band, with the big voice of frontman Jonathan Scratchley and a big brass formed by Matt Roberts (trumpet) and Kieren Gallager (alto sax), not only made a good impression with their infectious stage presence, but also musically they delivered a fully convincing and satisfying performance, combining tight grooves, a heavyweight sound and live effects. It didn’t last that long before they had a big part of the crowd dancing and skanking to songs like “Midnight Healing”, “Stardust”, “High Grade”, “Music Is The Girl I Love”, “In Your Heart” and “Emergency”.

Formed in 1979 in the St Paul’s area of Bristol, Black Roots became one of the major self-contained reggae bands in the UK througout the 1980s. In the mid-’90s they disappeared from the music scene for about ten years, after having released no less than ten albums. The release of Makasound’s “On The Frontline” (a reissue of the 2 first Black Roots albums) in 2004, more or less marked the return of the roots reggae band and then led to the release of brand new albums like “On The Ground”, “Ghetto Feel”, “Son Of Man” and the recently released “Take It”. Black Roots hadn’t perform in Belgium for a very long time, so their one-off performance in Turnhout was a great opportunity for their Belgian & Dutch fans to catch them live & direct. The band kicked off with two tracks from the “Son Of Man” album: “Poor Old Mama” and “One Ebony Girl”. It was immediately clear that, after all those years, Black Roots is still capable of presenting an appealing roots reggae show with good vibrations. The tight playing musicians and fine horn section (a saxofonist and trumpeter) and the three vocalists treated the crowd to a mixture of old and new songs. These included roots greats such as “Africa”, “All Day And All Night”, “Forgive Them Jah”, “Take It”, “Blackheart Man”, “Reincarnation”, “Landscape” and the anthemic “Juvenile Delinquent”. After having left the stage, they came back for three encore songs of which the social commentary “Tories” was the highlight.