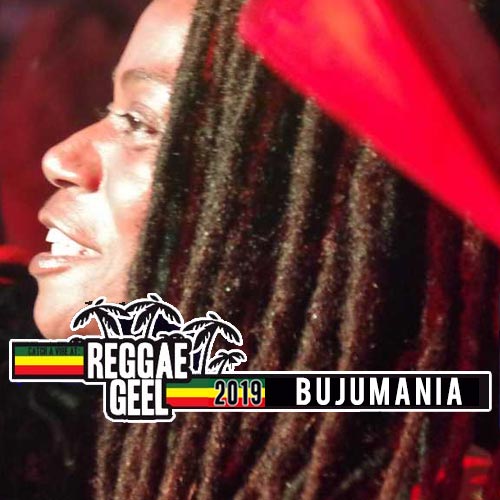 For years the Reggae Geel festival, one of the longest-running reggae festivals in Europe, has been gathering an audience coming from the four corners of the world, consisting of young and old people as well as families with children of various ages. The 41st edition of this annual gathering of a wide range of reggae fans was no exception. As usual the festival’s line-up offered a cross-section of genres. No matter what reggae genre you like and prefer (i.e. ska, rocksteady, reggae, roots, dancehall or dub), it was represented by artists and sounds divided over several stages. Besides the obvious Mainstage (hosted by DJ Amber of Irie FM), the festival grounds furthermore had a dub corner called the 18″ Corner (hosted by IonYouth Soundsystem (Fri) & King Shiloh (Sat)), the Bounce Dancehall tent (hosted by Warrior Sound Int.), and the new Tallawah stage. The latter melted the former Skaville and Yard stages together for the first time.

And also for the very first time there was the One Love Tent – open and with free entrance on Thursday night – to kick off the festival with a pre-party. People who were there to party with the Belgian sounds in charge raved about the great vibes reminiscent of almost forgotten Friday nights when there was no Main Stage programme and the Bounce Dancehall was the place to be to see local and international sounds and artists like U Roy, Josey Wales, Peter Metro, Brigadier Jerry, Echo Minott, Gappy Ranks, General Degree and Shabba Ranks mashing up the place.

It started to rain when we reached the festival grounds, but luckily it wasn’t heavy rain. A few light and short showers of rain came along during the rest of the evening and night. Mixed weather conditions, and also mixed feelings while attending the on forehand chosen performances. Due to an unexpected traffic jam on our way to the festival, we missed Pura Vida & The Congos opening the Mainstage. Catching up with them after their performance, we were told that due to tight stage management it was the very first time that The Congos weren’t able to round off their set with their anthemic song “Fisherman”. People who had attended Pura Vida & The Congos, said it was a great performance with Pura Vida and the four members of The Congos fully living up to expectations, treating the crowd in front of the stage to well known classic songs alongside more recent stuff from their collaboration with Pura Vida.

Before heading to the 18″ Corner to catch Pablo Gad on sound with Black Star Foundation, we checked I-Wayne, who despite bringing a few nice tunes, again didn’t manage to get us really excited (bringing to mind the first time we saw him back in 2012), and Bushman. With his first tunes the roots singer made a good impression and, from what we heard afterwards, his entire set was really good. Also really good was Pablo Gad, although we had rather seen him backed by a full band on the Tallawah stage or even the Mainstage. To our knowledge it was the very first time one of the UK’s most militant and outspoken vocalists of roots reggae music was playing his part in the European Summer festivals. Active since 1977 he showed that vocally he’s still in very good shape causing excitement with great songs such as “Bloodsucker”, “Don’t Push Jah”, “Beggarman’s Child”, “Gun Fever” and “Hard Times”. Definitely a highlight of the Friday night, despite the somewhat annoying bad sound.

Next stop was the Tallawah stage, where The Tennors treated the crowd to Ska and Rocksteady classics in fine style. Original member George ‘Clive Tennor’ Murphy, joined by Howard Spence and Hal Anthony Lewinson, a former member of The Beltones and The Fantels, made a good impression – vocally as well as with their stage presence. Backed by the Leicester band Pressure Tennants, the backup band for Laurel Aitken on many European tours from 1990 up to 2002, The Tennors did a totally engaging set taking the audience on a trip down memory lane with Ska & Rocksteady nuggets such as “The Fits”, “Everything I Need”, “Another Scorcher”, John Holt’s “Take My Hand”, “Weather Report”, Justin Hinds & The Dominoes’ “Carry Go Bring Come” and “Ride Yu Donkey”. Although not in their original line-up anymore, The Tennors were pretty good and rocked the crowd with songs that found instant favor.

Meanwhile the Main Stage was the place to be for dancehall fans as Agent Sasco (formerly known as Assassin) and Busy Signal had taken over the proceedings. Both artists established themselves as top-a-top dancehall artists, but then they also moved into reggae territory. The energetic Agent Sasco was the first to take the stage and came up with a mix of old and new material including “Hand Inna Di Air”, “Child Molester”, “Leave Us Alone”, “Fade Away”, and “Mix Up”. However, just like we witnessed in 2011 and 2016 during his performances at Reggae Geel, it’s seems to be hard for him not to cut songs short when he’s on stage.

All in all Agent Sasco did a decent show, but it actually was Busy Signal who got the enthusiastic reacting crowd really going. Throughout his set he showed to be equally at home with the dancehall and reggae style. Backed by his tight playing backing band he skillfully gave the people what they wanted with songs such as “Unknown Number”, “Nah Go A Jail Again”, “Hustlin'”, “Bedroom Bully”, “Missing You”, “One More Night”, “Nightshift”, “Perfect Spot”, and “Brighter Days”. The intense dancehall & reggae singer finished his set with the huge hit tune “Bumaye (Watch Out For This)”, which got the crowd in a frenzy. Busy Signal not being headliner of the Friday night was truly inexplicable.

The Friday night was capped off with the much anticipated Rockers Live Show brought by Jamaican veterans like Leroy ‘Horsemouth’ Wallace, Big Youth, Kiddus I and Kushart backed by Lloyd Parks & We The People band. Unfortunately they were responsible for the totally disappointing end of the first festival day. The set started very hopeful with songs like “Satta Massagana”, but when we were treated to the out of key sung “Fade Away” and weak versions of “Police & Thieves” and “Mafia” by Lloyd Parks, we decided to leave the festival behind because it was getting a bit too embarrising to see respected reggae veterans not living up to reasonable expectations.

With Buju Banton being the headliner on Saturday, there was some kind of natural mystic in the air. Not that you heard much people talking about the ‘Gargamel’, but a certain level of excitement could be felt as many were eagerly looking forward to his first appearance at Reggae Geel. Thus it was no surprise at all that Bujumania came to full expression when he entered the stage about 20 minutes later than scheduled.

But before Buju Banton and his excellent playing Shiloh Band excited the crowd with a totally satisfying show, there were a few other acts to check. Not Rootz Underground, Randy Valentine, Kumar or Richie Spice, but Half Pint was the first artist we saw on the Mainstage. Although the veteran’s voice wasn’t as good as it was in his heydays, it’s nice to hear him perform well remembered and cherished songs like “Level The Vibes”, “One Big Ghetto”, Political Friction”, “Substitute Lover”, “Just Be Good” and, of course, “Greetings”. No change-over so the Queen of Reggae, Marcia Griffiths, could immediately be announced by DJ Amber. As expected she delivered a captivating live performance full of energy. She had chosen to bring a strong selection of songs to much delight of the crowd including “I Shall Sing”, “Closer To You”, “Fire Burning”, “Young, Gifted & Black”, the Rita Marley song “One Draw”, “What Kind Of World”, “Feel Like Jumping”, Desmond Dekker’s “Israelites”, and Bob Marley’s “”Buffalo Soldier” and “Iron Lion Zion”.

The reason for booking Nigerian Afro-fusion singer & songwriter Burna Boy, who blends pop, American hip-hop and R&B, Jamaican dancehall, and hard UK rap with Nigerian music, may have been mainly done with the intention to draw a broader audience to the festival, but his show on the Mainstage certainly wasn’t our cup of tea. So, off to the Tallawah stage where dub poet Oku Onuora was a more interesting act to catch, not least due to the release of his latest album “I’ve Seen”. Backed on sound by Doctor T (the producer of “I’ve Seen”), the small and barefoot Oku Onuora made a powerful and inspired impression, presenting the people tracks from his new album as well as older material. An impressive perfomance with food for thought.

After a short stay in the hot and steamy Bounce Dancehall, where Soul Shakers mashed up the place, we headed for the V.I.P. Backstage to play a set of tunes on a soundsystem placed on top of a Red Bull Hummer before Beenie Man came on stage.

Being the experienced showman he is, Beenie Man, the self-declared ‘King of Dancehall’, gave a decent performance for an excited and enthousiastic reacting massive. Beenie Man’s energy induced performance was boiling hot. He pulled out hits from his extensive catalogue, while the audience often sung along. His set included crowd favourites such as “Murderer”, “Who Am I”, “Let Him Go”, “Call Me”, “Bad Man Story”, “Baby You Look Fine”, Wickedest Slam”, “Dude”, “Rum & Red Bull”, “I’m Okay” and “Dancehall Queen”, which kept the party in front of the stage full swing. However, to round off the set with a rendition of John Denver’s “Country Roads” was a complete failure.

And then it was time for Buju Banton! Without a shadow of doubt, in all aspects this was the best show on the Mainstage during the two days of the festival. The topnotch 10-piece Shiloh Band, with a great saxophone player and excellent backing vocalists, provided the perfect backing for the Gargamel enabling him to deliver an epic show, which contained many of his most loved songs such as “Destiny”, “Mighty Dread”, “Better Must Come”, “Me & Uno (Bongo Cart)” on the “Wipe Out” riddim, “Only Man” on the “Arab Attack” riddim, “Champion”, “Give I Strength”, “Not An Easy Road”, “Hills And Valleys”, “Untold Stories”, “Driver” and “Murderer”. The highlight of the show was when reggae icon Marcia Griffiths joined Buju on stage to do the combination tunes “Closer To You” and “Steppin’ Out Of Babylon”. For us the only minus was the overcrowded front stage (actually mainly reserved for press and photographers to do their work, but how many really belonged to that category??!!). It forced us to leave the area about half an hour after Buju’s entrance on the main stage was announced by DJ Amber.

Reggae Geel 2019 in a nutshell: A few really disappointing performances, but in the end artists like Bushman, Pablo Gad, The Tennors, Busy Signal, Marcia Griffiths and Buju Banton made this a worthy 41st edition. Looking forward to the next one in 2020.