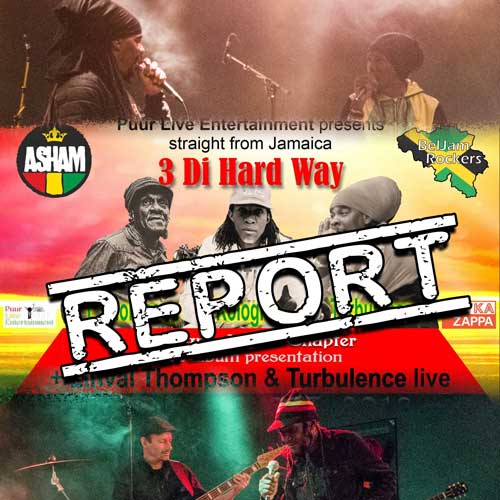 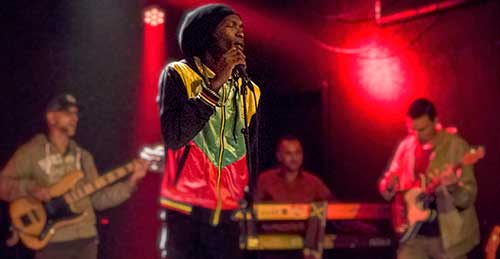 With Kologne himself and his friends, the legendary singer/producer Linval Thompson and Turbulence, and backing bands Beljam Rockers and the mighty Asham Band plus dj for the night, Crucial P, in the line-up it promised to be a throughout enjoyable reggae event. But, really and truly, the album launch event of Kologne’s debut album A New Chapter at the Zappa Club in Antwerp, Belgium, on Friday 18th October didn’t live up to expectations. Apart from the small crowd of people that had shown up, most likely the greatest disappointment for artists, musicians and fans alike was caused by the terrible sound, which the engineer in charge for whatever reason couldn’t control in a decent way. The same goes for the light engineer, who, for the most part of the show, managed to leave the performing artist in the dark while focusing on the backing band.

With about one-hour delay, the first artist to take the stage was Kologne who, backed by the Beljam Rockers, obviously performed most of the tracks from his album A New Chapter, which is available as digital release only. The backing band, only recently formed by experienced Belgian reggae musicians, were the first to encounter problems with the sound, which was kept too far in the background. Besides that, singer and band showed they weren’t fully intuned to each other which was a real pity. Thus Kologne, who’s really a fine singer with an appealing vocal delivery and good tunes, wasn’t able to fully show his skills and talent.

Next up was Linval Thompson backed by the Asham Band (without the horn section this time). Apart from the aforementioned sound problems, there wasn’t much difference with the show they did in August at Helden in the Park in Eeklo, Belgium. Timeless reggae songs like Jah Jah The Conqueror, Jah Jah Dreader Than Dread, Mr. Boss Man, I Love Marijuana, Blood Gonna Run, Inna Di Hills, the latter recently revitalized by dub poet Nazamba, and Train To Zion, were all presented in extended Dub style. The singer’s age – he turned 65 on 12th October – obviously limits his stage movements, but definitely not his voice.

The show continued with Sheldon Campbell aka Turbulence, the self-proclaimed member of the Rastafari movement, who once again proved to be a real entertainer with lots of energy when he’s on stage. It seemed that the artist, known for his righteous lyrics and straight-from-the-heart deliveries, exactly knew how to excite the people in attendance. Besides his own songs he treated them to parts of some instantly recognizable tunes like Murder She Wrote, (What A) Bam Bam, and Another Day In Paradise. At the end of his performance he called his friend Kologne on stage to round off with Comprehend, the duo’s collaboration featured on the latter’s album.