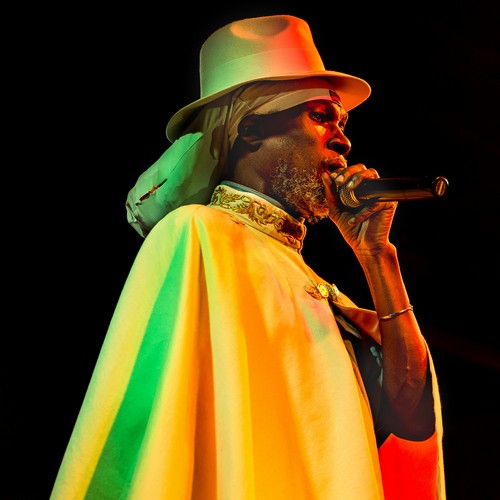 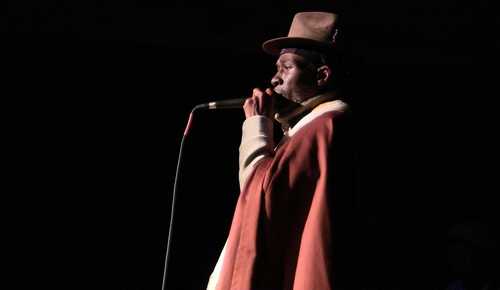 It has been reported on November 5th, that Vaughn Benjamin, known as the lead singer of Midnite and Akae Beka, has unexpectedly died at Tradition Medical Center in Port St. Lucie FL. He was only 50 years old. The cause of his death has not been made public yet. His untimely passing is a great loss for modern Reggae music as he was a cultural icon, a unique artist who touched the heart and soul of many Reggae fans worldwide.

Vaughn Benjamin was a shaman of Rastafari, a Rastaman of creation who implied five thousand years (and more) of human civilization into words, phrases, mantras and parables. Past, present and future merged in the deep insights and wisdom which he proclaimed in the hundreds of lyrics he has written. The basics of the Bible, but also those from apocryphal writings and ancient philosophical works, were interwoven with the contemporary reality. From Seneca and the Gospel of Mary Magdalene to molecular science and economic analysis. From love, compassion and redemption to Macchiavelli, trigonometry and the power of the media. Everything and everyone was connected, through the years. In the wild luxuriant world of knowledge Vaughn Benjamin was an extraordinary guide, the man who opened the listener’s eyes for wonders and miracles of nature, but also for the delusion and passions of the ignorant man.

As a general rule, bear in mind that the name Midnite and later on Akae Beka stood for the singer, songwriter, musician, poet and thinker Vaughn Benjamin, and conversely, whenever he was involved in a music collaboration project, its name would also include these aforementioned names.

At the dawn of the new millennium, one of the most prolific as well as most consistent newcomers in Reggae music coming from outside Jamaica that had put their name on the Reggae map has been Midnite from St. Croix, US Virgin Islands. Since the release of their crucial debut set “Unpolished” in 1997 up till 2015, Midnite has released more than 60 full length albums and despite this high prolific output there has been hardly any decline in quality. Truly exceptional as this cannot be said of any other band or artist in the history of Reggae music as most Reggae acts have found it very difficult to go beyond about five albums without losing their way.

Besides expressing himself through music, he also wrote poems and published a book of poetry in 2005 entitled “Kole Pekude: Word – Sound & Poems of Vaughn Benjamin (Midnite)”, which contained more than 120 poems, ranging from song-length poems to 3 line masterpieces, most of them even more cryptic than Benjamin Vaughn’s lyrics. The rich imagery, depth of content, word mastery, rebel spirit and freedom of thought within these works are as powerful as his recorded songs.

I see why they came back for the spices
to flavor the meet and the mingle
the names signed flatline
bland
Van Gogh for the heightened senses?
a fully decorated Massai
would spice the rigor mortis from the eyes.

Vaughn Benjamin’s electrifying voice seemed an amalgamation of many great voices in Reggae – soulful, chanting, edgy. The man’s potent lyrical style and his brother Ron Benjamin’s exquisite production, vocals, dub, arrangements, keyboard/bass musical directorship formed the nucleus of Midnite’s rootsy sound. The band wove the cultural lyrics of “old skool” roots music with modern day experiences to create a unique listening encounter. Roots Reggae – naked and raw is an apt description for Midnite’s musical style, in which they forgo the frills of extensive remixes, overdubbing and other musical refinements. Midnite’s own productions were released on the Benjamin brothers’ Rastafaria and African Roots Lab record labels. Midnite Branch I, a branch off of the Midnite tree made up of Vaughn Benjamin, Phillip Merchant and Dion Hopkins, debuted with the album “Cipheraw” (2003), which was followed by the albums “Geoman” (2003) and “Project III” (2003).

Throughout the years Vaughn Benjamin got involved in quite a number of collaboration projects. While Vaughn sung and contributed to ALL the productions that bear the name Midnite, his brother Ron only contributed to a handful of the Midnite collaborations (“Assini”, “Nemozian Rasta”, “Eastbound” and a couple of others) The very first collaboration was with St. Croix based I Grade Records production/recording team that consists of guitarist/producer Laurent “Tippy” Alfred and bassist Kenyatta Itola. It led to the release of the “Nemozian Rasta” album in 2001. In the following years five more collaboration albums with I Grade Records were released: “Assini” (2002), “Vijan” (2003), “Let Live” (2005), “Jah Grid” (2006) and “Rule The Time” (2007). Regular Midnite musicians were only partly involved in the recordings for these albums. The next collaboration was with Ras L, a talented young producer from St. Croix who played keyboards and bass on the song “Old Robe” off of Midnite’s “Assini” album. “Full Cup” (2004), an experimental album of hip hop roots production, and “Thru & True” (2006), more grounded in the roots tradition than its predessor with exceptionally heavy basslines throughout, were the results of this collaboration.

Then Vaughn Benjamin travelled to New Mexico to record with the Mystic Vision crew. Their first collaboration project “Current” appeared in 2005, followed by “New 100” in 2006. In that same year the Midnite-Lion Tribe collaboration album “Suns Of Atom” saw the light of day, a collection of mostly-live instrumentation roots reggae with some interesting twists, innovative use of horns, sitars, tablas and other unique instruments. The double cd “Standing Ground” was released in 2008, another project done in collaboration with The Lion Tribe crew. Then, in 2010, Lion Tribe and Vaughn Benjamin picked up where they left off from “Standing Ground” and the third album “Momentum” was released. In 2007 he did a collaboration project with Lion I of Higher Bound Productions out of Grass Valley, CA. The release of their “Bless Go Roun” set, a full plate of mystical modern roots with outstanding production that is both ambient and heavy, was Vaughn Benjamin’s sixth album release of 2007!! The 2010 released “Ark A Law”, featuring some hard-hitting hip hop production by J-Will and Ishence, was the second album that evolved from this collaboration. Together with I Grade Records, one of the most fruitful collaboration projects was with Rastar Productions. Between 2007 and 2009 they released the following powerful albums: “Better World Rasta”, “Supplication To H.I.M.”, “To Mene” and “Ina Now”.

Besides the aforementioned ones, Midnite also did quite a few other collaborations. Actually the very first collaboration album was “Kayamagan” with Desmond Williams (engineer and co-producer of Thievery Corporation, and in 1993 an apprentice of renown engineer Scientist), which they recorded in Washington DC in between the albums “Unpolished” and “Ras Mek Peace”. This album captures Vaughn Benjamin’s word sound at a crucial, formative period at the end of the ’90s. In 2007 a 13-track collaboration between Donny Dread and Vaughn Benjamin called “Aneed” was released by Groundbreaking Records. One of the other releases in 2007 was the very strong “Infinite Quality”, which was produced by Lustre Kings, Zion High and I Grade. Together with Vaughn Benjamin they created lush and beautifully arranged contemporary roots reggae – with a heavy deep roots sound, but balanced with horns, flutes, live strings and other unique instrumentation. The following year they even released a dub version of the album (“Infinite Dub”). A collaboration project with an African artist was destined to happen, and so it did with the release of the “For All” cd, which saw Vaughn Benjamin teaming up with the legendary Senegalese kora player and producer Youssoupha Sidibe.

Variety of musicians and producers

The good thing about teaming up with a variety of musicians and producers to do collaboration projects was that Midnite was able to change the vibes, although it was always deep roots music. It continuously produced very interesting results and it certainly was one of the reasons that Midnite managed to maintain the quality of their output throughout. Midnite was one of the most successful self-contained acts playing reggae in the U.S. — where they considered them THE pre-immenent group of modern roots reggae. However Midnite didn’t hit everyone. Some of the reasons often expressed was that “they bring a depressing sort of reggae”, “their riddims are really boring”, “their very deliberate, minor key one-drop style of reggae doesn’t appeal” and “I just don’t get their vibe, it’s too sinister”.

In February 2015, Midnite cancelled their tour and postponed dates “due to a life changing medical emergency, convictions, and revelations”. Later that year Vaughn Benjamin reformed the group without his brother and renamed the band Akae Beka. He said that the band’s new name came from the Book of Enoch, chapter 68, verse 20-24. Akae Beka’s first performance took place in Denver, Colorado on July 17, 2015 in honor of Nelson Mandela Day. After the release of the “Homage To The Land” album in July, 2015, 8 more albums followed with “Mek A Menshun” being to latest album release. However, don’t expect this to be the last album by Midnite or Akae Beka as there are still many albums unreleased (said by Vaughn Benjamin in a 2014 interview).