REGGAE GOT SOUL | THE ORIGINALS PART ONE

Jamaican artists have continued to cover or transform American r&b and soul tunes up to the present day. In a series of articles, of which this is the first one, we focus on noteworthy cover versions, mostly being the initial ones, recorded by well known and lesser known Jamaican singers and vocal groups. 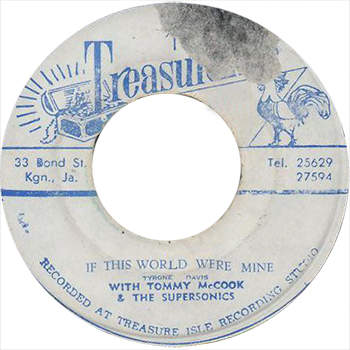 Tyrone Evans – If This World Were Mine

Marvin Gaye & Tammi Terrell – If This World Were Mine

TYRONE EVANS – IF THIS WORLD WERE MINE

In 1969, Duke Reid produced Garth “Tyrone” Evans’ killer reggae version of Marvin Gaye & Tammi Terrell’s heartfelt song “If This World Were Mine” from 1967. In Jamaica it appeared on his Treasure Isle label, while the same year Trojan Records released it in the UK. The riddim was played by Tommy McCook & The Supersonics, Treasure Isle’s in-house studio band at the time. The late Tyrone Evans aka Don Evans was a founding member of The Paragons and embarked on a less notable solo career after the group had disbanded. Also other reggae artists recorded versions of the song including Dennis Brown, Junior Delgado, Errol Dunkley, Lymie Murray, Black Crucials, and Carroll Thompson & Peter Hunnigale. 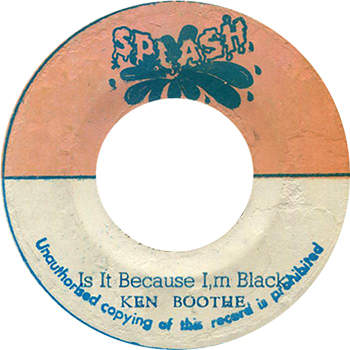 Ken Boothe – Is It Because I’m Black?

Syl Johnson – Is It Because I’m Black

KEN BOOTHE – IS IT BECAUSE I’M BLACK?

The original is a classic song by American blues & soul singer Syl Johnson that hit #11 on the Billboard charts in 1969. listening to the attitude and the grit in his vocal performance it’s like he’s giving a sermon in a church, describing – in metaphor and similes – what it’s like to be black in America. This impressive thoughtful song has been covered by Ken Boothe for producer Lloyd Charmers who put it out on his Splash label in 1973. In the UK the song was released by Trojan Records with the addition of strings and horns. Later cover versions came from artists like Senior Soul aka Lloyd Williams, Nicky Thomas, Delroy Wilson, Everton Blender, Samory I, and Yeza. 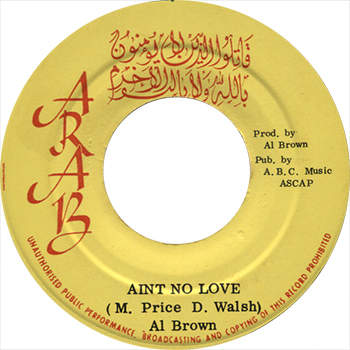 Soulful Jamaican singer Al Brown, was a real cover version specialist who’s mostly known for his cover of Al Green’s tune “Here I Am”, which was a big hit in 1974. This was after he had recorded a few tunes for Studio One – “Ain’t Got No Soul” and “no Soul Today” – as the 1960s turned to the 1970s. By 1973 he was fronting the Skin, Flesh & Bones band with whom he enjoyed his aforementioned biggest hit success. Following his two cover hits, “Here I Am” and then Neil Diamond’s “Stones”, Al Brown and the Skin, Flesh & Bones band delivered a notable version of Bobby ‘Bue’ Bland’s 1974 minor hit “Ain’t No Love In The Heart Of The City” from the veteran bluesman’s “Dreamer” LP. While it is ostensibly a love song, some have also heard it as a lament on urban poverty and hopelessness. Al Brown’s self-produced 1975 reggae version even changed most of the lyrics to magnify this emphasis. 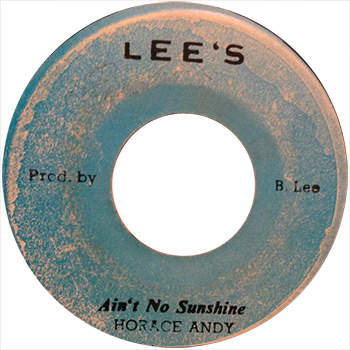 One of reggae’s most distinctive singers, Horace Andy, delivered the definitive reggae version of soul singer & songwriter Bill Withers’ evergreen “Ain’t No Sunshine”, although Ken Boothe’s version produced by Lloyd Charmers isn’t far behind. Originally released in 1971 as the B-side to another song called “Harlem”, the Booker T. Jones produced “Ain’t No Sunshine” was preferred by disc jockeys, and it became Bill Withers’ first huge hit. Horace Andy’s 1973 reggae version was produced by Bunny ‘Striker’ Lee and released on the Lee’s label. Horace Andy also did a version for Coxsone Dodd (featured on the 1974 released Studio One album “The Best Of Horace Andy”), but that wasn’t as good as the one for Bunny Lee. Jimmy Lindsay also recorded a version of “Ain’t No Sunshine”, which was included on his 1979 album “Reggae In A Babylon”, while Junior Murvin recorded an acoustic version for his 2007 released “Inna De Yard” album. The most recent interpretation (2020) was done by Nadine Sutherland in collaboration with producer Salaam Remi. 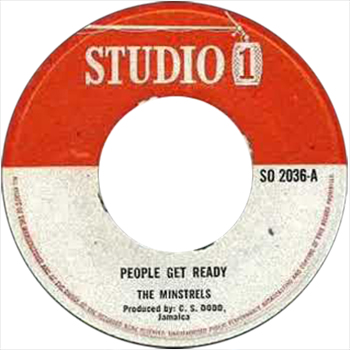 The Minstrels – People Get Ready

The Impressions – People Get Ready

THE MINSTRELS – PEOPLE GET READY 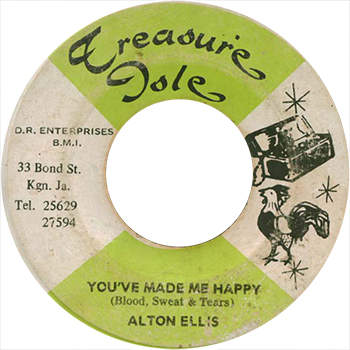 Alton Ellis – You Made Me Happy

>Brenda Holloway – You Made Me So Very Happy

ALTON ELLIS – YOU MADE ME HAPPY

Co-written and first recorded in 1967 by Brenda Holloway, “You’ve Made Me So Very Happy” was covered by lots of pop and soul artists including Blood, Sweat & Tears, The Temptations, The Miracles, Bobbie Gentry, Cher, Lou Rawls, Sammy Davis Jr., Shirley Bassey, and Gloria Estefan. By the time Alton Ellis recorded his soulful version at Duke Reid’s Treasure Isle studio in Bond Street, Kingston in 1970, the singer-songwriter was firmly established as one of the island’s most celebrated artists, having enjoyed numerous ska, rock steady and reggae hits over the preceding decade. He also cut the song for Duke Reid’s main rival, Clement ‘Coxsone’ Dodd, but it is the Treasure Isle cut that remains his seminal interpretation of the composition. 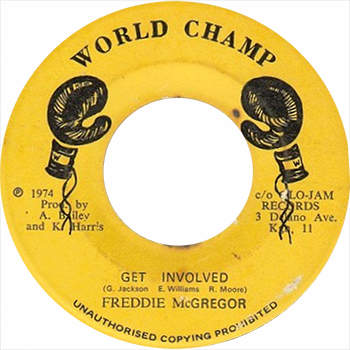 George ‘Soule’ Jackson’s 1973 released 7″ vinyl single “Get Involved” is a deep funky southern soul vocal cut on Fame Records, which was produced by Rick Hall and recorded at the Fame Recording Studio, the home of the Muscle Shoals Sound. This plea for voter registration of the gifted singer/songwriter from Memphis evidently struck a chord with Freddie McGregor who recut it with Soul Syndicate for producers K. Harris & A. Bailey’s World Champ label in 1974. The Jamaican singer truly made a killer reggae version of this amazing tune. 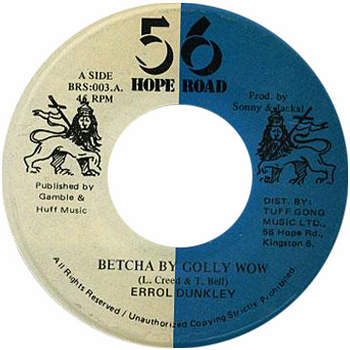 Produced by Sonny & Jackal, gifted Jamaican singer Errol Dunkley turned his fabulous cover version of The Stylistics’s tune into a big Lovers Rock tune. Arguably, some find it even way better than the original. The Stylistics are an American (Philadelphia) Soul group that achieved massive chart success in the 1970s with several songs including “Betcha By Golly, Wow”. Actually, the latter’s original title is “Keep Growing Strong”, a tune written by Thom Bell and Linda Creed, originally recorded by Connie Stevens under the Bell Records label in 1970. The song later became a hit when it was released by The Stylistics in 1972 under its better known title, “Betcha By Golly, Wow”. 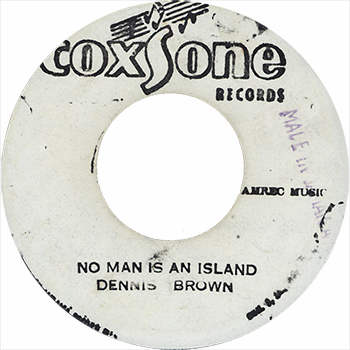 Dennis Brown – No Man Is An Island

The Van Dykes – No Man Is An Island

DENNIS BROWN – NO MAN IS AN ISLAND

Dennis Brown recorded his debut single “No Man Is An Island” when he was aged between twelve and thirteen, during 1969 and 1970 for Clement Seymour Dodd’s Coxsone Records imprint. It actually was a cover song he had originally worked on with producer/singer Derrick Harriott. The single was released in 1970 and then featured as opener and title track on Dennis Brown’s released 12-track debut album. There’s also a rare 1990s remake of the song done by Dennis Brown for producer ‘Fatis’ Burrell’s Xterminator label. “No Man Is An Island” was originally recorded by a Fort Worth, Texas trio called The Van Dykes, who released it in 1966, based on a 1624 poem by the English poet John Donne. It has also been covered by Horace Andy, who released it in 1978. In 1997 George Nooks recorded it for his album “My Name Is George Nooks”, while in 2004 Courtney Vibes released a cover version on Neville Beckford’s Original Music label. Also singer Dona V did a version for Studio One that appeared on his 2000 released album “Cry For Tommorrow”. 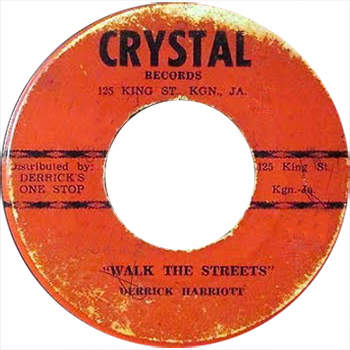 Producer/singer Derrick Hariott recorded Jimmy Hughes’ song “You Might As Well Forget Him” under the title “Walk The Streets”. Most people will know this sog better by the Tams’ version, or maybe even Tommy Quickly and the Remo Four. Jimmy Hughes’ song may actually have been the very first version of the song recorded, as this came out on single in 1963 while the Tams version was out on an LP in 1964. Jimmy Hughes’ “You Might As Well Forget Him” was cut at Rick Hall’s Fame studios in Muscle Shoals, Alabama and was written by Atlanta, Georgia native Tommy Roe. Derrick Harriott, always rated as one of Jamaica’s most soulful singers, came up with a killer rocksteady version of the song which came out in 1967 on his own Crystal Records imprint.