Jamaican artists have continued to cover or transform American r&b and soul tunes up to the present day. In a series of articles, of which this is the second one, we focus on noteworthy cover versions, mostly being the initial ones, recorded by well known and lesser known Jamaican singers and vocal groups. 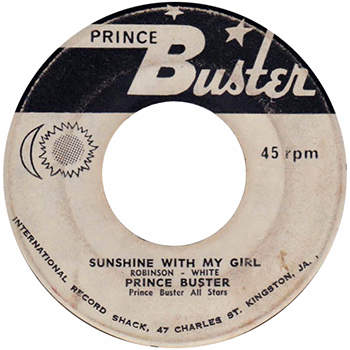 Prince Buster – Sunshine With My Girl

The Temptations – My Girl

PRINCE BUSTER – SUNSHINE WITH MY GIRL

Cecil Bustamente Campbell, known professionally as Prince Buster, is regarded as one of the most important figures in the history of ska and rocksteady music. The records he released in the 1960s inspired many reggae and ska artists in the following decades. In 1966, he put out the single “Sunshine With My Girl”, a wicked upbeat cover version of The Temptations’ soul classic. The Temptations’ song was recorded for the Gordy (Motown) record label in 1964. Written and produced by the Miracles members Smokey Robinson and Ronald White, it became the group’s first US number 1 single, and is today their signature song. It actually was the first Temptations single to feature David Ruffin on lead vocals. After some persuasion from Ruffin’s bandmates, Smokey Robinson had the Temptations record “My Girl” instead of the Miracles, who were originally going to record the song. The opening bass notes are recognized around the world. 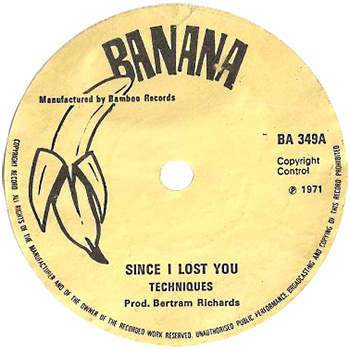 The Techniques – Since I Lost You

Jimmy Ruffin – Since I’ve Lost You

THE TECHNIQUES – SINCE I LOST YOU

The Techniques recorded their beautiful cover version of “Since I’ve Lost You” for producer Bertram Richards in 1971. Initially their single was mislabeled as the next Banana record in sequence; BA 350, The Heptones – Freedom Line b/w Sound Dimension – Freedom Line Version. Many copies were then relabeled correctly by simply overlaying a new sticker. The original was done by Jimmy Ruffin, one of the most underrated of all Motown’s artists. The magic of this 1967 released record is the soul singer’s totally effortless delivery that runs plenty deep. While his little brother David was busy learning “My Girl,” big brother Jimmy was delivering the goods with “Since I’ve Lost You”. 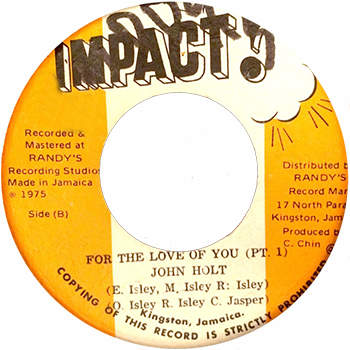 John Holt – For The Love Of You

Isley Brothers – For The Love Of You

JOHN HOLT – FOR THE LOVE OF YOU

John Holt, the definitive Jamaican stylist, did a beautiful cover version of The Isley Brothers’ song. Recorded at Randy’s Studio 17 and produced by Clive Chin, with backing by the In-Crowd, John Holt’s “For The Love Of You” is a masterful interpretation and the epitome of Jamaican soul. In the UK, Trojan Records released John Holt’s version with a lavish strings arrangement done in London by Tony Ashfield. The Isley Brothers’ “For The Love Of You” (sometimes titled “For The Love Of You (Part 1 & 2)”) was released in October 1975 as the second single off their landmark album, “The Heat Is On”. The song later became a crossover hit for the Isley Brothers and one of their most enduring records by their legion of fans. 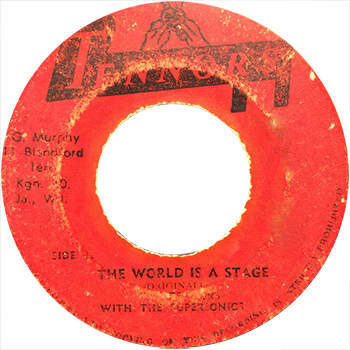 The Tennors – The World Is A Stage

The Fantastic Four – The Whole World Is A Stage

THE TENNORS – THE WORLD IS A STAGE

The origins of The Tennors were a vocal duo formed by George ‘Clive’ Murphy and Maurice ‘Professor’ Johnson called The Tennor Twins. They became The Tennors when the duo was later joined by Norman Davis, at which time ‘Professor’ Johnson became the lead vocalist. Their first single, “Pressure And slide”, was one of the major Jamaican hits for the year 1967. The Tennors then went on to form their own label on which they released their interpretation of The Fantastic Four’s 1967 song “The Whole World Is A Stage”, which on the label was credited to The Tennors with the Supersonics. The Fantastic Four (also known as Sweet James and The Fantastic Four) were a Detroit based soul group with their first single on Ric-Tic, “The Whole World Is A Stage,” being their only big hit single. 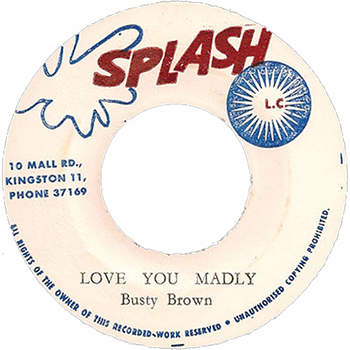 The Fantastic Four  – I Love You Madly

The 1968 released single “I Love You Madly” was another classic soul song by The Fantastic Four. It was covered by Busty Brown and released in 1970 on the Splash label and in the UK on the Punch imprint of Pama Records. The former singer for The Messengers, known for his distinctive falsetto, joined The Chosen Few in the early 1970s. Along with A.J. Franklin aka Franklin Spence and Richard McDonald, he was a member of the group’s classic line-up that recorded for producer Derrick Harriott. There have been more versions of “Love You Madly” done by Jamaican artists, including Delroy Wilson, Cornell Campbell, and Dennis Brown (2 versions). 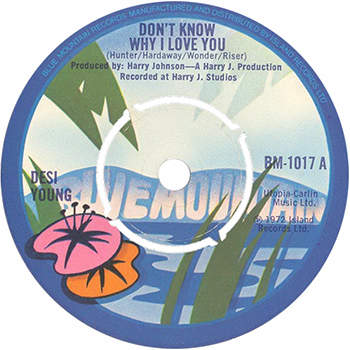 Desi Young – Don’t Know Why I Love You

Stevie Wonder – Don’t Know Why I Love You

DESI YOUNG – DON’T KNOW WHY I LOVE YOU

Produced by Harry Johnson, Desi Young recorded a rendition of Stevie Wonder’s “Don’t Know Why I Love You” at the producer’s Harry J, Studios in 1972. He gave Harry J. a terrific lick-over of the tune with pensive trombone, that’s so sweet and open in candour. The song came out in the UK on a Blue Mountain 7″ single b/w Bongo Herman’s “S.90 Skank”. Stevie Wonder’s timeless classic is a song from the album “For Once In My Life”, released by Motown in 1968. It also served as the B-side for the 1969 hit single “My Cherie Amour”. 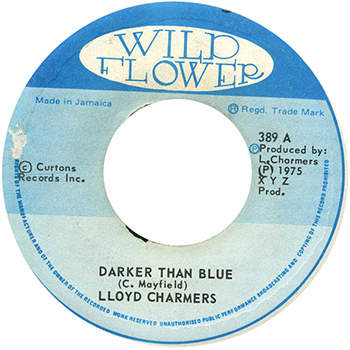 “We Are The People Who Are Darker Than Blue”, a song first heard on Curtis Mayfield’s 1970 released debut solo LP entitled “Curtis”, proved a brilliant vehicle for producer/singer Lloyd Charmers’ persuasive falsetto. Lloyd Charmers also sings all the backing vocals and plays the haunting melodica part as well; the riddim was played by Third World and was recorded early 1975. Devon Russell recorded a version for his 1993 released album “Darker Than Blue”, which was a tribute to Curtis Mayfield wholly comprising Mayfield cover versions. Steel Pulse featured an interpretation of the song on their 2004 album “African Holocaust”. 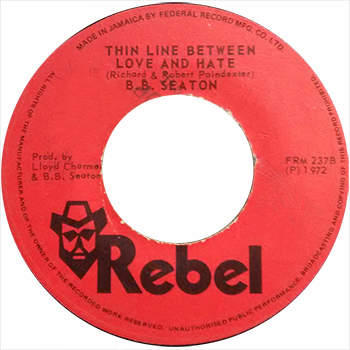 The Persuaders – Thin Line Between Love And Hate

Harris Lloyd ‘B.B.’ Seaton, also known as ‘Bibby’, left The Gaylads in 1972 to restart his solo career. The Jamaican reggae singer, songwriter, and record producer had several hits the same year with “Accept My Apology”, “Lean On Me”, and “Thin Line Between Love And Hate”. The latter was a rendition of the The Persuaders’ gold hit single in the 1970s, which sold over a million copies. The Persuaders were a New York City-based R&B vocal group and their sound involved close harmony, Douglas “Smokey” Scott’s rough but emotive lead vocals and a heavily orchestrated soul and R&B approach, the trademark of their producers, Richard and Bobby Poindexter. 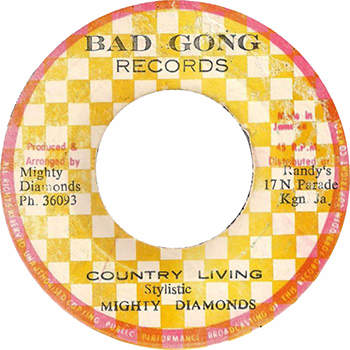 Formed in 1969 in the Trenchtown area of Kingston, the Mighty Diamonds comprised lead vocalist Donald ‘Tabby’ Shaw, and harmony vocalists Fitzroy ‘Bunny’ Simpson and Lloyd ‘Judge’ Ferguson. Their smooth harmonies and choreographed stage show were inspired by Motown vocal groups of the 1960s, with ‘Tabby’ listing The Temptations, The Stylistics, The Impressions, and The Delfonics as influences as well as Jamaican rocksteady artists such as John Holt and Ken Boothe. In 1975, they recorded an excellent version of The Stylistics’ “Country Living” with great guitar licks and sweet vocals for Joseph Hoo Kim of Channel One. It was one of the singles that cemented their status as one of the top Jamaican groups of the time. Later they re-recorded the song including a version for producer ‘Gussie’ Clarke in 1983 and a simple guitar and harmonies rendition of the song for their 2008 “Inna De Yard” album. In 1973, two years before the Mighty Diamonds’ initial single came out, The Jamaican Eagles’ interpretation of the Stylistics song was issued on the Harry J. label. Sandra Cross’ cool and relaxed Lovers Rock version with The Wild Bunch, produced by Mad Professor, was released in 1985. 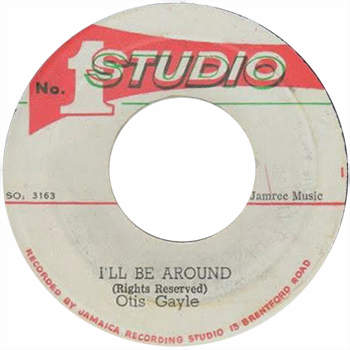 Otis Gayle – I’ll Be Around

The Spinners – I’ll Be Around

OTIS GAYLE – I’LL BE AROUND

Otis Gayle’s recorded a hurtful and beautiful cover of the classic “I’ll Be Around” by American R&B vocal group The Spinners (known as “Detroit Spinners” in the UK) for Coxsone Dodd’s Studio One imprint. It’s truly a killer soul to reggae version, done over a sublime riddim laid by the Sound Dimension which was featured on the version side of the 7″ single. Both the amazing original song by The Spinners, co-written by Thom Bell and Phil Hurtt, and Otis Gayle’s do-over came out in 1972. Initially “I’ll Be Around” was released as the B-side of the group’s first single on Atlantic Records, with “How Could I Let You Get Away” being the A-side. The song became an unexpected hit, reaching sales of over one million copies. The Kingston-born Otis Gayle started his music career during the 1960s as a vocalist with Byron Lee and The Dragonaires. Later that decade, he migrated to Canada but maintained musical ties with Jamaica, recording intermittently for Studio One. ‘I’ll Be Around” and “Lady”, are two of the singles he did for legendary reggae label during the 1970s.