Jamaican artists have continued to cover or transform American r&b and soul tunes up to the present day. In a series of articles, of which this is the sixth one, we focus on noteworthy cover versions, mostly being the initial ones, recorded by well known and lesser known Jamaican singers and vocal groups. 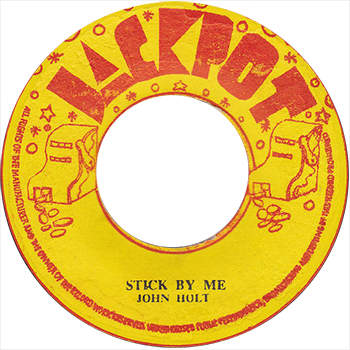 JOHN HOLT – STICK BY ME

After John Holt had left The Paragons for a successful solo career in 1970, he was working often with producer Bunny Lee and together they released several memorable singles including “Stick by Me,” which was the biggest-selling record in Jamaica in 1971. The original version of the John Holt song was written by James Sheppard and was first released by Shep and The Limelites, an American doo-wop trio of the early 1960s. They are best known for their 1961 hit recording, “Daddy’s Home”. Later songs, like the 1961 released “Stick By Me”. were not as successful as “Daddy’s Home”, but still sold well. Other reggae versions of the Shep & The Limelites song were also done by Dennis Brown, Delroy Wilson, George Nooks, Lenny Roy & Papa Biggy, Neisha K, and Fiona. 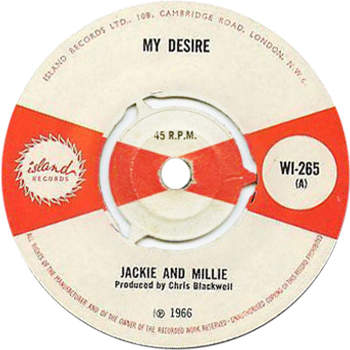 Most likely the best known Jamaican version of The Cliques’ great doo-wop ballad “My Desire” from 1956 has to be credited to John Holt, who recorded it for producer Bunny ‘Striker’ Lee in 1974. Perhaps lesser known is the fact that in that same year Johnny Clarke also cut a take for the prolific producer. However, the very first cover version was done by Jackie Edwards and Millie Small and released in 1966. Wilfred Gerald Edwards worked as a singer and songwriter for Chris Blackwell’s Island Records, recording as a solo artist and also duets with Millie Small. The latter, best known for her 1964 massive hit “My Boy Lollipop”, was Jamaica’s first international recording star, and its most successful female performer. The Cliques were a L.A. doo-wop/r&b act of the late 1950s. The vocal group was mainly a moniker for singer/songwriter Jesse Belvin’s work but launched as a duet with Eugene Church. 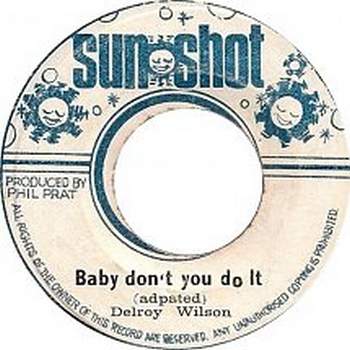 DELROY WILSON – BABY DON`T YOU DO IT

Marvin Gaye was one of Delroy Wilson idols, so it’s obvious that he was going to cover a few of the soul singer’s songs. One of them was an excellent cover of “Baby Don`t You Do It”, which was produced by Phil Pratt and originally released on the Sun Shot label in 1971. The great Delroy Wilson sings over an incessant Phil Pratt riddim with Bobby Kalphat’s keyboards to the front of the mix. Written by Holland-Dozier-Holland, Marvin Gaye’s song was released in 1964. For the first time featured on a Marvin Gaye record were Motown’s top session girl group, the Andantes. The song was originally written and intended for The Supremes, but eventually reassigned to Marvin Gaye to record. The song discusses a man who is at a standstill with his girlfriend, who he feels is neglecting his love stating “Don’t break my heart/… I’ve tried to do my best”. 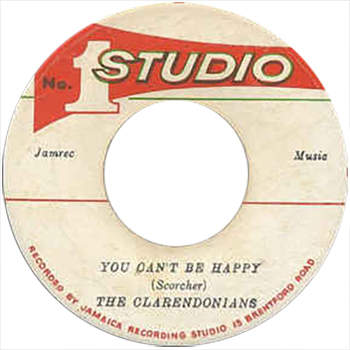 THE CLARENDONIANS – YOU CAN’T BE HAPPY

The Clarendonians, originally Fitzroy “Ernest” Wilson and Peter Austin, came together in 1963. At that time Peter Austin was 17 years old, while Ernest Wilson was only 11. The duo won several talent contests and recorded their debut single, “A Day Will Come”, at Federal Records with producer Leslie Kong. Leaving producer Leslie Kong, they moved on to Duke Reid’s Treasure Isle studio, before they came to the attention of Studio One boss and producer Coxsone Dodd. While they were still in their early teens, Dodd took the duo into the studio, and recorded a series of singles including “Rudie Gone a Jail”, “Sho Be Do Be”, “Rudie Bam Bam”, and “Darling Forever” – all chart-toppers in Jamaica. Also the duo’s cover of The Four Tops’ flip of their 1966 released “Reach Out I’ll Be There” single, “Until You Love Someone” (retitled “You Can’t Be Happy”), belonged to these chart-toppers. 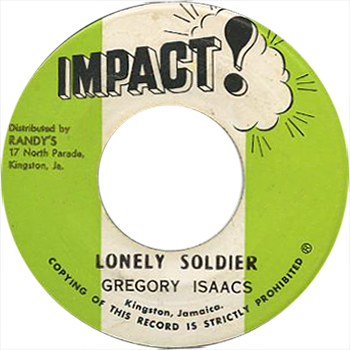 Mike Williams’ soul classic “Lonely Soldier” was the exciting debut for the soulful singer who, with this wailing blues ballad, bemoaned a soldier’s life. The song was released on Atlantic Records in 1966. Although a reviewer stated “This is R&B dynamite, and such an outstanding performance that it could be a big pop hit”, it neber happened. The single peaked at number 85 in Billboard’s Hot 100 and at number 38 in the R&B chart. Gregory Isaacs, a legend in his own time and one of the most popular and versatile reggae singers of the late ’70s, did a wicked interpretation of the tune for producer Clive Chin, who released it on the Impact label in 1973. The song was also released on the singer’s own African Museum label and in the UK on Green Door. 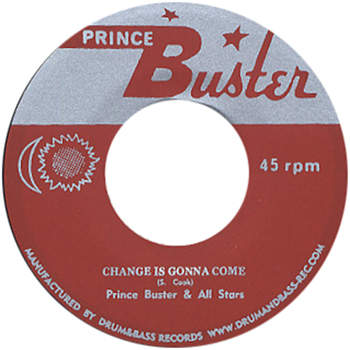 Prince Buster recorded and released a wonderful rocksteady version of Sam Cooke’s song “A Change Is Gonna Come” in 1967. The same year, one of the definitive rocksteady vocal groups, The Heptones, also did a nice version of Sam Cooke’s song at Studio One for Coxsone Dodd, which the next year was followed by Ken Parker’s version for Bunny Lee. The 1964 released original song was inspired by various personal events in Sam Cooke’s life, most prominently an event in which he and his entourage were turned away from a whites-only motel in Louisiana. Cooke felt compelled to write a song that spoke to his struggle and of those around him, and that pertained to the Civil Rights Movement and African Americans. Though only a modest hit for Sam Cooke in comparison with his previous singles, “A Change Is Gonna Come” is widely considered his best composition. 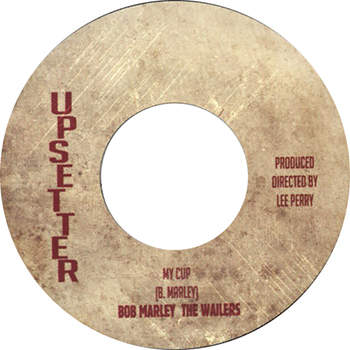 BOB MARLEY & THE WAILERS – MY CUP

Although some consider that Bob Marley wrote this song to express the overwhelming pressure of being an advocate for the poor who found success (cup running over), it’s actually a cover of James Brown’s “I Guess I’ll Have To Cry Cry Cry”, recorded with producer Lee ‘Scratch’ Perry. “My Cup” was released in 1970 as a 7″ single on the Upsetter label and featured on the album “Soul Rebel”. The original song, written and performed by James Brown, was released as a single in 1968 and charted number 15 in the R&B chart and number 55 in the Pop chart. This song is noted as the last single by James Brown to give label credit to his vocal group, The Famous Flames.

I've Passed This Way Before

THE FEDERALS – I’VE PASSED THIS WAY BEFORE

While studying at Kingston Technical High School, David Scott aka the singer & deejay Scotty, together with fellow students Valman Smykle and A.J. Franklin (born Franklin Spence), formed a reggae trio called The Federals. They attracted the attention of reggae producer and music promoter Derrick Harriott, who helped them record a series of singles. Their first single, “Penny For Your Song”, was a local hit, but subsequent singles including their 1968 cover of Jimmy Ruffin’s “I’ve Passed This Way Before” failed to chart. Jimmy Ruffin was an American soul singer, and elder brother of David Ruffin of The Temptations. He had several hit records between the 1960s and 1980s, the most successful being the Top 10 hits “Hold On (To My Love)” and “What Becomes Of The Brokenhearted”. “I’ve Passed This Way Before” was the follow-up to the latter and like that song it again casted the singer as the lonely loser in love. 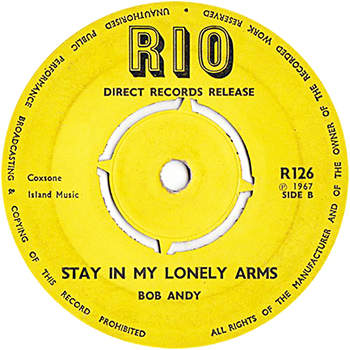 Keith Anderson, better known as Bob Andy, is one of reggae’s most influential singer/songwriters. Many of his songs, written both for other artists as well as for himself, have been covered numerous times and are considered reggae standards. Now and then he also did a cover version of a song done by others, like in this case The Four Tops’ “Stay In My Lonely Arms”, a song that Holland-Dozier-Holland first recorded with the Four Tops in 1965 and then shortly after with the Elgins in 1966. In late 1967, the Supremes had their turn at recording the song which would prove to be one of the last songs that Holland-Dozier-Holland produced for the group before leaving Motown in early 1968. Produced by Coxsone Dodd in 1967, Bob Andy’s version was released in the UK on the flip of The Ethopians’ “Dun Dead A’ready”, which came out on the Rio label. It was also featured on the artist’s Studio One LP “Bob Andy’s Song Book”. 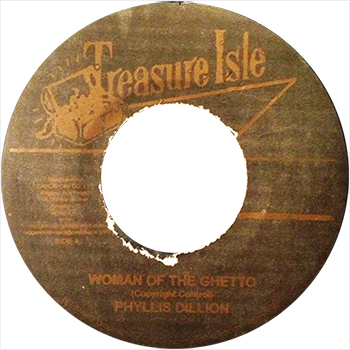 PHYLLIS DILLON – WOMAN OF THE GHETTO

Phyllis Dillon recorded for producer Duke Reid’s Treasure Isle label in the late 1960s and early 1970s. In 1972 she did a rendition of Marlena Shaw’s “Woman of the Ghetto”, which became an all-time classic soul-reggae murder. The next year Hortense Ellis also cut a version for producer Clive Chin. Which effort can be regarded as the best version is arbitrary. Marlena Shaw (born Marlina Burgess) is a really extraordinary American soul/jazz singer, who began her singing career in the 1960s and was never quite as well-known as she might have been, in part because she was hard to categorize. She released her first two albums on Chess’ subsidiary Cadet Records with the 1969 released sophomore album “The Spice Of Life” containing the previously released single “Woman Of The Ghetto”, with lyrics that are really complex and layered and profoundly provocative.