Jamaican artists have continued to cover or transform American r&b and soul tunes up to the present day. In a series of articles, of which this is the eighth one, we focus on noteworthy cover versions, mostly being the initial ones, recorded by well known and lesser known Jamaican singers and vocal groups. 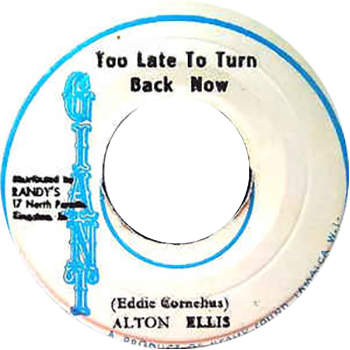 Alton Ellis – Too Late To Turn Back Now

Cornelius Bros & Sister Rose – Too Late To Turn Back Now

ALTON ELLIS – TOO LATE TO TURN BACK NOW

The great Alton Ellis did a fantastic reggae version of the soul classic “Too Late To Turn Back Now”, originally a song done by Cornelius Bros & Sister Rose. Written by Eddie Cornelius, “Too Late To Turn Back Now” was already released in 1970 on the Platinum label, before it was reissued as the 1972 follow-up single to their debut hit “Treat Her Like A Lady”. The song had great success as it peaked at number 2 in Billboard’s Hot 100 and is ranked as the 34th biggest US hit of 1972. Alton Ellis’ renditions of American soul and r&b hits were usually fairly true to the original and this version, which was produced by Clive Chin and came out on the Giant label in 1972, was no exception. Then, in 1982, he re-recorded the tune for the London-based Fashion label, which got released on 12″ vinyl. 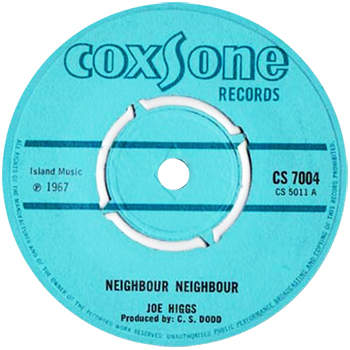 Joe Higgs, often called the ‘Godfather of Reggae’, was a popular artist in Jamaica for four decades. He’s also known for being an important mentor for younger artists including The Wailers and Jimmy Cliff. Released in 1967, “Neighbour Neighbour” by Joe Higgs is a pounding interpretation of Charles Berry’s “Neighbour Neighbour”. It was the American artist’s second single on the Jetstream label, but it’s actually best known to soul fans as Jimmy Hughes’ big hit from a couple of years later. The hoarse toned vocalist’s 1964 released original version of “Neighbour Neighbour” was written by writer/arranger Alton Valier. 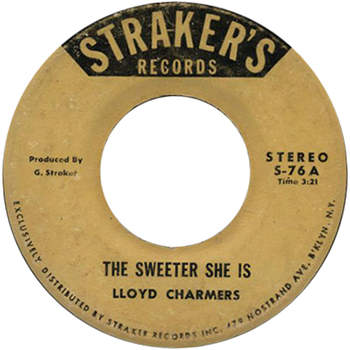 Dave Barker – The Sweeter She Is

Soul Sister – The Sweeter He Is

DAVE BARKER – THE SWEETER SHE IS

The singles that have been released with Dave Barker’s rendition of the Soul Sister’s “The Sweeter He Is” have caused confusion regarding the credits of this songs. On the Straker’s Records release from 1970, Lloyd Charmers is the one who gets mentioned as the singer, while the Trojan release states The Charmers (Lloyd ‘Charmers’ Terel & Roy ‘Teddy Charmers’ Willis) as the ones who’ve done the song. However, the song is featured on Dave Barker’s 1997 released compilation set “Monkey Spanner” and is credited to Dave Barker & The Charmers on “The Best Of Lloyd Charmers (50 Top Reggae Tunes)”. The Soul Children was an American vocal group who recorded for Stax Records in the late 1960s and early 1970s. The 1969 released single “The Sweeter He Is” was one of three top 10 hits they had on the US Billboard R&B chart. 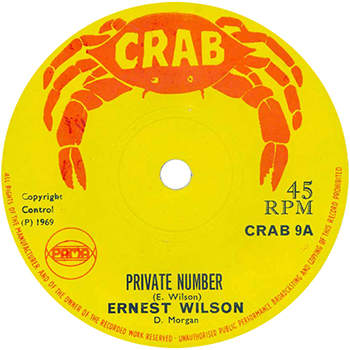 Produced by Joe Gibbs (although production has also been credited to Derrick Morgan), Ernest Wilson’s cover of the soul classic “Private Number” was released on labels like Soul Shot, Amalgamated Records and Pama Records’ Crab imprint in 1969. “Private Number”, originally a song recorded by American soul singers Judy Clay & William Bell in 1968, was released by Stax Records as a single in the US, where it peaked at number 17 on the R&B chart and number 75 on the Billboard Hot 100. Outside the US, “Private Number” went to number 8 in the UK. Ernest Wilson’s version was featured on compilation sets like “Crab Biggest Hits”, “Reggae Hits 69 Volume Two”, “Do The Reggae: Skinhead Reggae In The Spirit Of ’69” and “Joe Gibbs – Scorchers From The Early Years 1967-73”. In 1970, Bob & Marcia also did a cover of the song for producer Harry J. 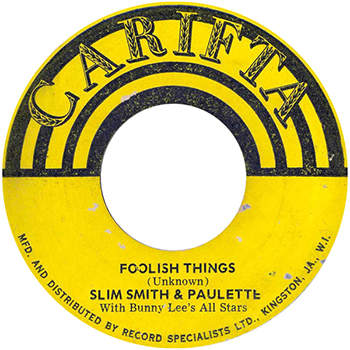 Martha Reeves & The Vandellas – Love (Makes Me Do Foolish Things)

Slim Smith & Paulette Walker recorded a big cover version of Martha Reeves & The Vandellas’ “Love (Makes Me Do Foolish Things)” for producer Bunny Lee, which was released in 1969. Paulette Walker also did a solo cut of the song, which even might be recorded previous to her duet with the great Slim Smith. “Love (Makes Me Do Foolish Things)” was the B-side to the Martha & The Vandellas’ 1965 single, “You’ve Been In Love Too Long”. Although the tune only peaked at number 70 on the Billboard Hot 100 singles chart and number 22 on the Billboard Hot R&B singles chart, it was number one on many American urban radio playlists. The song, written and produced by Holland-Dozier-Holland, has the narrator explain why love makes her do things she later regrets. It’s r rare ballad for the group, whose forte was reportedly uptempo soul dance numbers like “Dancing In The Street” and “Nowhere To Run”. 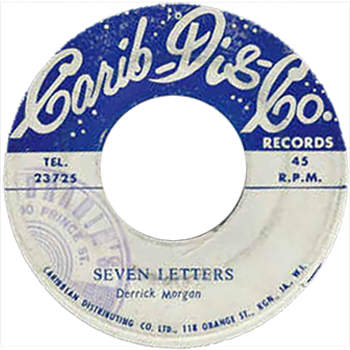 The personification of musical and sartorial cool, Derrick Morgan is, beyond any doubt, one of the most influential and important people to the development of Jamaica’s popular music. Without doubt his groundbreaking work built the foundation for reggae’s eventual breakthrough in the mid 1970s. In 1969 he did a fast reggae version of Ben E King’s self penned impassioned soul song “Seven Letters” from 1964, which featured the production work of Bunny Lee. Throughout the years, Derrick Morgan’s “Seven Letters” was (re)issued on a variety of labels including Carib Disco, Randy’s, Jackpot, Justice, and Crab. The single was also featured on the 1969 LP “Derrick Morgan In London” that drew from Bunny Lee, Lynford Anderson and Leslie Kong productions. 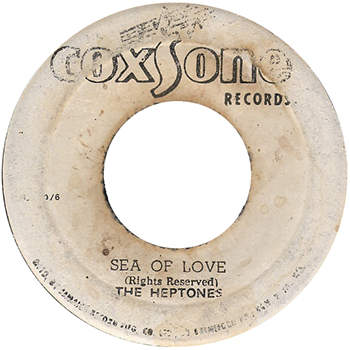 The Heptones – Sea Of Love

Phil Phillips and the Twilights – Sea Of Love

THE HEPTONES – SEA OF LOVE

Although some consider that Bob Marley wrote this song to express the overwhelming pressure of being an advocate for the poor who found success (cup running over), it’s actually a cover of James Brown’s “I Guess I’ll Have To Cry Cry Cry”, recorded with producer Lee ‘Scratch’ Perry. “My Cup” was released in 1970 as a 7″ single on the Upsetter label and featured on the album “Soul Rebel”. The original song, written and performed by James Brown, was released as a single in 1968 and charted number 15 in the R&B chart and number 55 in the Pop chart. This song is noted as the last single by James Brown to give label credit to his vocal group, The Famous Flames. 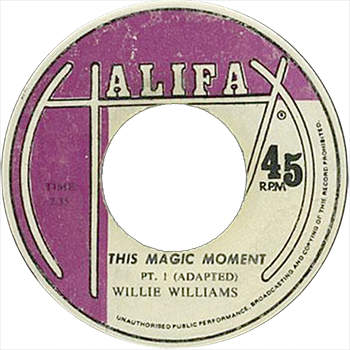 Ben E. King and the Drifters – This Magic Moment

Of course, Willie Williams is best known for one of his most successful tracks, the 1979 revelatory hit “Armagideon Time”. But besides recording original tunes he also did a few covers like The Temptations’ “Get Ready” and McFadden & Whitehead’s ‘Ain’t No Stoppin’ Us Now”. Released in Jamaica on the Halifax label in 1974, “This Magic Moment” was another one. That cover song was composed by lyricist Doc Pomus and pianist Mort Shuman, and is one of their best-known tunes. First recorded by Ben E. King and R&B vocal group The Drifters, the original version spent 11 weeks on the Billboard Hot 100 and reached number 16 on April 2, 1960. In 1968, Jay and the Americans released a version of the song, which became the song’s most widely successful release. Other Jamaican artists who did a cover version were Pat Kelly (recorded at Channel One) and Leroy Gibbon, whose 1980s Dancehall version for producer King Jammy was the most successful. 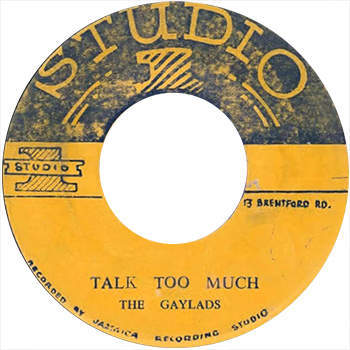 The Gaylads – Talk Too Much

Joe Jones – Talk Too Much

THE GAYLADS – TALK TOO MUCH

In 1964, The Gaylads – backed by The Skatalites – covered Joe Jones’ 1960 song “You Talk Too Much” for legendary producer Coxsone Dodd, who put it on the B- side of the group’s single “Chi Chi Bud”. When the song was reissued it was paired with The Gaylads’ “The Morning Sun” and credited to Winston & Bibby, a duo formed by Delano Stewart and B.B. Seaton. New Orleans R&B singer Joe Jones signed with New York City-based Roulette Records to cut “You Talk Too Much,” a song written by Fats Domino’s brother-in-law Reggie Hall and summarily rejected by Fats himself. Roulette shelved the disc, but Jones loved the song and re-recorded it in 1960 for the small New Orleans label Ric Records, complete with a new arrangement courtesy of Harold Battiste. 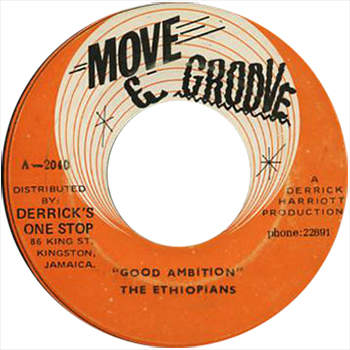 An adaptation of Roy C’s soul tune “High School Dropout” was done by The Ethiopians in 1970. The tune was recorded for producer Derrick Harriott, renamed “Good Ambition” and issued in Jamaica on the Move & Groove label. American southern soul singer, songwriter and record executive Roy Charles Hammond, better known as Roy C, is best known for his 1965 hit, “Shotgun Wedding”. Another song, “Impeach The President”, which he recorded and produced with a high school group named the Honey Drippers, has one of the most sampled drum tracks in hip hop music. “High School Dropout” was the B-side of “Dance Girl”, which was released by Black Hawk in 1965.