Jamaican artists have continued to cover or transform American r&b and soul tunes up to the present day. In a series of articles, of which this is the ninth one, we focus on noteworthy cover versions, mostly being the initial ones, recorded by well known and lesser known Jamaican singers and vocal groups. 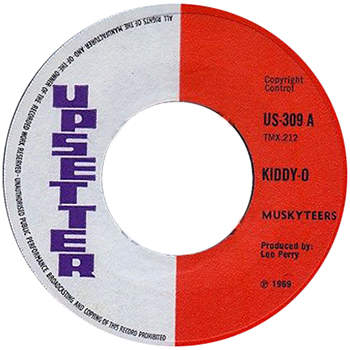 Teddy Randazzo with The Sounds – Kiddio

In the late 1960s The Silvertones worked with Lee ‘Scratch’ Perry, initially as The Muskyteers, contributing a version of Brook Benton’s “Kiddio” to Perry’s 1969 released album “The Upsetter”. Actually Brook Benton wrote the song together with Clyde Otis when he had not yet emerged as a recording star. The original was recorded by Teddy Randazzo with The Sounds and was issued on the Vik label in 1957. Three years later Brook Benton dusted off this three year-old composition and turned it into his most successful solo hit of 1960. The flip of The Muskyteer’s single featured a version of Brook Benton’s 1959 released song “Endlessly”. The Muskyteers then became The Silvertones again and saw their Lee ‘Scratch’ Perry produced debut album “Silver Bullets” released on the Black Art and Trojan Records labels in 1973. 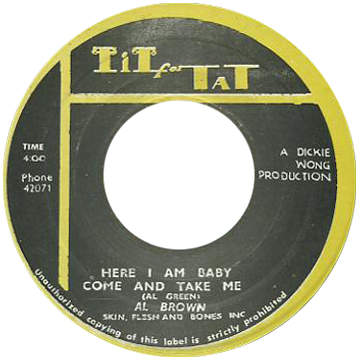 Al Brown – Here I Am Baby

AL BROWN – HERE I AM BABY

Backed by Skin, Flesh and Bones, former Paragons singer Al Brown recorded a killer funky reggae version of the Al Green soul tune “Here I Am (Come And Take Me)” for producer Dickie Wong, who released the tune on his Tit For Tat imprint in 1974. The same year it was put out in the UK by Trojan Records. “Here I Am (Come and Take Me)” was written by Al Green and Teenie Hodges, who also worked with Al Green on hits like “Take Me To The River” and “Love And Happiness”. The 1973 released “Here I Am (Come and Take Me)” has Al Green practically begging his girl to come back, letting her know that he’s hers for the taking despite all the times she broke his heart. Other artists to do a reggae version of this song include Marcia Griffiths and UB40. 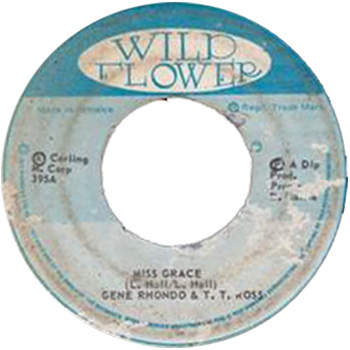 Jamaican reggae singer Winston Lara, who is better known by his stage name Gene Rondo was a fairly busy, but underrated artist both solo and as part of the pop-reggae band The Undivided (which later evolved into Undivided Roots). After first recording as part of the duo Gene & Roy in Jamaica, he relocated to London where he continued to record until the 1980s, including several album releases in the 1970s. T.T. Ross was a British lovers rock singer who began to record in the mid-1970s including singles recorded as duets with the aforementioned Gene Rondo. The duo’s cover of The Tymes’ soul classic “Ms Grace” from 1974 was produced by Dennis Harris and released in Jamaican on the Wild Flower label, a subsidiary of Federal Records launched in 1974. The Tymes are an American soul vocal group, who enjoyed equal success in the UK as their homeland. They share the distinction of being one of the few acts to have one and only one chart-topper in both the US and UK with different titles. “Ms Grace” became the group’s biggest UK hit, reaching number 1 in the UK Singles Chart in 1975.

John Holt ‎– A Love I Can Feel

The Temptations ‎– A Love I Can See

JOHN HOLT – A LOVE I CAN FEEL

John Holt’s early reggae stomper “A Love I Can Feel” is a (retitled) version of The Temptations’ 1963 released song “A Love I Can See”, produced by Coxsone Dodd. Arguably this Studio One version of “A Love I Can Feel” from 1970 is better than the one he did in 1983 for than leading Jamaican producer Henry ‘Junjo’ Lawes. The song was covered by several different reggae artists including Jackie Edwards, Creation Rebel, Dawn Penn, and Bitty McLean. “A Love I Can See”, a 1963 single by The Temptations for the Motown label, was the group’s first A-side to be written and produced by Miracles lead singer Smokey Robinson. Although the single did not chart nationally, the song was a smash regional hit in some parts of the US. 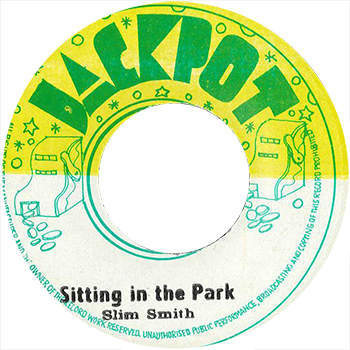 Slim Smith – Sitting In The Park

Billy Stewart – Sitting In The Park

SLIM SMITH – SITTING IN THE PARK

Slim Smith’s rendition of Billy Stewart’s “Sitting In The Park” possesses a hushed, exotically accented aura that elevates it even above the original. The Bunny Lee produced song was released in 1972 on an exceptionally wicked 2 sided 7″ single with on side A the soulful and militant “Stand up & Fight” and the doo wop inflected “Sitting In The Park” on the B-side. The 1965 released single “Sitting In The Park” was written and performed by Billy Stewart. The single was the US singer’s fourth and most successful entry on the soul chart in the US, peaking at number 4 on the soul chart and number 24 on the Billboard Hot 100. “Sitting In The Park” was also given interpretations by lots of other reggae artists including Owen Gray & Maximum Breed, Freddie McGregor, Winston Francis, Alton Ellis, Dr. Alimantado, Judah Eskender Tafari, Hortense Ellis, Ray I, Bunny Wailer, Junior Reid, Anthony Johnson, Barry Brown, Willie Williams, Junior Delahaye, Terry Smith, Brian & Tony Gold, Skatta, Cassandra, Klearview Harmonix, E.T. Webster and Thriller U. 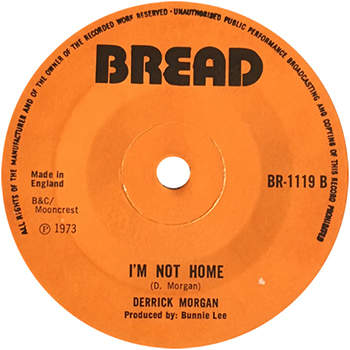 Ben E King & The Drifters – Tell Him I’m Not Home

It was for producer Bunny Lee that the great Derrick Morgan recorded a soulful reggae version of “Tell Him I’m Not Home” which was released on UK’s Bread Label in 1973 as the B-side of a single with Derrick Morgan’s cover of Ben E. King & The Drifters’ “I Who Have Nothing” on the A-side. “Tell Him I’m Not Home”, written by Tony Bruno, Brenda Bruno, and Sanford Bellini, was originally recorded by Chuck Jackson and released as a single on Wand Records in 1963. The single reached number 47 on the Billboard Hot 100 and number 12 on the Hot R&B Singles chart. The song is about a lover lamenting about a relationship that has lost its flame. Charles “Chuck” Jackson was a highly skilled singer, who’s just one of many under-appreciated black singers from the era. 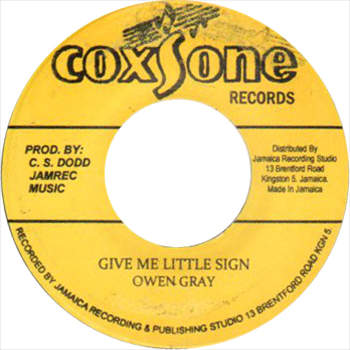 A masterpiece that is refined, and maximizes the talent of Jamaica’s first home grown star is Owen Gray’s amazing cover of Brenton Wood’s soul song “Gimme Little Sign”. Owen Gray, who was already living in the UK then, recorded his version in London while Clement ‘Coxsone’ Dodd and the Soul Vendors were on tour in the UK in 1967. The tune sounds very different from the ones recorded at the legendary studio at Brentford Road in Kingston, although it certainly has the Studio One sound. “Gimme Little Sign” is a classic soul music song, originally performed by Brenton Wood. It was released in 1967 on a Double Shot single and on the singer’s album “Oogum Boogum”. Brenton Wood’s single peaked at nummer 9 in the US Billboard Hot 100 chart, and also peaked at number 8 in the UK Singles Chart. Mighty Mo Rodgers played the Farfisa electronic organ on the recording. 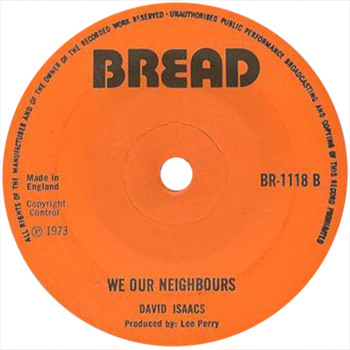 David Isaacs – We Are Neighbours

The Chi-Lites – We Are The Neighbors

DAVID ISAACS – WE ARE NEIGHBOURS

Lee ‘Scratch’ Perry must have loved the early 1970s soul music as he has done quite a number of reggae soul productions at the time. One of them is a very nice cover of the Chi-Lites song “We Are The Neighbors” by David Isaacs, who has recorded quite a few songs for the producer. “We Are Neighbours” came out in the UK on the Bread label in 1973 and is also known from the “Double Seven” LP. The Chi-Lites were a Chicago-based smooth soul vocal quartet from the early 1970s, one of the few from the period not to come from Memphis or Philadelphia. The group with then lead singer Eugene Record scored major hits in 1971 and 1972. However the single “We Are Neighbors”, included on their third album “(For God’s Sake) Give More Power to the People”, was released to moderate success. 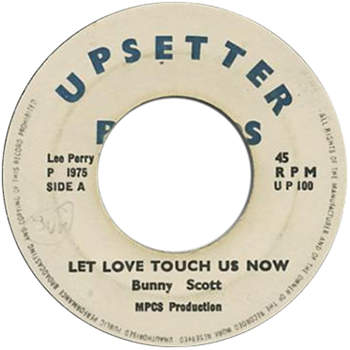 While working with Lee ‘Scratch’ Perry at the Black Ark Studio, Bunny Clarke aka Bunny Scott aka Bunny Rugs – backed by The Upsetters – recorded a few reggae renditions of songs such as the Bee Gees’ “To Love Somebody”, Bill Withers’ “Use Me”, Neil Diamond’s “I Am I Said” an “Sweet Caroline” and Doris Duke’s “Let Love Touch Us Now”. The latter was released in Jamaica on the Upsetter in 1975, followed by the UK release in 1982 on Black Ark International 12″ single, which was distributed by Starlight Music. Doris Willingham, renamed Doris Duke by former Atlantic Records producer Jerry ‘Swamp Dogg’ Williams Jr., was an American gospel and soul singer best known for her 1969 album “I’m A Loser”. Her second album, the 1971 released “A Legend In Her Own Time” on the Mankind label, which featured the track “Let Love Touch Us Now”, wasn’t commercially successful, but brought critical acclaim and ‘Soul diva’ status, particularly among UK fans. In 1976 she retired from the music business. 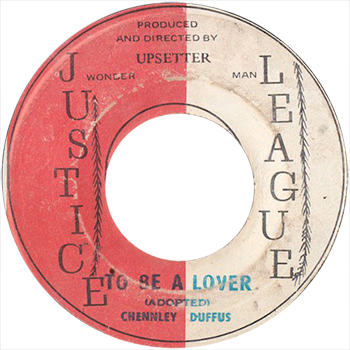 Chenley Duffus – To Be A Lover

William Bell – I Forgot To Be Your Lover

CHENLEY DUFFUS – TO BE A LOVER

Shenley Duffus aka Chenley Duffus (correct spelling being Chandley Duffus) recorded the song “To Be A Lover”, a reggae version of William Bell’s 1968 released single “I Forgot To Be Your Lover”, for Lee ‘Scratch’ Perry in 1971. The producer also made George Faith aka Earl George record an adaptation of that song, which then became a track of his 1977 released debut album “Super Eight” – in 1978 issued by Island Records/Black Swan under the title “To Be A Lover”. American soul singer and songwriter William Bell is probably best known for his debut single, 1961’s “You Don’t Miss Your Water”; 1967’s Top 20 single “Everybody Loves A Winner”; 1968’s top 10 hit in the UK “Private Number”, a duet with Judy Clay; and his only US top 40 hit, 1976’s “Tryin’ To Love Two”, which also hit number 1 on the R&B chart.