Jamaican artists have continued to cover or transform American r&b and soul tunes up to the present day. In a series of articles, of which this is the eleventh one, we focus on noteworthy cover versions, mostly being the initial ones, recorded by well known and lesser known Jamaican singers and vocal groups. 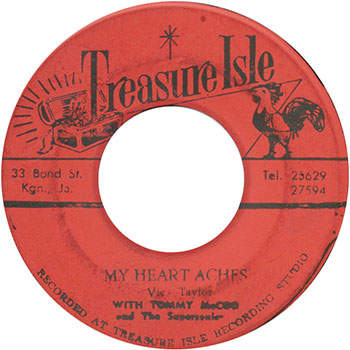 Vic Taylor, once a member of The Skatalites and then later on, in the 1970s and 1980s, the front man of Byron Lee & the Dragonaires, had some hits in Jamaica that included “For Your Precious Love” and “My Heartaches”. Actually there are three versions of the song, which is a rendition of Fred Hughes’ “My Heart Cries Oh”. The first version was a rocksteady cut that came out on Duke Reid’s Treasure Isle label in 1967. That same year also a different take of “Heartaches” with a slight organ in the background was released in the UK by Island Music. And then there’s the release from 1969, which mostly brought the lead guitar out in the mix. Originally released on the Vee-Jay label in 1965 on the flip side of Fred Hughes’ “You Can’t Take It Away”, the truly wonderful “My Heart Cries Oh” was penned and produced by Chicago’s highly-gifted Richard Parker. 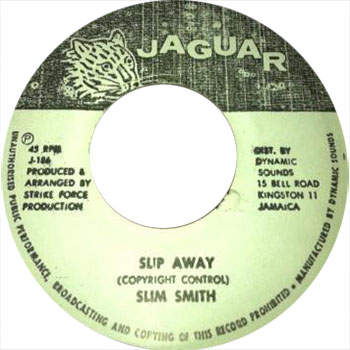 One of the greatest vocalists to emerge in the rocksteady era, Slim Smith, did a great version of Clarence Carter’s soul tune “Slip Away” over the excellent early reggae riddim that underpinned Dave Barker’s “Prisoner Of Love”, which producer Bunny ‘Striker’ Lee also used for other tunes such as Busty Brown’s “A Broken Heart” and I Roy’s “Slip Out”. Slim Smith’s version was released on single in 1969 and appeared on quite a few Slim Smith compilation albums. Clarence Carter’s original version of “Slip Away” was written by William Armstrong, Marcus Daniel, and Wilbur Terrell. It reached number 2 on the US R&B chart and number 6 on the US pop chart in 1968.

Lascelles Perkins – I’ll Do The Best I Can

Rubien Fort – I’ll Do The Best I Can

LASCELLES PERKINS – I’LL DO THE BEST I CAN

Lascelles Perkins recorded a cover version of “I’ll Do The Best I Can” for legendary producer Coxsone Dodd. The orginal “I’ll Do The Best I Can” is an R&B song by Rubien Fort released in 1962 on the Check-Mate label, which mistakenly has often been credited to soul/gospel singer James Phelps, the performer of the same song from 1965. Lascelles Perkins was one of the first stars of the Jamaican music scene, Studio One’s leading balladeer, and one of the most underrated singers from that time. He sang sentimental ballads and scored massive local hits for Coxsone Dodd’s Studio One label. Lascelles Perkins actually could sing any song, make it seem effortless, and, at the same time, address it in his own unique style. The singer’s “I’ll Do The Best I Can” was released on the Faze Four label in 1974. In 2013, the song was covered with style & fashion by Jamaican singer and Studio One veteran Carlton Livingston in collaboration with French producer Grant Phabao. 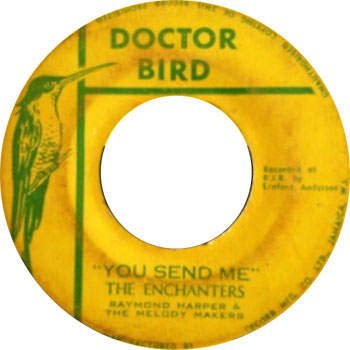 The Enchanters – You Send Me

Sam Cooke – You Send Me

THE ENCHANTERS – YOU SEND ME

In 1966, The Enchanters did a great version of Sam Cooke’s hit song “You Send Me”, with most likely Jackie Opel being the lead vocalist. Although he’s not credited on the original release, it sounds incredibly like him. On the Doctor Bird reissue from 2016, the label credits Jackie Opel as the singer, while Jamaican trumpeter Raymond Harper & The Enchanters are uncredited. A different, but also worthwhile version of “You Send Me” by Jackie Opel was released on the Island label (Canada) in 1969. “You Send Me” was one of pop/soul music’s earliest, smoothest, and most influential songs. Recorded in June 1957 and released as the B-side of “Summertime” in September of that year, Sam Cooke’s debut single as a solo artist spent six weeks at number 1 on the Billboard R&B chart. The song also had mainstream success, spending three weeks at number 1 on the Billboard pop chart. On December 11, 1964, at the age of 33, Sam Cooke was shot and killed by Bertha Franklin, the manager of the Hacienda Motel in Los Angeles. 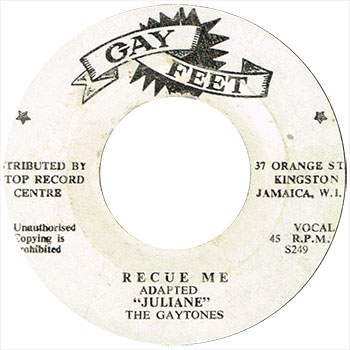 Jamaican record producer Mrs Sonia Pottinger was one of the island’s most noteworthy music producers during the ’60s and ’70s, responsible for the High Note, Gay Feet, and Sky Note record labels. During the early 1970s she produced some of Judy Mowatt’s earliest solo recordings, including a reggae version of the Fontella Bass song “Rescue Me”. It was released on the flip side of her 1971 released single “I Love You”. At the time Judy Mowatt used several different names such as Julian, Juliane or Julie-Ann for legal reasons. Two years prior to Judy Mowatt’s version, the Reggae Girls aka Ebony Sisters aka Soul Sisters also recorded a version of the song, which was produced by Harrold Deeland and released on Nu Beat Records. “Rescue Me”, the original R&B song, was first recorded and released as a single by Fontella Bass on the Chess label in 1965. It would prove the biggest hit of the female singer’s career, reaching number 1 on the R&B charts for 4 weeks and placing at number 4 on the Billboard Hot 100. 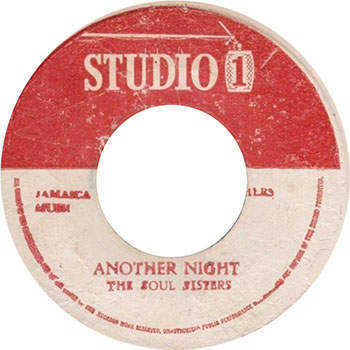 The Soul Sisters – Another Night

Carla Thomas – Another Night Without My Man

THE SOUL SISTERS – ANOTHER NIGHT

The Soul Sisters, comprised of Nora Dean, Cecile Campbell and Rita Marley, recorded a version of Carla Thomas’ “Another Night Without My Man” for Clement ‘Coxsone’ Dodd. Their song was released in 1970 as single on the Ironside label, one of the imprints the legendary producer used, but was also paired on 7″ singles with Alton Ellis’ “Sunday Coming” (Studio One) and Dennis Brown’s “No Man is An Island” (Banana). Carla Thomas, the daughter of Rufus Thomas who’s often referred to as the Queen of Memphis Soul, saw “Another Night Without My Man” released on the Stax label in 1966. The song, featured on the flip side of “Let Me Be Good To You”, is a soulful stunner that finds her bemoaning a lover who has yet to recognize her virtue. 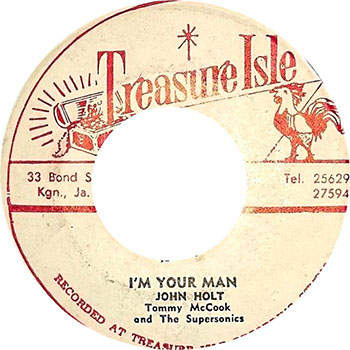 John Holt first found fame as a member of The Paragons, before establishing himself as a solo artist. By the early 1970s, he was one of the biggest stars of reggae. For Duke Reid he recorded a version of Brooks O’Dell’s “I’m Your Man”, which appeared on the B-side of the 1969 released Treasure Isle single “Ali Baba”. The original version of “I’m Your Man” was written by Thom Bell and Luther Dixon, and was released in 1964. Far from being a household name, Brooks O’Dell’s impassioned vocals on a series of singles recorded between 1963 and 1972 for various labels have made him sort of a cult figure among deep fans and collectors of classic R&B and Soul music. Brooks O’Dell practically defines the terms unsung and obscure, and little has been published concerning the details of his life, but he’ll forever be remembered for his powerful 1964 hit, “Watch Your Step”. 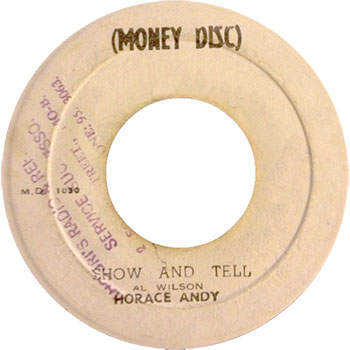 After unsuccessfully auditioning at Coxsone Dodd’s Studio One as a duo along with Frank Melody, Horace Hinds successfully auditioned on his own a few days later. Coxsone Dodd decided Hinds should record as Horace Andy, and “Got To Be Sure” became his first release for Studio One. The following two years saw the release of further singles such as “See A Man’s Face”, “Night Owl”, “Fever”, “Mr. Bassie”, and one of Andy’s most enduring songs, “Skylarking. He furthermore recorded a killer version of the song “Show And Tell” at Studio One, which was released on the Money Disc label. Also Freddie McKay came up with a reggae version of that song for producer Lloyd Campbell in 1981, followed by Ken Boothe’s interpretation for Sly & Robbie’s Taxi label in 1983. Although soul great Al Wilson’s soul nuggett topped the US charts in 1973 and sold nearly three million copies, it actually was American singer/songwriter Johnny Mathis who was the first artist to record this classic song in 1972. 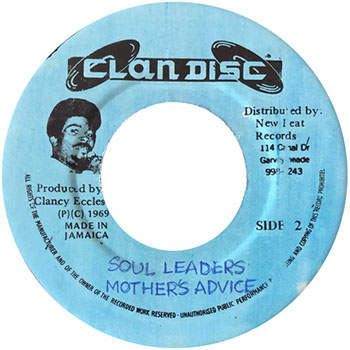 The Miracles – Shop Around

“Mother’s Advice” by The Soul Leaders aka The Inspirations is a thinly disguised reworking of The Miracles’ irresistable song “Shop Around”, which is a pioneering Tamla Motown record from 1960. It is notable as being the label’s first number 1 hit on the Billboard R&B chart, and it also hit number 2 on the Hot 100. Although on the Pama label credited to the Clancy Set it’s actually a group called The Soul Leaders that recorded the song for producer Clancy Eccles and came out in 1969. “Mother’s Advice” was released in Jamaica on the blue Clan Disc label with no printed credits on either sides. It was on the flip side of a 7″ single that featured “Dance Beat” by King Stitt & Clancy Eccles on the A-side. 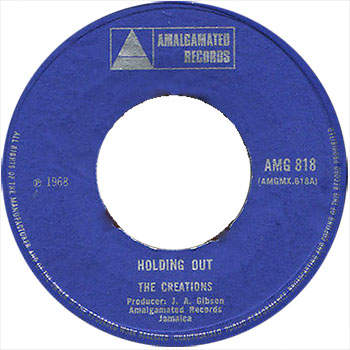 The Creations – Holding Out

THE CREATIONS – HOLDING OUT

The Creations, a Jamaican duo active in the late ’60s that consisted of Barry York and Ossie Henry, recorded a rocksteady version of Robert Parker’s R&B song “Holdin’ Out” for producer Joe Gibbs, who released it in the UK on the Amalgamated label in 1968. “Holding Out”, on the 7″ single backed with “Get On Up”, was then included on compilation sets like “Explosive Rock Steady” and “Get Ready, Do Rock Steady”. Robert Parker, an American r&b singer and musician best known for his 1966 hit “Barefootin'”, had the song “Holdin’ Out” featured on the B-side of his 1967 released single “Caught You In A Lie”. Actually Louisa Mark’s 1975 version of that song started the lovers rock genre in the UK.