Jamaican artists have continued to cover or transform American r&b and soul tunes up to the present day. In a series of articles, of which this is the tenth one, we focus on noteworthy cover versions, mostly being the initial ones, recorded by well known and lesser known Jamaican singers and vocal groups. 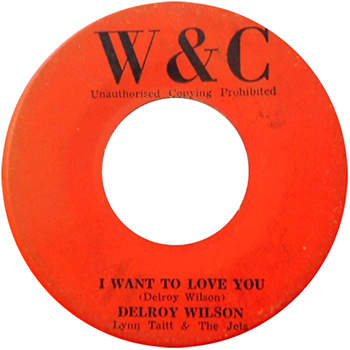 Delroy Wilson – I Want To Love You

Donnie Elbert – Will You Ever Be Mine

DELROY WILSON – I WANT TO LOVE YOU

“Will You Ever Be Mine” from Donnie Elbert, an r&b maverick with a distinct falsetto voice, was released in the US on Vee Jay Records in 1960 and in Jamaica on Top Rank International. It proved lastingly popular with Jamaican audiences. Backed by Lynn Taitt & The Jets, Delroy Wilson sang a rocksteady version of the song re-titled “I Want To Love You” in 1968 for the W&C label he owned with vocalist Stranger Cole. The record was backed by a cover of Mary Wells & Marvin Gaye’s “Once Upon A Time”, but “I Want To Love You” hit the spot – and kept on hitting it. Donnie Elbert was an American singer and songwriter, who had a prolific career from the mid-1950s to the late 1970s. He had a regional hit with “Will You Ever Be Mine”, which reportedly sold 250,000 copies in the Philadelphia area but failed to take off nationwide. The singer relocated to the UK in 1966, where his Bunny ‘Striker’ Lee produced song “Without You” was released in 1969. The song had a rocksteady riddim and went to the top of the Jamaican charts. 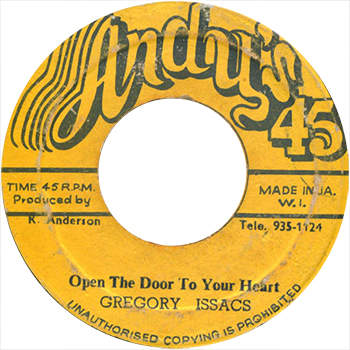 Gregory Isaacs – Open The Door To Your Heart

Darrell Banks – Open The Door To Your Heart

GREGORY ISAACS – OPEN THE DOOR TO YOUR HEART

Gregory Isaacs recorded a reggae version of Darrell Banks’ 1966 r&b and pop hit, “Open The Door To Your Heart”, for producer Roydale Anderson who put the record out on his Andy’s imprint in 1974. Darrell Banks’ absolute classic was released in the US by Revilot Records during the summer of 1966, where it made it to number 2 in the R&B charts but only got number 27 in the US charts in late September 1966. Actually the song became part of a copyright wrangle as Donny Elbert, who had originally written the song as “Baby Walk Right In” (still its alternative legal title) and had given it to Darrell Banks, received no writing credit on the original record. Eventually, the matter was resolved by BMI with a disgruntled Elbert awarded joint authorship with Banks. 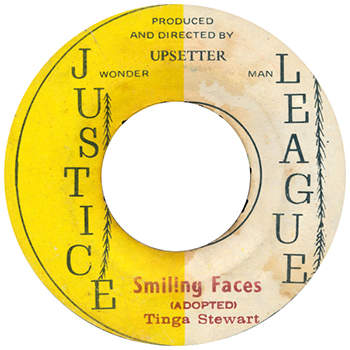 Tinga Stewart delivers warnings of people’s moral duality with a fine cover of the great US soul hit “Smiling Faces Sometimes”. Tinga Stewart’s version was produced by Lee ‘Scratch’ Perry and recorded at the legendary Black Ark studio. Tinga Stewart (brother of Roman Stewart) joined the Boris Gardner Happening Band as the lead vocalist in 1971, but went solo again in 1973. He was a Jamaica Festival song winner who had a strong following back-a-yard. “Smiling Faces Sometimes”, written by Norman Whitfield and Barrett Strong, was originally recorded by the Temptations in 1971. Producer Norman Whitfield had the song re-recorded by the Undisputed Truth the same year, resulting in a number 3 Billboard Hot 100 position for the group. Both versions deal with the same subject matter, “back-stabbing” friends who do their friends wrong behind their backs, but in different ways. The Temptations’ original, which runs over 12 minutes (most of which is extended instrumental passages without any vocals), uses an arrangement similar to a haunted house film score to represent feelings of fear and timidness. 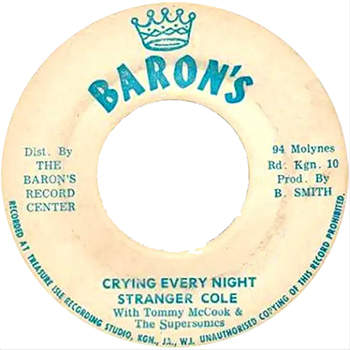 Junior Walker & the All-Stars – These Eyes

Stranger Cole’s deep, melancholy song “Crying Every Night”, a cover version of The Guess Who’s “These Eyes”, was recorded at Treasure Isle with the studio’s house band Tommy McCook & The Supersonics and produced by Byron Smith. The 1971, in Jamaica on the Baron’s label released single, featured the band’s lush instrumental titled “Mighty Alley” on the flip. Subsequently U-Roy and Hopeton Lewis sang and toasted new lyrics over “Mighty Alley” for their song titled “Tom Drunk”. Most likely it wasn’t the original version by the Canadian rock band that made Stranger Cole do a cover, but Junior Walker & the All-Stars’ version which reached number 3 on the R&B Singles Chart and number 16 on the Billboard Pop Singles in October 1969. Before the release of Stranger Cole’s single, Alton Ellis already did a cover of “These Eyes” for his 1970 Studio One album “Sunday Coming”. 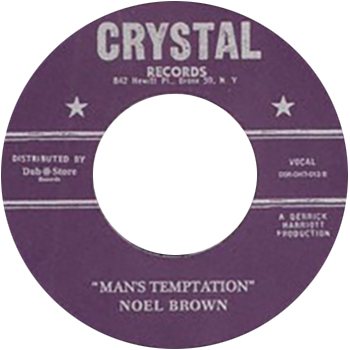 As a solo artist and as a member of groups like The Wildcats, The Mighty Mystics, and The Chosen Few, Noel ‘Bunny’ Brown was known for also recording reggae versions of US soul and r&b tunes. In 1969, the man with the velvet voice recorded Gene Chandler’s “Man’s Temptation”, a song written by Curtis Mayfield, for producer Derrick Harriott with whom he quickly established a strong working relationship. Gene Chandler (born Eugene Drake Dixon) is an American singer, songwriter, music producer and record label executive. Nicknamed ‘The Duke of Earl’ or simply ‘The Duke’, Gene Chandler is best known for his most successful songs “Duke Of Earl” and “Groovy Situation” and his association with The Dukays, the Impressions and Curtis Mayfield. 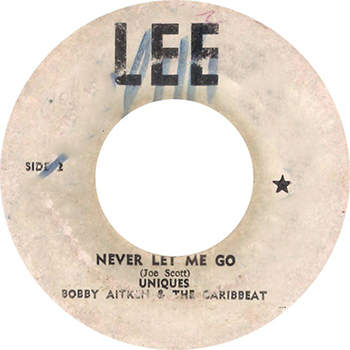 The Uniques – Never Let Me Go

The Impressions – Never Let Me Go

THE UNIQUES – NEVER LET ME GO

The Uniques, fronted by lead singer Slim Smith, recorded a rocksteady cover of The Impressions’ doo wop classic “Never Let Me Go” for then upcoming young producer Bunny Lee. Released in the UK on Island Records in 1967 and on the Lee’s label in 1968, The Uniques were backed by Bobby Aitken & The Carib Beats. Although most likely the 1962 released “Never Let Me Go” is widely regarded to be an original Impressions song, it actually is also a cover version. Originally it’s a blues ballad song by American r&b/blues singer Johnny Ace, which was written by Joseph Scott and released in 1954 on a 78rpm 10″ single by Duke Records. 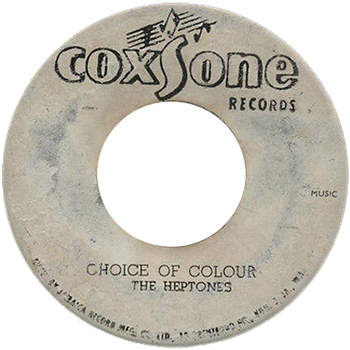 The Heptones – Choice Of Colour

The Impressions – Choice Of Colours

THE HEPTONES – CHOICE OF COLOUR

“Choice Of Colour” is an early reggae stomper by The Heptones, who time and time again have shown that they knew how to do justice to songs, even when they did a cover version as in this case of The Impressions’ masterpiece from 1969. The Heptones’ magnificent version of “Choice Of Colour” was recorded at Studio One and issued as 7″ single in Jamaica on the Coxsone label in 1970. More reggae versions of the song came from artists such as Ernest Wilson, Devon Russell, Cornell Campbell, and The Meditations. The Impressions’ “Choice Of Colours” is a thought-provoking song about civil rights and although it takes a very bold stance, its lyrics are a calm approach to race boundaries. It fits right in with the black equality movement of the times. It’s actually the second of three Impressions singles that reached the number 1 spot on Billboard’s R&B chart. 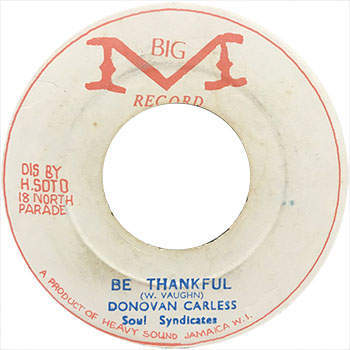 William DeVaughn – Be Thankful For What You Got

In 1974, Donovan Carless recorded an utterly gorgeous version of soul singer William DeVaughn’s million-selling hit “Be Thankful For What You Got”. Produced by Clive Chin, with backing band being the Soul Syndicate, Donovan Carless’ wicked soulful roots version was released in Jamaica on the Big M Record label and in the US on the Giant label. In 1975 it was followed by a version done by Bunny Clarke aka Bunny Scott aka Bunny Rugs for producer Lee ‘Scratch’ Perry. Originally recorded in 1972 as “A Cadillac Don’t Come Easy” but retitled for its 1974 single release, the song, with its Curtis Mayfield-inspired sound and positive lyrical message, became a huge crossover hit for DeVaughn. It charted at number 1 on the US R&B chart and number 4 on the Billboard Hot 100. It was ultimately a one-hit wonder for DeVaughn, who only recorded one album before losing interest in music and returning to his prior job as a draftsman. The song is often mistakenly attributed to Curtis Mayfield, owing to his vocal similarities with William DeVaughn, but he never recorded the song. 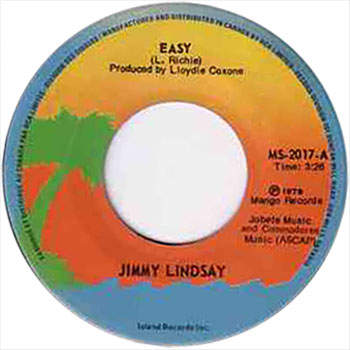 After beginning as a soul artist in the ’60s, the singer Jimmy Lindsay, hailing from Manchester UK, came to fame as the front man of Cymande in the ’70s. By 1976 he embarked on a solo career and began concentrating on reggae and soon found himself at the forefront of British reggae aligning himself with reggae greats as Joe Gibbs, Jimmy Cliff, Bob Andy and Bob Marley. It was Lloyd Coxsone who produced Jimmy Lindsay’s superlative re-working of the Commodores’ hit “Easy”, for his own Tribesman label. However the song was picked up for release by Island Records, had chart success and became the 1977 British Reggae Award winning single. Written by Commodores lead singer Lionel Richie, the song is a slow ballad expressing a man’s feelings as a relationship ends. Released on the Motown label in March 1977, “Easy” reached number 1 on the Billboard Hot Soul Singles chart and number 4 on the Billboard Hot 100. 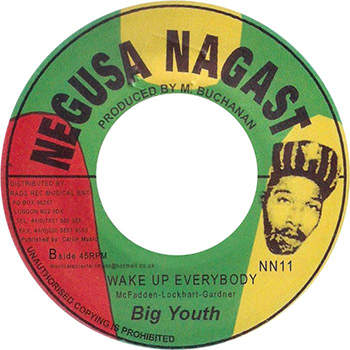 Big Youth – Wake Up Everybody

Harold Melvin & The Blue Notes – Wake Up Everybody

BIG YOUTH – WAKE UP EVERYBODY

The inimitable Manley Augustus Buchanan beter known as Big Youth (sometimes called Jah Youth) wails the heck out of “Wake Up Everybody”, a rendition of the song originally done by Harold Melvin & The Blue Notes. Having recorded only as a deejay initially, Big Youth was developing more confidence as a singer in the mid 1970s. While his vocal range was never the greatest, his singing sides continued to improve in musical quality, and began to become as common as his deejay tunes. “Wake Up Everybody” is a song with a positive message, in the face of troubled times, with the message being that if teachers and doctors change the way they tell people things, then maybe the young people, the next generation, will listen and respond positively. It was featured on the flip of a single that featured Big Youth’s interpretation of Marvin Gaye’s “What’s Going On” on the A-side, and was also included on the 1976 released album “Hit The Road Jack”. The original 1975 song by Harold Harold Melvin & The Blue Notes was one of the last tunes that included Teddy Pendergrass aka Black Elvis before he left the group for a solo career. Reggae artists like O.C. Roberts, Ras Midas, Bob Andy, Tony Anthony, and Prilly Hamilton also recorded versions of this Philly soul tune.