REGGAE GOT SOUL | THE ORIGINALS PART THIRTEEN – A SPECIAL

1960s US vocal group The Impressions not only had a huge impact in their homeland, but also in other countries, most notably Jamaica. There they had more of their songs covered than any of their contemporaries – The Temptations, The Four Tops, Little Anthony & the Imperials, etc. It actually was Curtis Mayfield who was the cornerstone, builder and architect behind the success of The Impressions, a group that was one of the first to speak openly about African-American pride and community struggle in its music. 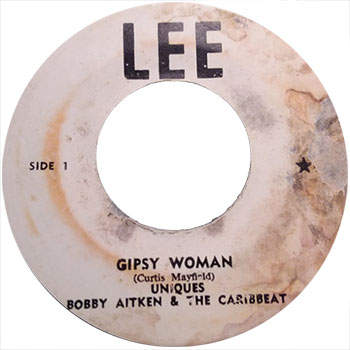 
The Uniques was a Jamaican vocal group formed by Slim Smith with Roy Shirley and Franklyn White. When the latter two left the group, they were replaced by Jimmy Riley and Lloyd Tyrell aka Lloyd Charmers and commenced an association with producer Bunny Lee for whom they recorded a string of singles, including the 1967 rocksteady version of The Impressions’ “Gypsy Woman”. The group was disbanded after Slim Smith went solo in 1969. “Gypsy Woman” was written by Curtis Mayfield and recorded by his group the Impressions in 1961. The exotic tune displayed Mayfield’s knack for storytelling. It was the group’s first single following the departure of lead singer Jerry Butler. The single reached number 2 on the R&B chart, number 20 on the Billboard Hot 100 and number 17 on the Cash Box chart. “Gypsy Woman” was one of the anchors on the group’s 1963 eponymous debut album “The Impressions”, which included no less than six chart hit singles. 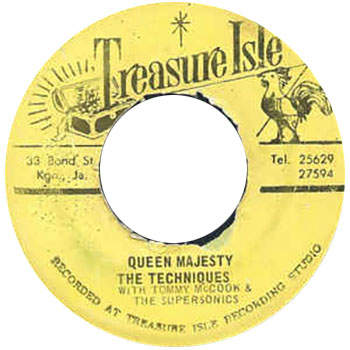 Jamaican vocal group The Techniques was formed by Winston Riley in 1962 while still at school, with the initial line-up also featuring Slim Smith, Franklyn White, and Frederick Waite. Their Jamaican debut came in 1965 when they were introduced to producer Duke Reid by singer Stranger Cole. Singles such as “Don’t Leave Me”, “When You Are Wrong”, and “Little Did You Know” appeared on labels such as Island Records, and Duke Reid’s own Duke and Treasure Isle labels. Slim Smith left the group in 1966 to pursue a solo career at Studio One, and later forming The Uniques. Slim Smith was replaced by Pat Kelly. The shift from ska to rocksteady suited The Techniques, with a string of hits in 1967 and 1968 following, including a version of The Impressions’ “Minstrel And Queen”, which was titled “Queen Majesty”. The Impressions originally released the heartfelt “Minstrel And Queen” on single in 1962, but amazingly this gorgeous song never charted in the US. 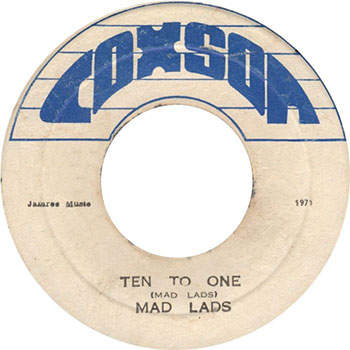 THE MAD LADS – TEN TO ONE

The Mad Lads were a short-lived duo formed by George Allison and Delroy Williams. Their cover of The Impressions’ “Ten To One”, one of only three songs recorded by The Mad Lads (the other two being “You Will Never Know” and “Losing You) for Studio One, was originally issued on a Coxson 7” single in 1971. The original version of “Ten To One” appeared on The Impressions’ 1964 album “The Never Ending Impressions” and was released on 7″ vinyl b/w “Minstrel And Queen” by the reissue label Stardust Records, a subsidiary of Canada based Underground Records, known for quasi-legitimate reissue singles (mastered from existing vinyl records). 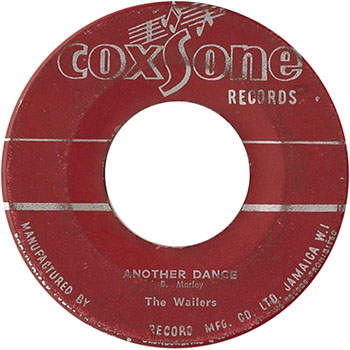 THE WAILERS – ANOTHER DANCE

The Impressions were a notable influence on Bob Marley and The Wailers, who modelled their singing/harmony style on them and in part borrowed their look, too. “Another Dance”, a ska version of “Just Another Dance” by The Impressions is a single from Bob Marley’s early days with The Wailers, when he and core members Peter Tosh and Bunny Livingston aka Bunny Wailer alongside Junior Braithwaite recorded for Coxsone Dodd at Studio One. “Another Dance”, featuring a fine tenor sax break by Roland Alphonso, was one of the rarities that appeared on the album “Another Dance: Rarities From Studio One”, a compilation of early Wailers tracks released by Heartbeat Records in 2007. The Impressions’ original tune “Just Another Dance” is from their “People Get Ready” LP, released in 1965. 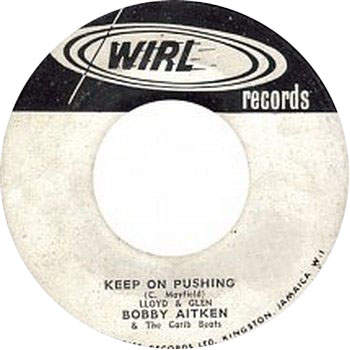 Lloyd & Glen, being Lloyd Robinson and Glen Brown, covered The Impressions’ 1964 hit song “Keep On Pushing”. This Bobby Aitken production came out in Jamaica on the WIRL label in 1965 and was two years later released in the UK on Doctor Bird. The classic soul tune “Keep On Pushing” comes from the time The Impressions’ music frequently utitlized a gospel feel, while serving as Mayfield’s political outlet. With this song, Curtis Mayfield addressed the struggle of minorities (‘…I’ve got my pride…and I’ll push the wall aside’). The single became the group’s sixth Top 40 single, and a Top 10 Pop smash, peaking at number 20. It went to number 1 for two weeks on the Cash Box R&B chart. “Keep On Pushing” was one of the songs sung in the Civil Rights Movement in the US during the turbulent 1960s. 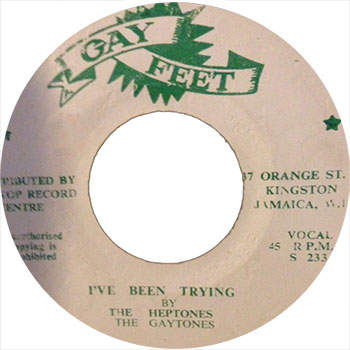 THE HEPTONES – I’VE BEEN TRYING

One of the most most successful Jamaican vocal harmony trios throughout the late 1960s and early 1970s, The Heptones, recorded a cover of The Impressions’ soul ballad “I’ve Been Trying” for Mrs Sonia Pottinger, who released the song on her Gay Feet imprint in 1972. The song “I’ve Been Trying” is a gentle ballad of romantic longing written by Curtis Mayfield and featured on The Impressions’ third album, the 1964 released “Keep On Pushing”, the best-selling album of their career. The lead vocals on this beautiful song are shared by all three members of the group: Curtis Mayfield, Fred Cash, and Sam Gooden. 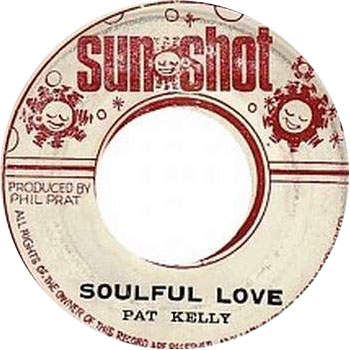 Phill Pratt produced Pat Kelly’s delightful reggae-flavored version of “Soulful Love” by The Impressions and released the song on his Sunshot label in 1971. Pat Kelly’s falsetto is captivating and the Jamaican singer clones Curtis Mayfield’s voice better than anyone. The rocksteady and reggae singer, whose career began in the mid-1960s as a member of The Techniques, had big hits for producer Phil Pratt with “Soulful Love” and “Talk About Love”. The original version of The Impressions’ “Soulful Love” is three-part harmony at its very best. The song was paired with “(Baby) Turn On To Me” on 7″ single and released on Curtis Mayfield’s own Curtom Records in 1970. 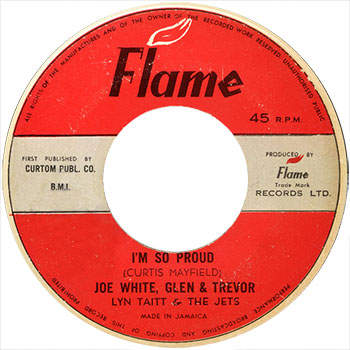 Jamaican vocalist, piano and melodica player, Joe White, covered The Impressions’ “I’m So Proud” for little known producer Charles Ross. Well known as a singer, Joe White recorded hits at Studio One like “My Guiding Star” plus a good portion of tunes for Rupie Edwards, Duke Reid and Sonia Pottinger. With Trevor Shields (of The Beltones) and Glen Brown as backing vocalists and backed by Lyn Taitt & The Jets, he did a superb rocksteady version of the song which came out in Jamaica on the Flame label in 1968. The Impressions’ “I’m So Proud” became a Top 20 hit in the spring of 1964, following up their million-selling gold single “It’s All Right”, which the year before had reached number 1 in the R&B charts and had made it to number 4 on the pop charts. 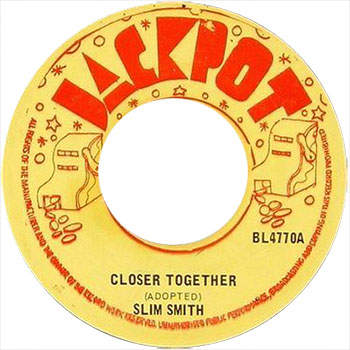 After having recorded for Bunny Lee with The Uniques, Keith Smith aka Slim Smith stayed with the successful producer to concentrate on a solo career, hitting almost immediately with “Everybody Needs Love”. Further hits quickly followed including a version of The Impressions’ song “Grow Closer Together”, which he recorded in 1972, the year personal problems led to him being detained at Bellevue sanatorium. “Grow Closer Together” is a 1962 released single of The Impressions, which, just like other early tracks of the group, is characterized by Doo-wop flavored vocals and blaring brass arrangements. 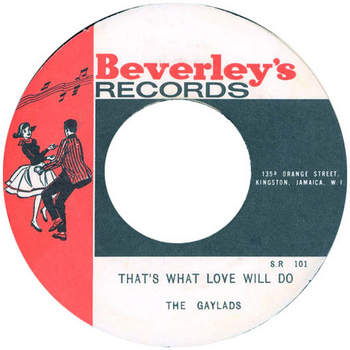 THE GAYLADS – THAT’S WHAT LOVE WILL DO

The Gaylads were one of the top vocal groups active in Jamaica between 1963 and 1973. The group, formed in Kingston, originally consisted of singers Harris “B.B.” Seaton, Winston Delano Stewart and Maurice Roberts. B,B. Seaton and Delano Stewart had previously been successful as the duo Winston & Bibby. There were several line-up changes throughout The Gaylads’ ten-year history, with Maurice Roberts remaining the only constant member. The group’s version of The Impressions’ “That’s What Love Will Do” was produced by Leslie Kong and released on Beverley’s Records in 1969. The original song was featured on the 1964 released LP “The Never Ending Impressions”.