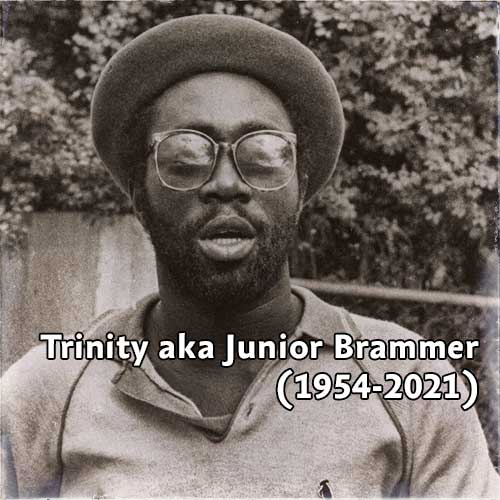 After the recent death of U Roy and Bunny Wailer, the reggae fraternity has lost another icon. Deejay Trinity aka singer Junior Brammer was at the hospital for two weeks fighting with sickness and his diabetes. Sadly he lost the battle.

By the middle of the 1970s the deejay boom, initiated and developed by U Roy at the end of the 1960s, was proving to be much more than just the passing phase that many had predicted. In 1971, Big Youth had come on the scene and over the next few years had created a new style of toasting/deejaying. By the mid-’70s he was a star; his fame easily matching that of singing stars like Bob Marley, Dennis Brown, and Johnny Clarke. Thus Big Youth became the role model for a new generation of deejays, among them a youth called Wade Brammer. The latter would first take the professional name of Prince Glen before he much more successful named himself Trinity when he eventually followed Big Youth into the deejay business.

It was for a friend of his (initially reluctant) mother, producer Enos McLeod, that he made his debut with the single Got To Believe In It. This was followed by Mop Head Screw Face with his friend, the deejay Dillinger, for producer Winston Edwards. On several occasions, Trinity credited Dillinger as the one who led him into the music business and away from the rudeboy life. These early sides from 1974, were recorded under the name of Prince Glen. In 1975, the two deejays collaborated on Bump Skank, a version of the Won’t You Come Home/In A Dis Ya Time riddim for Lloyd ‘Spiderman’ Campbell. 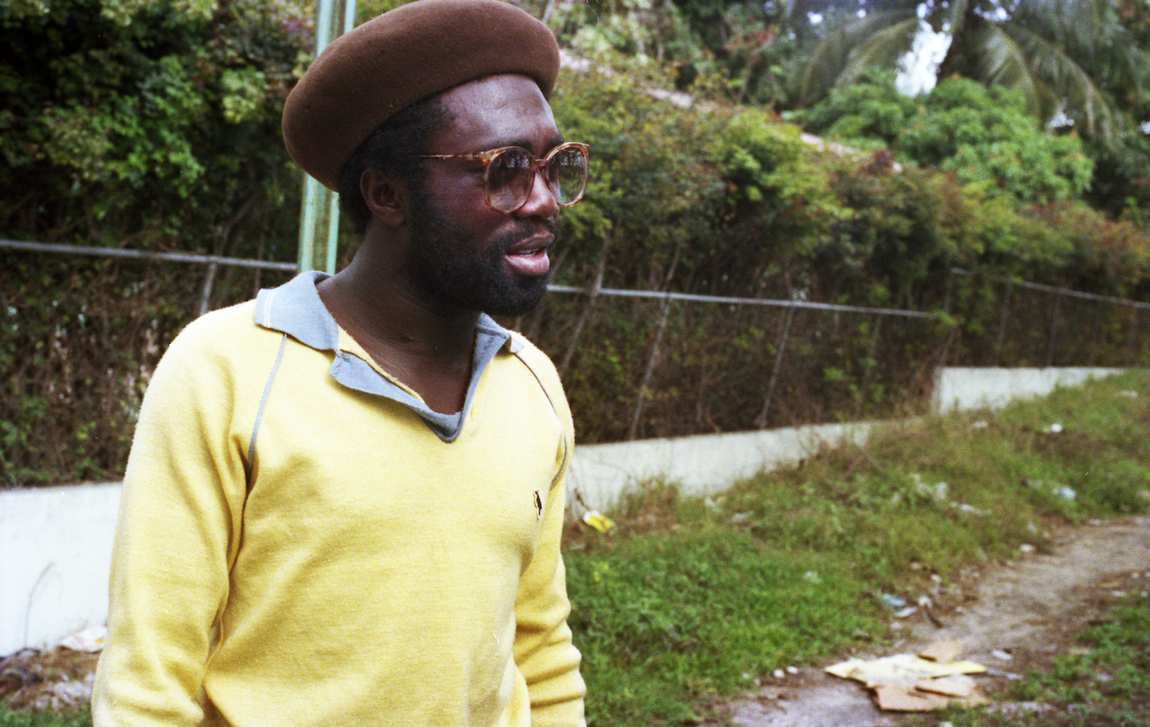 After these efforts, the two deejays made their way to Channel One Studio, owned by the Hoo Kim brothers and named after their sound system on which Dillinger had regularly deejayed. There, during 1975-76, things were beginning to run for the pair. Producer Jo Jo Hoo Kim didn’t like the name Prince Glen, claiming it sounded too petty. He renamed him Trinity, and that was the name that appeared on a series of tunes he recorded in early 1976. These recordings showed that Trinity was fully capable of taking the basic Big Youth style and representing it on the most up-to-date dancehall riddims. Tunes. like River To The Bank and No Make Up In Zion, he recorded around the same time for Yabby You showed he could add something to deeper roots riddims. This ability didn’t go unnoticed by other producers and it was with the more dancehall-oriented productions of Joe Gibbs that he would really make his name. Around the same time, Trinity also voiced the Shanty Town Determination album for Yabby You. Apparently, the set was to be brokered to Virgin by ‘Prince’ Tony Robinson, who was then dealing with the UK label on his Big Youth and U Roy sets.

However, by the end of 1976, nothing much had happened so Trinity and his friend Dillinger still had to depend on their hustling ability. They went to Joe Gibbs Record Shop at North Parade looking to record. It eventually led to Trinity voicing Three Piece Suit over Marcia Aitken’s I’m Still In Love With You. The single came out shortly after the tune was recorded, reputedly selling 10,000 copies in its first week of release, with many of these being export sales to the UK and US. Trinity followed this up with John Saw Them Coming over a relick of the Wailers’ Hypocrites riddim and Starsky & Hutch on a new version of Studio One’s Death In The Arena. Trinity became the hottest deejay on the island and signed a contract with Joe Gibbs to do an album. It was released in 1977 as Three Piece Suit, containing all the hits he had recorded for the producer. Only Trinity’s youthful naivete prevented him from taking advantage of his ability to originate highly commercial melodies and hooks, inspired by then current ghetto ‘style and fashion. Trinity’s own style became a blueprint for many dancehall deejays well into the 1980s, including such as Ranking Toyan, Lui Lepki, and Johnny Ringo. In the late 1979s, he recorded hundreds of tunes for many producers and also started his own label Flag Man. He not only recorded himself and Dillinger, but also youth singers like Dave Robinson, Michael Black, and Barrington Levy, whom he carried to a stage show at Scout Headquarters in 1978 because he instantly recognised the young singer’s talent.

Sometime around 1987, Trinity astonished reggae connoisseurs and fans alike by bringing out two vocal albums, Telephone Line and Hold Your Corner, under the pseudonym Junior Brammer. It actually was after he and Willie Lindo had come together one day and Lindo heard him singing that they tried it out to record him as a singer. It sounded good and Willie told him that he had to change his name because he was known as a deejay and thus he came up with the name Junior Brammer for the singing part.