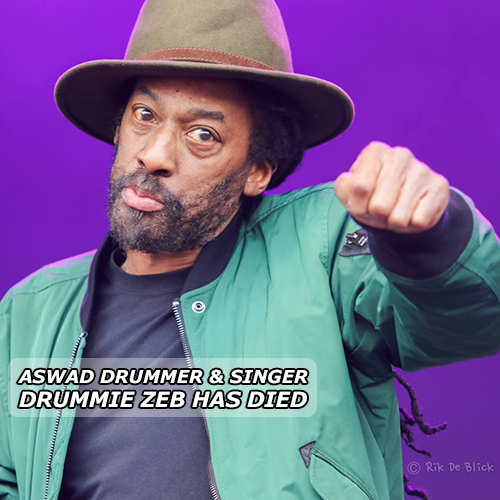 Drummer and lead singer for British reggae band Aswad, Angus Gaye pka Drummie Zeb, died in London on Friday at the age of 62.

The iconic British reggae band released a statement on Facebook in which they confirmed the death of their frontman.

“It is with deepest regret and profound loss that we have to announce the passing of our brother Angus ‘Drummie’ Gaye. Drummie was the lead vocalist for the iconic band Aswad and is much loved and respected by both family, friends and peers alike. More information will be given at a later time but on behalf of his family and Aswad — we ask that their privacy is respected at this heart-breaking time. Drummie has left us to join our ancestors and leaves a huge void both personally and professionally.”

Initially, the band produced music in the roots reggae vein, with members contributing songs individually and with Brinsley Forde acting as the band’s principal songwriter. The band’s dynamic soon began to change however. Shortly after the release of their self-titled debut album in 1976, Hemmings left and was replaced by Tony “Gad” Robinson (the only time in the band’s history where a departing member would be officially replaced by an incoming musician).

The band then released their second studio effort called “Hulet”, in 1978, before Oban departed the band in 1979, with Robinson taking over the position of bassist as well as continuing his role as keyboardist. The following year saw Griffiths depart, leaving Forde as the band’s sole guitarist. During this early period in the band’s history they were distinctly different from Jamaican reggae acts in that they wrote songs that dealt with the issues surrounding the experiences of black youths growing up in the UK; such as “Three Babylon”, “It’s Not Our Wish”, and the powerful instrumental “Warrior Charge”.

Once the band’s line-up had stabilised into the trio of Forde, Gaye, and Robinson, Aswad followed a more commercial reggae style, gaining a wider audience with the 1981 “New Chapter” album. They then followed this with the Michael Reuben Campbell produced “A New Chapter of Dub” LP, which was a dub of the entire New Chapter album. In August 1982, Aswad played live at Meanwhile Gardens on the Sunday of the Notting Hill Carnival. The resulting live album titled “Live And Direct” with Drummie Zeb’s passionate performance being outstanding. It won him widespread acclaim.

When the band’s sound started to become more commercial, Drummie Zeb assumed most of the lead vocal duties on songs like the band’s 1988 UK No. 1 hit, “Don’t Turn Around” (originally recorded by Tina Turner) as well as “Give A Little Love” and and a reggae-flavoured rendition of The Eagles’ “Best of My Love”.

Aswad underwent their first line-up change in sixteen years in 1996, when Brinsley Forde departed the band for spiritual reasons, leaving Drummie Zeb as the only founding member. Once again, they opted not to seek to recruit a replacement musician, and thus Aswad became a duo of Angus Gaye and Tony Robinson. the band’s line-up remained the same until Drummie Zeb’s untimely death.