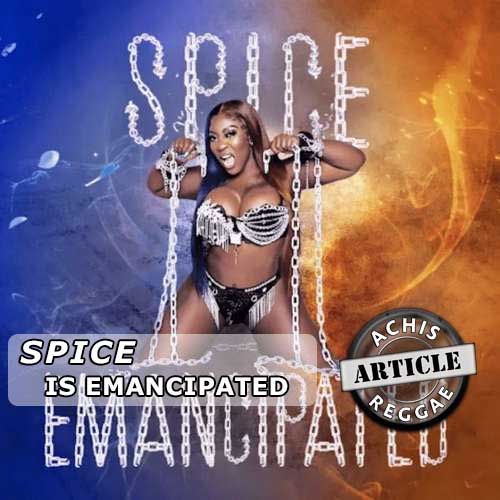 Okay so, unless I’m REALLY forgetting someone, in 2021 the reigning Queen of Dancehall, Spice, delivered her first full length album, 10 (well, that part is clearly true), which would go on to be the finest Dancehall album of the year. If you recall the story behind that project you know it was the offspring of a somewhat tumultuous relationship the DJ and her label, VP Records, with the album having been delayed countless times over…. about two or three hundred years or so. Well, despite the fact that 10 took so long to arrive, Spice readied its followup in about a year and, in ‘honour’ of her newly free status, she now gives us Emancipated.

The release comes via Stealth Music Group and Spice’s own Spice Official ENT label and, though it may lack the fanfare of its predecessor (…then again, it may not actually), Emancipated shares one glaring feature with the Grammy nominated 10 that stands out for me: Emancipated does carry some actual Dancehall music. Also, with titles such as Tape Measure (which is precisely what you think it is about), Big Big (so is that one) and Crop Top, you know the two share a lyrical direction. Emancipated is only nine tracks long and clocks in at less than twenty-five minutes, so I can’t do it as my typically long-winded feature, but I thought we’d take a quick look at some of the highlights on a release that has already done some considerable damage and is just A LOT of fun (…this is basically going to be me writing a regular review. Yes, I will feel disgusting doing it, but we’ll survive) (and even if we don’t survive – well, we were always going to die eventually anyway).

If you are at all familiar with Spice (or if you read our opening paragraph), you know that much of her music centers around sex and sexual… stuff and, in that regards, the work that comprises Emancipated is not at all a deviation from what you are used to hearing from the artist. With that being said, however, in her case as in the case of just a handful of others (Shenseea being one of them), I always try to stress the point that if you just view them as people who make dirty songs and just that, the mistake will be yours. Spice is INCREDIBLY talented with the spoken word. Regardless of her topic of discussion, when you REALLY tune her in, she is capable of being amazing lyrically.

So, as a ‘warm-up’, we won’t hold against you too much if you’re dismissive of the opener, Clap Clap
[“Bad, look how mi bad. Tell mi who bad like a dis. Mi a di baddest inna dis, watch how mi waistline ah twist. A so mi bend inna S like mi’s a contortionist”]
as just a party type of song. That is exactly what it is. It’s catchy as hell, even if you don’t like it, ultimately (and maybe even if it disgusts you a little) (prude), you’ll go on to the next tune singing the hook with a virtual certainty. The same can be said for other tunes such as the aforementioned somewhat Hip-Hoppish Crop Top (decent, but not quite as good as Clap Clap in my opinion; and at barely over two minutes long, it never really gives itself a chance to get going). The DENSE Pop Off is another which is sure to stick in the heads of listeners long after its time. Produced by Shaggy and Costi (who were also behind the giant hit that was Go Down Deh), though Pop Off ay have a slight spell of brevity-itis (and I can probably stop saying that because most of these tunes do), I fully expect this one to do a major amount of damage at some point. It has a very heavy vibes to it which’re kind of electric and, seemingly, have “HIT” written all over them.
Tape Measure is already in the process of creating a stir of a largely controversial nature (be careful on Google for that song. Things seen are difficult to unsee). You have an idea of what that song is about and you are correct. It isn’t a favourite of mine here but apparently I may be in the minority on that, unsurprisingly. Big Big shares a focal point with Tape Measure (apparently Spice has a fetish of some sorts) (I’m not judging), but it is a slightly better track, with just a hair of old school Dancehall/Hip-Hop. Ranking even higher is Mi Hate Him. You may also be able to guess what this Shane Hoosong licked set is about as Spice laments the fact that for some reason she just can’t let tear away completely from a certain guy in her life (I’ll give you one guess)
[“Him slap it up in every position. Dick ah mek mi flip like mi a Jackie Chan”].
The undeniable changeup of Emancipated is Same Mouth…. it just doesn’t fit into what’s going on here (literally eight songs about sex or sexual things and Same Mouth). Here, Spice finds time from…. well, you know what she was doing, take a moment to warn us all against negative people who may not appear to be so initially
[“The same mouth you feed at yuh table will do to you wah Cain do to Abel”].
It was almost jolting to hear it mixed in here as it comes right between Crop Top and Pop Off but, to its credit, Same Mouth is probably one of the finest efforts on the whole of this release and, musically, it is exquisite for what it is – although it is completely out of place.

The real class on Emancipated comes in a pair of downright intoxicating pieces for me, the almost hilariously clever Bake A Man and Nuff Man Name. The former features Spice itemizing the perfect recipe for any potential suitor and doing so with an absolutely GOLDEN old school Dancehall. Her wants? You know exactly what she wants (see Big Big and Tape Measure), but the repetitiveness of it, does not make hearing it any less fun. Bake A Man is delightful and the single best moment on this release. Nuff Man Name is a song sorta/kinda about BEING FAITHFUL….. sexually faithful, of course. Again, Nuff Man Name is a good time of a song. It may not (it won’t) cure the world of its many, many ills, but it will make thousands of heads knock with a heavy riddim courtesy of JB and there is a value in that.

I could say the same of Emancipated, as a whole. This is the [VERY] light version of 10, but if you stuck around long enough to enjoy that album, what you hear on this set will likely leave you quite pleased. Given its length, Emancipated does come off as a bit rushed (I was damn near shocked that it features no combinations) and I would say that it doesn’t feature Spice at the zenith of her powers — you will not find her BEST work here — so I would likely only recommend it for either listeners who are hardened (probably not the best term to use here) fans of hers or someone who has never heard Dancehall music at all before; someone who isn’t likely to be reading this, for example. For anyone in between, I’d direct you to 10. Emancipated is ultimately a fun, BRIEF, listen which shows, in glimpses, the destructive talents of the reigning Queen of Dancehall music, Spice. If you’ve paid no attention at all previously, it wouldn’t be the worst possible time to jump on but I assure you what is to come will be spectacular.