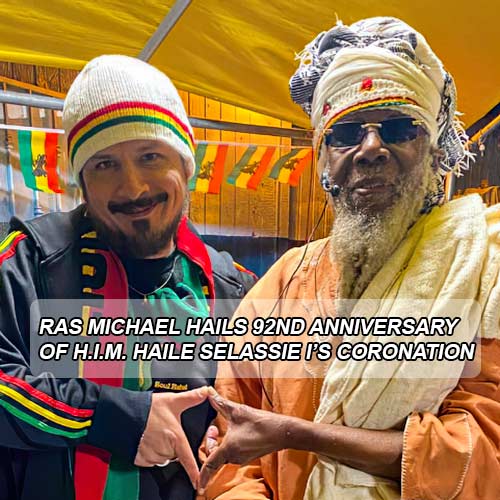 Humbled to meet Ras Michael in-person—on such a historic and spiritual occasion—to praise the ascension to the throne of King Selassie I, the 225th descendant of King Solomon and Queen Sheba, King of Kings, Lord of Lords, Elect of God, and the Conquering Lion of the Tribe of Judah—I arrived early.

My heart was full and my spirit was hungry as I approached the modest yard where the ceremony took place, in Inglewood, a city in southwest L.A. And the vibes? The vibes were electric as the sun was just beginning to set on a blustery day, the wind fiercely blowing many red, gold, and green Ethiopian and Rasta flags; the flags surrounded a large, framed portrait of King Selassie I—centrally positioned for all to see.

The first person I saw was legendary drummer Carlton “Santa” Davis; Santa would later sit next to Ras Michael, and I paid my respects to both him and Ras Michael before taking a seat near veteran guitarist Steve Verhault; Verhault was sitting near a guitarist and singer named “Redemption Sevenfold” (once a member of “Godfather of Reggae” Joe Higgs’s band), and a musician named Zacky (the original keyboard player for the Twinkle Brothers).

Before Ras Michael called everyone to attention with a solemn, sacred prayer, Verhault and I talked about Ras Michael’s beautiful newest album—released in February—called “JahLove’; Ras Michael made “JahLove” almost entirely with Verhault, in Verhault’s home studio. The entire album is essentially a blissful, melodious, prayer to Jah; it magnificently pairs Ras Michael’s soul-stirring drumming, songwriting, and singing, with Verhault’s incomparable, irie musicianship.

Ras Michael was close to late renowned Rastafari elder and drummer, Mortimo Planno, and, both Planno and Ras Michael were Bob Marley’s spiritual brothers before Bob died. As I told Ras Michael, since my youth, I too have felt a deep spiritual connection to Bob Marley through his music which has so profoundly impacted my life.

So I don’t think it’s a coincidence I’ve recently befriended Ras Michael, or, that already, he has had such a significant impact on me. Talking to Ras Michael at length, watching him on Instagram (at “iamrasmichael” where he has well over 10,000 followers), and listening to his “JahLove” album—and his many other musical works closely, and repetitively—has even convinced me, for the first time in my life, that I should read the Bible from cover to cover; you see, Ras Michael has that kind of power.

Although Ras Michael said I should come to the celebration he conducted primarily so I could meet him face-to-face finally, and, “feel the vibes,” I did, as a reggae journalist—trying not to interfere with the beatific cultural service I was observing—take the photos and video footage that accompany this article. I wanted to document the experience so that all reggae lovers, Rastas, and other righteous people worldwide, could get a feel for what it was like. So, as Bob might sing, “One love. One heart. Experience this togetherness mi idren, and feel alright.”