“HAVE TO PLAY WITH FEELING”

Keith Poppin. Not one word can describe this statesman from the Foundation and his half century of endurance in Jamaican music. This is the third interview with the humble artist for Reggae-Vibes and is necessary due to his limitless knowledge and vivid memories of the “good old days” of music making and its makers. Robert “Higherman” Heilman conducted this latest installment after numerous and joyful phonecalls to the legend’s home in North Carolina. An indepth discussion about his latest project, “VINTAGE KEITH POPPIN – THE GOOD OLD DAYS”, Kingston vibrations in the early 1970’s and true experience in the business. Maximum respect to KEITH (for the belief and trust) and TEACHER & MR. T (for the support and being true ambassadors for over twenty years).

“HAVE TO PLAY WITH FEELING”

Keith, it’s been a few years since you released your last album, “Speak Out” (2011). What prompted you to dig into the vaults for your new project?
Well alright, we want to bring back the music to the people’s minds. Back to the ’60s and ’70s. The real Reggae, Ska and Rocksteady. Me catch a little Ska. I started singing in the ’60s and onto the ’70s. The music we used to put out had to be big. Green and red light in the studio. We had to check “green light” and “tape rolling”. In those days, we were coming from 4 track to 8 track and so forth.

The album is available on VP Records, Keeling Records, CD Baby and Ray Hurford’s Muzik Tree (UK). How is the album doing?
Well, the album is doing good, getting good reviews. (at time of writing, #8 on Reggae-Vibes Top 50 chart).

Looking at the back cover, there’s a photo that captures an emotional moment at 2015 Chesapeake Bay Reggae Festival (Virginia festival that featured Winston Jarrett, Carlton Livingston, Tuff Lion and Ras Iba).
OH YES! Singing, singing non stop. Kids joining in, taking pictures… cameras all over and fans on stage with me. This was my first appearance there. A well known festival that’s been going on for 4 years now. People are sending emails wanting me to come back next year.

The material on this set covers roughly fifteen years of your career. One of your first recordings is included?
Yes. Track 13. “Running Back Home”. Recorded that one at Dynamic Sounds.

Your catalogue is extensive. What was the selection process?
(laughs) The tracks are from all over. Got some from Peter I (Sweden), some from John Skomdahl (Long Beach, California) and I got a few from Kelly (big collector from Boulder, Colorado).

So, did some tracks come from your own collection?
Oh yes. “Time Is Slipping Away”, “City Life” (never released), “There Comes A Time” (self production) and “Feel Like Dancing” (never released). “What Have I Done” and “Fed Up” came from Peter I. That one I did on the “Envious” album. Original from Randy’s.

“Dream Lover” has a distinctive Lee Perry atmosphere. Serious cut, right?
I recorded that at Lee Perry’s studio around 1973. Around the same time I cut “Same Thing For Breakfast” (international hit). I did “Time Is Slipping Away” at King Tubby’s in that time too.

The tracks on this collection were recorded at studios like Channel One, Federal, Black Ark, Dynamic, I presume these are just a fraction of your material?
You never know. People are finding songs all the time. They just “pop up”. Different Keith Poppin songs just popping up. (Keith bursts into singing “Play The Music”) Someone in Europe found that one (laughs).

I know you have produced your albums for some time now. There’s plenty of producers eager to work with you right now. Are you open for that?
Well, if they can reach good standards…

I understand you’ll be visiting the U.K in Spring of this year. Been a long time?
Last time I visited England was 1975-6. I did some shows with Jimmy London. (Keith has one confirmed show slated).

Any new projects the massive can expect from Keith Poppin?
Just run the album. We have “Journeys”, “Get Together” and “Speak Out”. We have nuff material to work with. Gotta give these albums some time. People don’t really know about these works. Ray Hurford (noted writer/historian) ordered copies of “Vintage” and “Speak Out”. Needs to come to maturity. I’m always writing and working with present material. Reach the four corners of the world. The songs on the albums are to bring all people together. Mek we know we are all one people.

Keith, it’s so crucial to discuss this project and I’m absolutely honored to be a part of it.
Definitely! Man like you, DJ Ras J and myself are all a part of this album. Big up!! 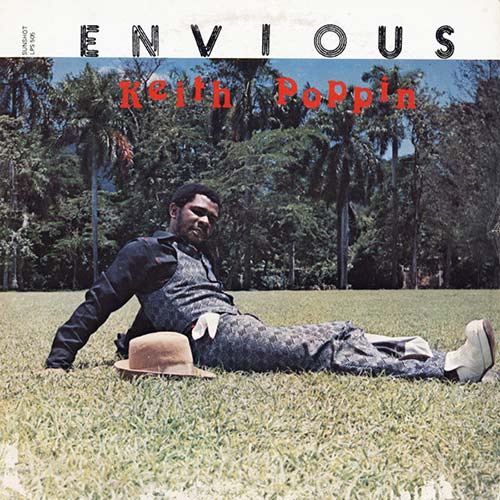 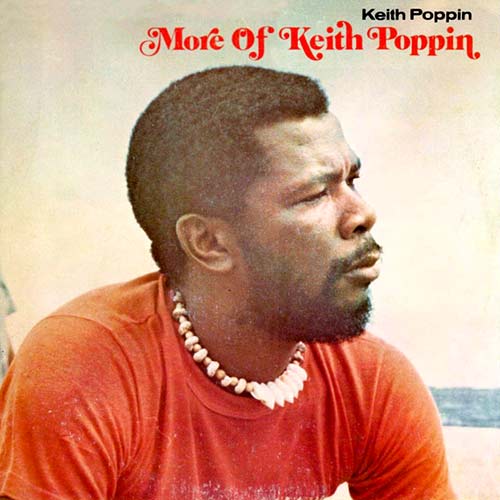 PART TWO – MAN OF MY WORD

What’s the inspiration for “I’m Gonna Make It”?
You know, it comes from the vibes that come over me… I write how I feel. About things not happening that should be.

Tell me about “There Comes A Time”? Keith Poppin on a digital riddim; that doesn’t happen very often?
I did that at a bredrin’s home studio in JA. Barry Bryson, an engineer at Harry J’s.

On “Here I Am”, one can hear some Brook Benton stylings…
In my whole career, people say “you sound like Brook Benton”. Just a tone of my voice. On “Dream Lover”, you have falsetto. People ask me, “have you used that delivery a lot?” Yes, I use my falsetto voice when it needs it. A show of professionalism when you use it when you need it. I sing baritone, tenor and falsetto. The Lord has blessed me with a gift.

“Labrish” has Peter Tosh caliber to it. Was this released on his Intel-Diplo label? (Keith was the first artist signed)
No man. That song was produced by me. Winston Wright played on that at Channel One in the ’80s.

Let’s discuss the hidden bonus track, “Feel Like Dancing”?
I did that at Jimmy Cliff’s studio. Dean Fraser on that song. The Tamlins were there and Harold Butler and Ranchie McClean played on it. Yeah!

Keith, tell me about recording sessions back in the “good old days”?
Back in those days, yeah. Lee Perry liked to record at nite; from like midnight to 6am. When we record, I felt more comfortable taking my shirt off. Like when I recorded “Envious” album. Jimmy London liked to take his shoes off (laughs). In one corner of the studio, Horsemouth (legendary drummer Leroy Wallace) take off his shirt with a big spliff in his mouth! Other people call it “joint”, we call it spliff (laughs joyfully). Back in the day, musicians come in at nite and Guiness and spliff would be there.

Who would bring in the refreshments?
The producer would buy a box of Guiness and musicians would bring their own herb. Lee Perry would like wine. That was his favorite drink.

A lot of people say he loved his rum?
I don’t know about any rum. He loved his wine and spliff. A dark wine called ‘Wincarnis’.

Other producers liked to record at nite?
Phil Pratt recorded at nite. We did the “Envious” album from 12am to 7am. Horsemouth, Familyman Barrett, Lloyd Willis and Bobby Kalphat was all there.

Aston ‘Familyman’ Barrett
Speaking of “Envious”; how long did it take you to record?
A couple of days to lay tracks… then voice over. Then Phil Pratt wanted to release it in England.

Any memorable sessions during those hot Kingston nites?
Well, all the studios were good. You have Lee Perry sound, Randy’s (Impact) sound. You get King Tubby’s sound, you have Harry J’s sound. All those Federal sounds. Top studios back in those days… they carried their weight.

Would you hit the track in one take?
I like to hit the voice the same day. Overdubs would come later, you know, call one of the musicians later. Knock it out the same day. Gotta make studio time available for other artists. Studio time was never free.

You recorded extensively with the Soul Syndicate. Right now, they’re doing some shows in Southern California (December, 2015).
Yeah man! Seasoned musicians. When you say Jamaican music, they are Jamaican music! Back in the day, everything they played on was a hit. All Jamaican musicians – nuff respect!!

What about your thoughts on the Digital Era?
Just a phase. Instead of paying six musicians, you just pay one or two. It couldn’t last. You can’t play from the Heart when you’re programmed. You have to play with feeling! I prefer traditional musicians.

Tell me about artists hanging out at Black Ark?
Well, you had David Isaacs hanging out. Freddie McKay and Delroy Wilson hanging out in one corner. Gregory Isaacs’ record shop around the corner. Randy’s was around there. You had Techniques (Winston Riley) and Joe Gibbs. Going up Orange Street, you had Prince Buster, J.J Records and Beverly’s. Man like Derrick Harriot on King Street and Tip Top (Sonia Pottinger).

This was in the early to mid ’70s?
Yeah. Lee Perry was on Charles Street. Bredda called Charlie Hays was doing his record shop thing. Keith Hudson was right beside Charlie. Everyone was trying to make something good happen. Something you wished for yourself, you wished for musicians.

Gregory ‘Cool Ruler’ Isaacs
Keith, why aren’t you touring now? You have decades of experience and hit records.
It’s been a long time now. I like to tour with proper arrangements; not just catch a plane and go. For the last 7 years, promoters are calling from Brazil. Just send a ticket and gone? Don’t even know how many shows are planned. Don’t know about immigration. Two shows? then go home? Don’t want to take that chance. I’m not looking for red carpet, champagne, no top shelf drinks (laughs). No 500 dollars a nite. I just want the band ready and hang out for a few days.

Any artists you would like to tour with?
I can tell you all Foundation artists/musicians know me. We all used to play together. We still talk about the “good old days” and laugh.

Does your neighborhood embrace Keith Poppin sound?
Most people around here don’t really know who I am. They see me as a regular guy and that’s the way I live my life. Buy a house and achieve my goals. Become a citizen, own a house and car and retire. Still a pretty young man. I’ve invested in my albums and produced 4 albums. No body helped me financially. On the albums, I would fly to Jamaica and record.

TO THE WORLD. Love yourself, love one another. All of us just passing through Earth. Makes no sense to be at war with each other. Let people live out their lives because no one’s here forever. I might be in your town or city sometime soon. True experience… respect to all people. I want to give back to the people who respect me.

Keith wishes to thank Hank Holmes (first DJ to play his music in the U.S), Chuck Foster(who has kept the radio vibes flowing and has been involved in previous Keith Poppin projects) and Prince Thierry (playing his music in France). “Big thank you to Reggae-Vibes crew over the years, from Peter I to you, Bob. This is the third interview! Maximum respect to Teacher & Mr. T (holding reggae-vibes.com strong). Special mention to Ray Hurford (Small Axe & Muzik Tree). Thanks to everyone whose been thinking about me and supporting me over the years. I hope to see everybody live in concert in Europe and beyond very soon. I also want everybody to donate to a charity. I have been doing it year after year. So many people need help all over the world”.