King Yellowman Defends Gay Rights at Reggae on the Mountain 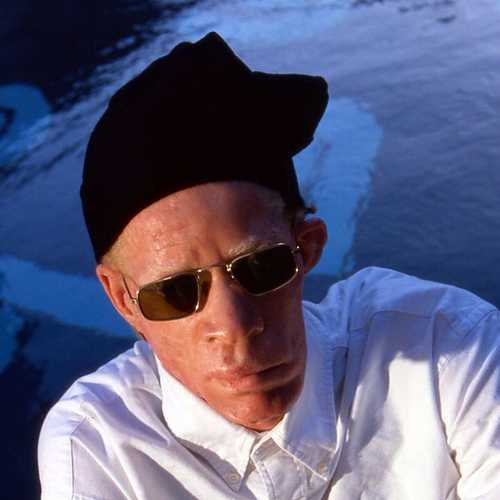 “KING YELLOWMAN DEFENDS GAY RIGHTS AT REGGAE ON THE MOUNTAIN”

Born with albinism in 1956, dancehall music legend King Yellowman was rejected from birth. As a baby, he was found in a supermarket’s trash heap in Kingston, Jamaica. Miraculously surviving and raised in orphanages, he was ridiculed, called names, and abused. Yellowman was scorned solely because of his color. However, possessing preternatural musical talent, an indomitable will, and braveness beyond belief, Yellowman surmounted these Herculean obstacles, and more. After Bob Marley’s death, in 1981, he became one of the world’s biggest music stars, back when dancehall first took off beyond the confines of Jamaica. Indeed, a recent book review in The New Yorker of “So Much Things Things To Say: The Oral History of Bob Marley” (written by Roger Steffens and published by Norton), asserts that after Bob’s death, “brash new [dancehall] stars like Yellowman, made Marley’s roots-reggae seem antiquated.”

“KING YELLOWMAN DEFENDS GAY RIGHTS AT REGGAE ON THE MOUNTAIN”

Beating back Father Time, and even cancer – which caused him to undergo a series of life-saving but disfiguring surgeries – Yellowman is still triumphing over life’s obstacles. He’s still making new music. He’s still touring the world. And, with his patented, provocative swagger, he’s not shying away from taking strong stances on social issues.

I was blessed to interview King Yellowman on Saturday, July 22nd, shortly after his electrifying performance as a headliner at the 8th annual Reggae on the Mountain in Topanga Canyon, California. Both performing, and later, during my interview, Yellowman was joined by another dean of the Jamaican dancehall scene, Papa Michigan. Best known for a string of hits with former partner General Smiley, like the 1982 chart-topper, “Diseases,” Papa Michigan, like King Yellowman, has never shied away from saying what he believes. What follows is a transcription of our discussion modified only slightly for clarity and space considerations. 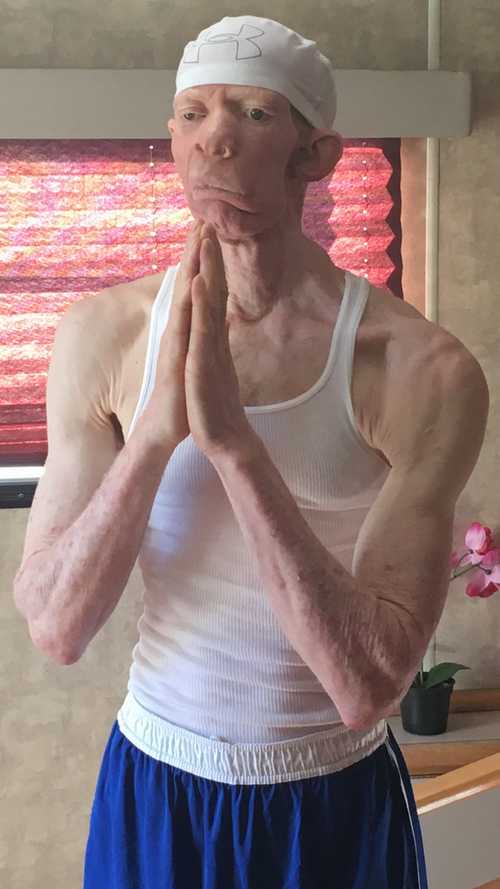 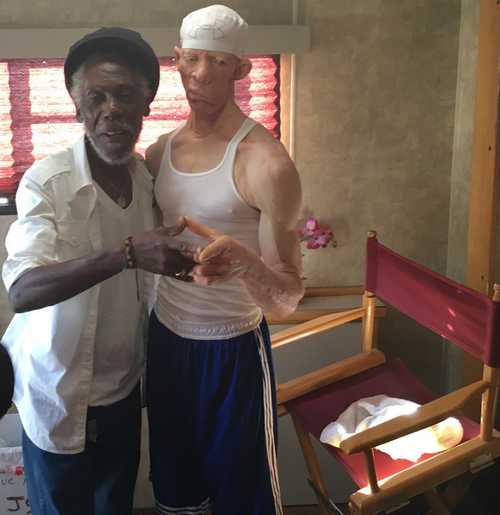 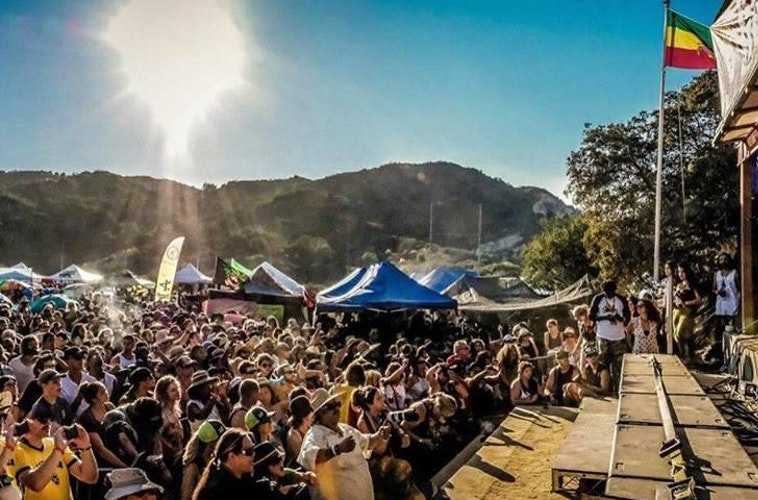 Mr. Yellowman, thank you so much for meeting with me. When I see all those fans out there – a lot of them weren’t even born when you were in your prime – in the early-to-mid-1980s. Yet, they’re singing your songs. They know your lyrics. Does that ever surprise you? That young folk, especially here in California, know your music?
When you do good music, it moves over from generation to generation. Like Bob Marley. Like [Papa] Michigan. Jimmy Cliff.

The music lives on. Absolutely. Now, you’ve had such a long and historic career. You’re the undisputed King of Dancehall Music: you were the first dancehall artist to sign an international recording contract; the first dancehall artist to perform with a rap artist – Run DMC. You’ve influenced so many artists all over the world. And your songs are sampled constantly.
True. True. True. True.

And I’ve seen many interviews you’ve done. And I know you’ve had health struggles. And I guess I wonder, when I see a legendary guy like you, a guy who, as you said, whose songs will live on.
Yeah mon.

I would have thought that a guy like you would be comfortably retired by now, in their house
in Jamaica. Or walking the streets. Getting the respect. Just basking in the glow of a legendary career. So, I wonder, what makes you keep performing?
It’s everything. But especially, you know, I love the music. This is my purpose. I don’t do anything else but music.

Absolutely. And I know you’re still making new music. You had a song released just last month – a very mellow tune. It’s called, “Everything’s Gonna Be Alright.” And it’s on a compilation called, “International Redemption Riddim.” It’s a cover of sorts of Bob Marley’s “Three Little Birds.” Great song! And I know you’ve also been performing with one of your daughters, Kareema Foster?
Yeah mon. We’re going to [tour together in] Japan next month.

Now, I know you have seven children – five sons and two daughters. And that, you’ve always been involved in your children’s lives. And also, that you’re still married to the same woman, Rosie, after all these years. And you’ve always had a clean lifestyle: You don’t smoke, you don’t drink [alcohol], you don’t eat red meat. It seems like you have two personas. You have the guy who gets on stage as an entertainer – brash, provocative, in your face. Sometimes, sexually charged. But the Yellowman who gets off of the stage seems like a very different man: A family man. Quiet. Lives cleanly. Do you think you’ve suffered in your career, especially during your prime, through the loss of endorsements and sponsorships, because people were confused about the difference [between your on-stage and off-stage personas]?
Some of it, yeah. Because they label me that way, you know? 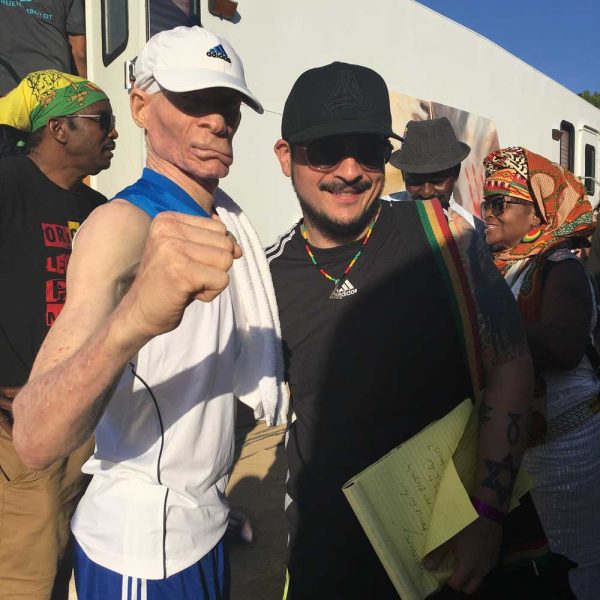 You’ve said they blame you for the “slackness” style. And, for example, with your mega-hit, “Zungguzungguguzungguzeng”, that they didn’t know what it meant. So, they just assumed it was something sexual, and banned it from the radio?
Right. It’s a misinterpretation. Because, if they’re talking about “slackness,” all of us slack. We [all] come from a woman. We have to make love.

You’ve spoken before about how you were scorned and discriminated against in your life and career [because of your albinism]. And, one of the reasons you are so loved, in Jamaica and around the world is, you took that hate and discrimination that you suffered, and you overcame it. You came out strong and said, if you want to call me yellow, let me sing to you about all the yellow babies I’m going to make. And the people loved you for it. It was a heroic thing, what you did, I think. Now, in 2013, you were interviewed on a program called “Empress’ Studio” in Kingston, Jamaica. And during that interview you said, “the biggest problem with dancehall music is the lyrical content.” Can you say more about that?
Yeah mon. What I mean about the lyrical content [is] the violence and the separation. They are getting in a lot of trouble with the law also.

In that same Empress’ Studio interview you spoke out eloquently against the discrimination gay people face in Jamaica. And, how Jamaica suffers because of that image problem.
That’s the reason why dancehall suffers.

Yes. And I’ve been trying to get to the bottom of this by asking Jamaicans I know why homophobia remains so prevalent in Jamaican culture. Some of the things I’ve heard are: that there’s a biblical aspect with people being taught it’s a sin; that the law has not changed in Jamaica – there is still a law criminalizing homosexual acts; that people associate homosexual behavior with the molestation of young boys due to the priest scandals; and also, just a sheer lack of worldliness – not ever leaving the island of Jamaica – and therefore, not having that experience with different kinds of people.
No, they don’t. They don’t know. They don’t know that gay people are normal people. They don’t know that gay people are nice people. Just like any other people. And [gay people] love reggae music. Yeah. And [gay people] love Jamaica. Yeah mon.

Is there hope for change?
Them keep talking, but it never happen. I don’t know why. Just the other day they say they are gonna look [at repealing] the buggery law. And then, I don’t hear anything more about it.

Are you more sympathetic to discrimination than the average Jamaican? Because of the discrimination you’ve endured? Being abandoned by your parents. Thrown in a trash heap. Not adopted. Called names. All this, because of your skin color.
Yeah mon. Because, we’re all one people, you know?

I understand your wife, Rosie, is related to the Marley family. Were you friends with Bob Marley when he was alive?
Yeah mon. Very good friends, yeah. Because his mother [Cedella Marley] used to love me.

What do you miss most about Bob Marley?
I miss a lot of things about him. Just the other night, I dreamed about him. And he told me, “Every little thing gonna be alright.” Yeah mon.

That’s a great dream. Does the Marley family and the Marley estate – do they have an obligation to do more to invest in reggae music in Jamaica?
Half and half. Because, it’s their money. So, I can’t say what they must do. But, I wish they would do that.
Papa Michigan: They’re doing a lot man. The Marleys are doing their stuff, man. Junior Gong – they are doing their stuff. They have their cruise that they have a lot of artists on. Which is very good. They invited me, and I went there. So, they are doing their thing. Bob suffered. So, Bob Marley had a different mentality. These kids didn’t suffer. When you suffer, you do things different. So, you can’t compare these kids with Bob Marley. It is unfair.
Right. Bob do a lot of things.

What about the Jamaican government? Why haven’t they done more to support reggae music?
They never liked reggae music. They are prejudiced against reggae music.
Papa Michigan: At first, it was a ghetto thing. Even with Bob [Marley]. They were very prejudiced against the ghetto.
And prejudiced against Bob, too.
Papa Michigan: And prejudiced against Bob, too. All of us got labeled. But, right now, we can’t depend on anybody to do anything for us. We have to do things for ourselves. So, if we have ‘X’ amount of money, we need to build our own studios. We have to be self-reliant. Don’t lean on anybody. I come here today – I didn’t come to perform with my friend. I am in town and I heard Yellowman is on stage. And so I come to visit him, you understand me? We [as reggae artists] have to support each other. We have to strengthen each other. We don’t want to lean on nobody. We stand up by ourselves. You understand me? So, when some people talking, “poor this and poor that,” we were born rich! We were born abundant. We have to understand, we are kings! If we don’t understand we are kings, we don’t know where we are going. Selassie was rich! So don’t let nobody come tell you about nothing poor!