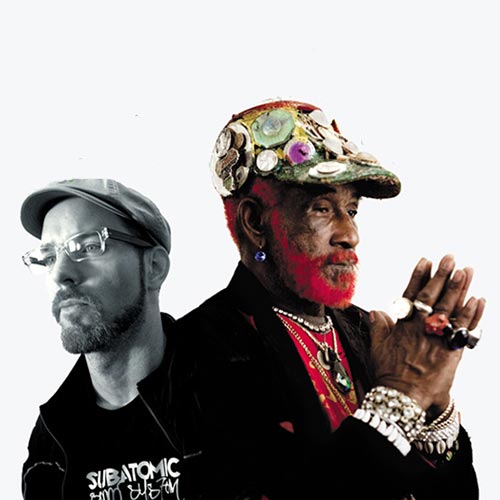 It’s hard to gauge the immensity of Lee “Scratch” Perry’s contributions to music. By dint of boundless passion, creativity, and preternatural skills at the mixing board, Perry, known as “The Upsetter,” not only propelled Bob Marley and countless other Jamaican musicians’ careers to international stardom – he pioneered dub music, which, in turn, birthed hip-hop.

That’s why, without hyperbole, Ibrahim “Ebro” Darden, a radio host for Hot 97 in New York City and a DJ on Beats 1 (an Apple Music internet radio service), posted to his Twitter account on October 23: “Today I interviewed THE most important person in music culture of the last 60 years, Lee Scratch Perry.” It’s also why veteran radio personality and reggae expert Junor Francis, his voice trembling with heartfelt emotion, could barely contain his excitement when called onstage the night of November 1 to introduce Perry at Los Angeles’ popular Dub Club.

Perry, in town to promote his new album “Super Ape Returns to Conquer” – a sonically superb reimagining of his classic ‘76 Super Ape album – played a spiritual, spellbinding, two-and-a-half-hour-plus set backed by New York City’s Subatomic Sound System. The capacity crowd knew they were watching a living legend and might never get the chance again; most would have stayed all night watching the octogenarian perform if they could have, swaying, skanking, and smiling with the rising sun.

Throughout the performance adoring fans reached out to shake Perry’s hand and present him with all kinds of gifts including clothes, jewelry, even a stunningly life-like and life-sized portrait a super-fan had painted and passed up on to the stage. More than anything the jubilant reggae faithful just wanted to show Perry their love and undying appreciation.

When finally, at 2 A.M., Emch, Subatomic’s band leader informed the still spry “Scratch” they simply had to end the show, deafening chants of “Lee Scratch Perry” rose up as Perry exited stage left, arms raised high above his head in triumph. The “Super Ape” had returned to Los Angeles, and no question about it, he conquered.

Afterwards, at approximately 3 a.m., I was humbled to interview Perry backstage for 10 minutes, and to give him a present too – a beaded Rasta-colored ring I’d recently purchased at Reggae on the Mountain – which he immediately put on his already bejeweled finger. The many topics we discussed included: the proper interpretation of the “Super Ape”; whether, despite becoming more mainstream, reggae and dub still qualify as “underground” music; the status of his marijuana consumption; Bunny Wailer’s allegations about why and how Perry’s relationship with the Wailers dissolved; and finally, Perry’s relationship with Bob Marley, and his nonexistent one with Marley’s sons. What follows is a transcription of the interview modified only slightly for clarity and space considerations. 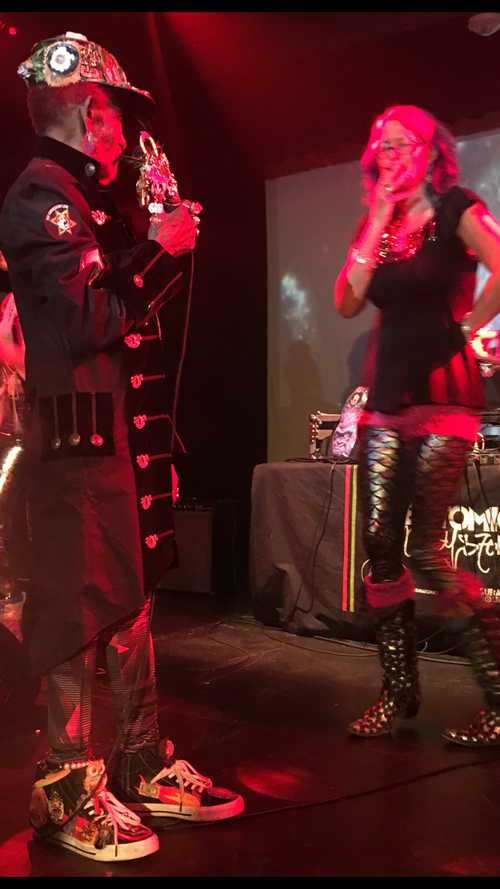 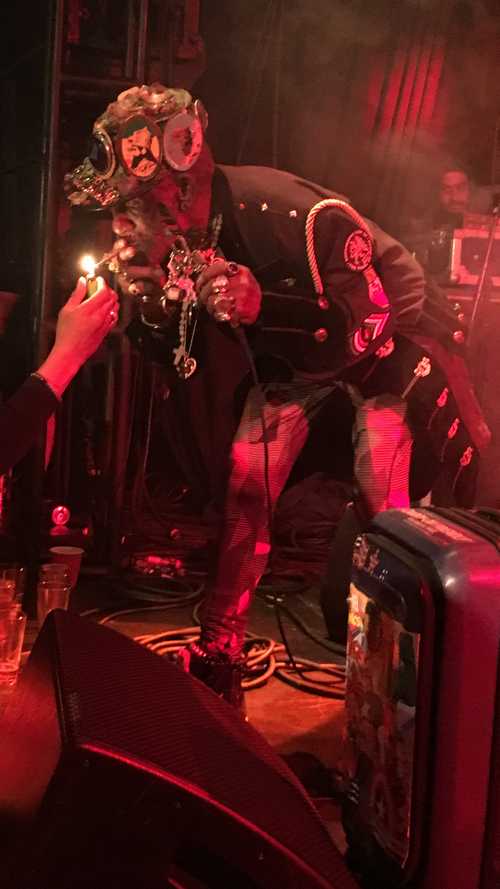 How are you, Mr. Perry?
Doing good.

How’d you feel about the show tonight?
Good show. Yeah.

The crowd loved it. I know this was one of your first shows as you begin to tour North America to promote the release of your new album, “Super Ape Returns to Conquer.” Looking at your tour dates, I couldn’t help but notice you also played just last night, on Halloween. Which I found interesting because your music has always been concerned with chasing devils, duppies, and vampires away. Did you have more trouble than usual combatting evil spirits last night?
(Takes long draw from ½ finished spliff, considering question . . . . Coughs.) Everything is working perfect. No problem.

In 2008, an online magazine called “The Upsetter Station,” which followed your music closely, published an article discussing the significance of the cover art of the original ‘76 “Super Ape” album – which is similar to the new Super Ape album cover [both feature a towering ape who menacingly stares out at the viewer while smoking a spliff]. It said, quote, “The Super Ape is a Babylon nightmare come true: Rastafarians who have broken free from their chains and are intent on escape or revolution.” Do you agree with that interpretation?
(Nodding. Inhaling deeply.) Yes. That’s it.

One of the reasons you’re known worldwide [and maybe on several planets too] as one of reggae’s founding fathers – the man who pioneered dub music as a genre – was your wizardry at the mixing board. You played it like an instrument. No one had ever done that before. Watching old videos from the 1970s of you in your studio at the Black Ark – it’s just amazing [how you used limited technological equipment to manipulate the music, creating new and unique sounds]. You don’t do that on stage anymore. And I wondered if you miss doing that? Or, if maybe you do it by yourself still in your home studio in Switzerland?
(Laughing. Coughing. Shaking head. Smoking.) The people who need help, run and get help. They don’t remember where they get the help. If the devil wants to reach the top, then the devil trying to use God to reach the top. ‘Cause the devil have no creation. The devil can’t copy.

Absolutely. But, are you still mixing ever? Are you still using the mixing board sometimes?
Well, God got nothing to lose. Them who think they can use God, they wiping out them own selves. If you think you can use God, you are destroying your own self.

Yes, sir.. One of my favorite songs on your new “Super Ape” album is “Underground Roots,” which you played tonight. This is a fresh take on the song simply named “Underground” on the original Super Ape album. [The original track is overwhelmingly instrumental; its only lyrics are “underground roots are collie roots.”] It features stirring and sultry new vocals by Ari Up [member of the first all-female U.K. punk band, “The Slits”]. And I know Ari Up tragically passed away in 2010. Could you describe your relationship with Ari Up and the decision to feature her vocals on your new album?
The Earth is the Lord. Everybody walks on the earth. And nobody respects the Earth. Everybody who walks on the earth, shits on the Earth. Spits on the Earth. Don’t respect the Earth… So the Earth didn’t like it. So the Earth call for a revolution. And the earth [is] fighting back. The Earth call for a revolution. The Earth call for justice. And the Earth get justice. ‘Cause the Earth release ganja. The Earth release herbs.

On this new “Underground Roots,” you can be heard chanting “underground truths.”
Yes. 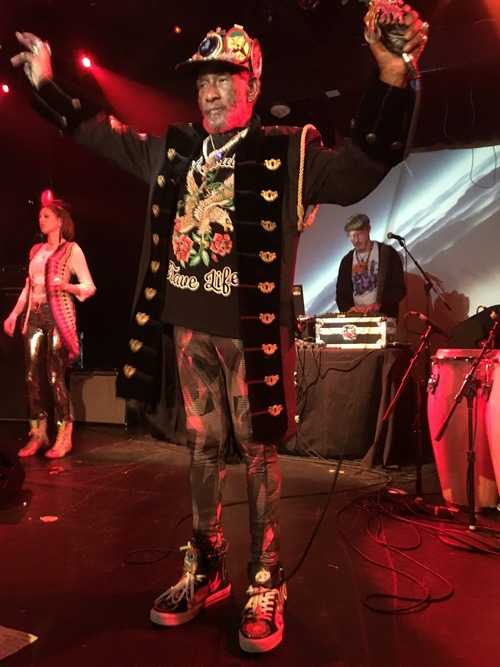 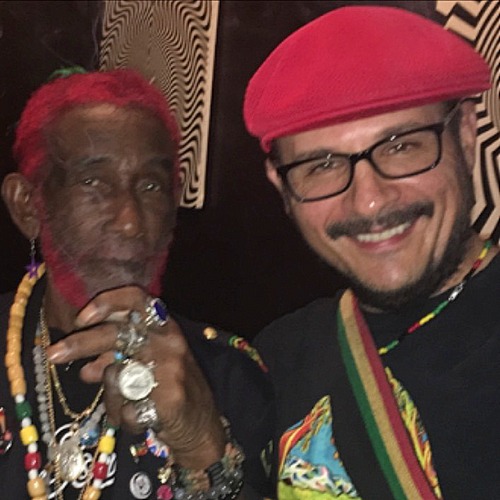 A couple of years ago, I think around when you turned 70, you said you were going to stop smoking weed.
(Takes long draw.) Yeah. (Laughs.)

Did you change your mind?
I tried to change my mind. So, I’m not smoking like I used to anymore. And because of the birth control. It works. Birth control. And it depends on what they put in the herbs. If they put cigarettes in the herbs, it’s poison.

So you have to make sure you get the right weed? The right herb?
(Nodding.) With no cigarette in it.

You do still smoke good weed then, just in moderation?
Not so much, yeah.

You talked about Bob Marley on stage tonight.
Yeah.

And you produced and were involved in some of Bob Marley and the Wailers’ biggest hits. Do you, however, regret any of the things that happened that caused you to split with Bob [and The Wailers, who subsequently signed a contract with Chris Blackwell and Island Records in 1973]?
It was my duty. It was my duty to do that. What I do [is] in the spirit. He need help. And mi could help him. Mi have to help him [with his career] and do it. ‘Cause nobody else could do it.

But, what about Bunny Wailers’ claims that you split over money? Over royalties? What do you think about that? Is it true? That you split with Bob and the Wailers over money? Or, was it something else?
Bunny Wailer has a grudge. He needs energy, [and] he needs power. And him don’t have none. Him don’t even like him own self.

Bunny Wailer has even claimed that when you guys broke up, he actually physically beat you up. And then, he said that the next time he saw you, there was a meeting. And you had someone deliver a bottle of acid to the meeting. Then he says Peter Tosh got angry and knocked the bottle of acid out of your hands and it spilled on the ground, fizzing. Is any of this true?
He’s just a liar. He has a grudge. And his grudge is going to eat him out. Doesn’t know what he’s… Maybe, he can’t find the answer. Him foot might turn into cancer. Who knows? ‘Cause he deserves to be eaten out, you know?

Ziggy Marley has said you were instrumental in his father’s career. Do you have a friendship or any relationship with Bob Marley’s sons?
The Marley sons? I don’t have any connection with them.

Bob didn’t choose God? He chose the devil?
That’s why him not here.