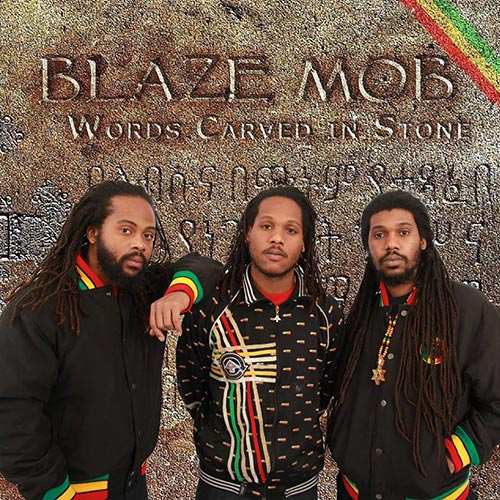 On a recent Tuesday as the sun descended in Los Angeles, disappearing in an earthy, caramelly glow, the Melody Lounge in Chinatown was set ablaze by a mob – the dynamic reggae band “Blaze Mob” – with harmony, unity, and the positive vibrations conscious roots reggae music springs. Composed of brothers Shaka “Rock” Dennis, Gyasi “Gong” Dennis, and “King” Saeed Dennis, Blaze Mob was throwing a listening party to promote their second full-length studio album “Words Carved in Stone,” released on the fittingly named “Dennis Dynasty” label; fittingly because the three young men are sons of Rudolph “Garth” Dennis, an original member of Black Uhuru and longtime singer for the Wailing Souls – a seasoned, veteran musician, who, by any reasoned estimation, is a foundational figure in reggae music.

Shortly after its release in March, a reviewer for United Reggae wrote that Blaze Mob’s “Words Carved in Stone” is “one of the strongest collections of roots-reggae by an upcoming group in some time. The 16-song set is a blend of old school and contemporary sounds that appeals to a diverse demographic.” Wholeheartedly agreeing with this assessment, when Garth Dennis invited me to Blaze Mob’s listening party, I was overjoyed to accept. And, as the listening party neared its end – spilling into the street as a fun party often does – my good fortune continued as I was able to interview the band briefly, for about ten minutes, before they were swallowed in the scrum of fans frenetically jockeying for some final face-time. What follows is a transcription of the interview, modified only slightly for clarity and space considerations.

Congratulations on the release of your new album, “Words Carved in Stone”! The album was released at the beginning of March. How has it done so far, and what have you guys been doing to promote the album?
Shaka Rock: The album is surprising us: the feedback on Spotify and Pandora, all of the digital streams; it’s worldwide. Our streams are worldwide. We’re getting 10 to 15 thousand streams a month off of the reggae, and we’re independent. So to us, that’s a good vibe. It’s a good energy. “Words Carved in Stone” is doing well for us, you know what I mean?

Respect. And why did you name the album “Words Carved in Stone”?
Shaka Rock: Well, when you come up with an album, you have to have a theme, you have to have a message. And for us, when we’re making reggae music or anything, it has to be permanent. It has to be something that’s constant, that’s forever there. The hieroglyphics on the stones in Egypt are permanent. So, we’re making permanent music that you can always go back and listen to, like all the legends and the forefathers before us. So when you hear “Words Carved in Stone,” it’s just musical messages that’ll last forever. [For example, in] any situation that you’re going through in life, you can always bounce back to Bob [Marley], bounce back to Peter [Tosh], and bounce back to Bunny [Wailer]. So it’s “Words Carved in Stone.”

For people who are just finding out about Blaze Mob right now and don’t know about your first [full-length studio] album “More Consciousness,” can you explain why you named your band “Blaze Mob”? What does the name signify?
Gyasi Gong: Blaze Mob is an acronym. It [stands for] “Born Leaders Achieving to the Zenith of Existence Moving Over Barriers.” You’re born as a leader. You’re born to achieve to the zenith – the highest level of your existence. And we’re here to move over all barriers; like Bob Marley said, “move all barriers out of the way.” 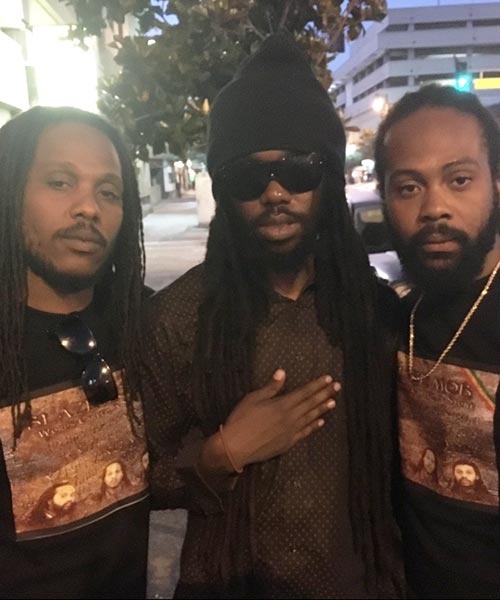 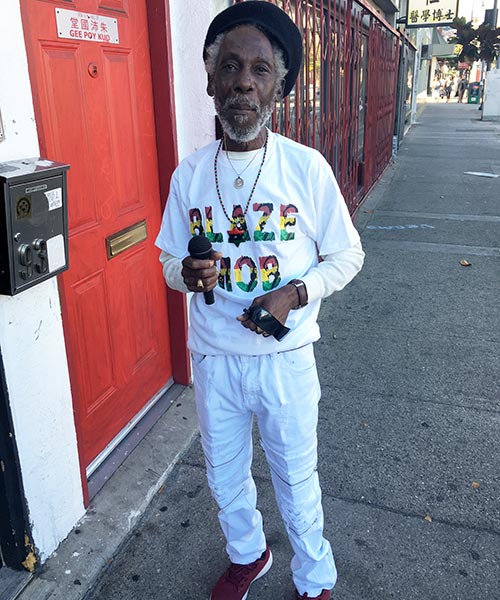 Now I have to ask: do you ever worry people might get confused and hear the name “Blaze Mob,” and [automatically assume] these are a bunch of guys who just smoke a lot of weed?
(Everyone laughing.)
Shaka Rock: Well, you know what? We do smoke a lot of herb. So don’t get confused. Yes, we do. We are ganja [babies]; our father is a chalice man. So when it comes to herb, yes, you can associate it with that. But the name “blaze” and the “mob,” you know Bob Marley said, “an angry mob, is a hungry mob.” So for us, we’re just letting the people know that we are more of a blaze that plays for consciousness, a blaze for the people. Without fire you can’t get no purification; without a blaze, you can’t get no change.

True. Now, as you know, I’m here tonight as a result of your legendary father [Garth Dennis]’s generous invitation. Could you speak for a moment about some of the most important lessons you learned from your dad about being in music?
Shaka Rock: There’s three of us, right? Let me speak for me [first]. For the first [lesson], I would say, that the message is in the music. At all times, he will tell us: “Listen son[s], the message is in the music. So what you say and what you put out, [what you] put in the music, make sure the message is always conscious, and the people will [gravitate toward] it.”
King Saeed: Adding to what my brother is saying, if you keep the message of the music positive, that’s what you’re gonna get back. That’s what [“Words Carved in Stone”] is about: positive messages.
Gyasi Gong: Yeah, I would just say stay[ing] humble. Because daddy is a humble man, you know? So I would say [he teaches us] to just stay humble, and to be open – open to all the opportunities and blessings that come our way.

Now you guys are based in Los Angeles, but you started out in Kingston –
Gyasi Gong: Yeah mon.

– Jamaica. And I wondered, because there is such a vibrant music scene in Kingston, how come you decided to launch your music careers from L.A. instead of Jamaica.
Shaka Rock: Well we have a lot of deep roots in California when it comes to bringing the reggae music from Jamaica to California. When you talk about Joe Higgs, when you talk about Boom Shaka, when you talk about Fabian Cooke, when you talk about the foundation members who really brought reggae to California, elders like Ras Michael, those are uncles and relatives to us. We were kids at the time when our parents decided to bring that good vibration from Jamaica to California. So we have an honor and a duty to represent [and hold up the] banner for California. But when it comes to reggae music and Jamaica, it’s hand in hand. With the social media, and how reggae music is going and music in general, it don’t matter where you are. And for us, we went to Jamaica for this last album to do the pre-production and meet with the [sound] engineers. So to us, as long as you take the time to go back home and develop your soul, and pay homage to where the foundational vibe comes from, it’s all hand in hand, you know?
Gyasi Gong: And actually our music career did start in Jamaica. That’s where we were self-taught, that’s where daddy was bringing the instruments and everything.

Where is that?
Shaka Rock: That’s downtown [Kingston, Jamaica]. North Street. It’s in the middle of where anything [might] pop off. You know how in America they say “the hood?” Inna Jamaica, we say “the garrisons.” That’s North Street right there.

You guys received a lot of musical training I know from your dad, but did you receive any formal music instruction at St. George, or other places?
Shaka Rock: No, not at St. George’s. We had a music teacher by the name of “Ms. Georgia” who my dad flew over from Cuba to Jamaica. That was our first vocal instructor. She prepared us for this time. She taught Yashemabeth (you know, Freddie McGregor’s daughter), Damian Marley, Tony Rebel, Freddie McGregor – a lot of the foundation artists and second generation artists too.

Was she a famous singer herself?
Shaka Rock: No. She was just a wondrous woman that loved music. And if you sing off-key, she go and slap you on your hand (laughing). So big up Cuba! And big up Ms. Georgia! If you’re hearing this and you see us in the world: Wah gwaan!?

I know you have to go [and greet your fans] now so I just want to tell you that I’ve been listening to “Words Carved in Stone” more and more, and I think it’s a great album. I really dig that song “Big Road” and I just love the video you made for it. It’s very colorful and it just has a great vibe to it.
Shaka Rock: Give thanks. It’s a blessing, you know? What we realized in reggae music for us is, harmony is a crucial thing. We always make sure if we’re going to do music, that there’s harmony in the vibe. And then, what we realized too is that a lot of [artists] coming out of Jamaica want to crossover or want to appeal to the North American market; they tend to have more of a hip hop and R&B influence. We went [the opposite way,] a [strictly] roots reggae route. 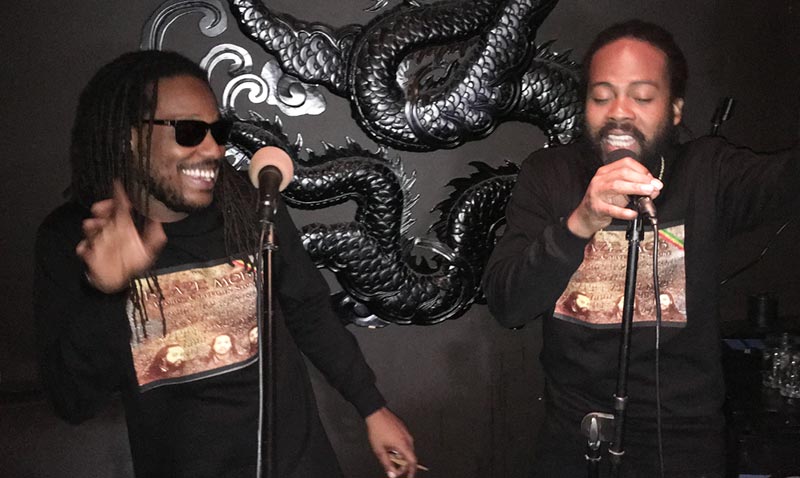 It’s a very conscious album. And I was saying to your dad earlier tonight that I have a lot of respect for you guys. Because [artists] make choices about the kind of messages they’re gonna promote. And you guys are promoting Rastafari and conscious messages on this album. There are many, many deep and moving songs. And you have fantastic collaborations with some exciting young reggae artists on the album too, like Alex Marley, Micah Shemaiah, and Bunny Wailer’s son, Asadenaki; artists who’re part of the next generation of conscious roots reggae singers. You’ve found a way to fuse old school roots reggae, and show it the proper respect, while bringing a new vibe to the music and keeping it current. I’m a Blaze Mob fan and I’m looking forward to another show, and another time when we can all sit down together to continue the conversation. In the meantime, give thanks for a great time tonight and good luck with the new album!
Shaka Rock: Give thanks.
King Saeed: Rastafari!
Gyasi Gong: Bless.