It’s an incredibly sad week for the reggae world. After the news that one of Jamaica’s foremost trombone players, Ronald “Nambo” Robinson, had returned to Zion in the night of Tuesday January 24th, the reggae fraternity reached shocking news again. On Wednesday January 25th legendary singer Ronnie Davis has passed away after suffering a major stroke on Monday January 23rd, 2017.

Born on July 4th, 1950 in Savanna-la-Mar, Westmoreland, Jamaica, Ronnie Davis (real name Jerome Constantine Ballin) started his singing career by entering local talent contests in the early 1960s. He formed a group called The Westmorlites, but his big break came in 1968 when he was asked to join The Tennors by the group’s director Clive Murphy, to replace Maurice Johnson. Davis recorded a string of singles with the group during the late 1960s and early 1970s including his debut “Whole World Is A Stage”, but always yearned for a solo career. When he continued as a solo artist he enjoyed a number of hits through to the mid-’70s including “Jah Jah Jahovah”, “Forget Me Now”, “On And On”, “Babylon Falling”, “Fancy Make Up”, ‘Pretend”, the chart-topping “Won’t You Come Home” for producer Lloyd Campbell, and one of his best-known solo tracks, “It’s Raining”. Davis also recorded with Bunny “Striker” Lee, who produced his 1977 solo album “Hard Times”. He furthermore worked with other producers such as Phil Pratt, Lloydie Slim, and Lee “Scratch” Perry. Davis also cut a few singles under the pseudonym Romey Pickett. 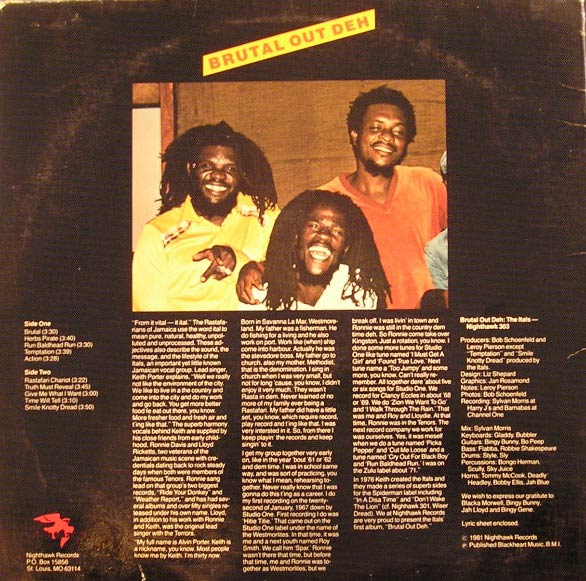 “In A Dis Yah Time” – a single featuring the “Won’t You Come Home” riddim with vocals by Keith Porter and Davis, was initially credited to Keith & Ronnie, but recognizing the popularity of vocal trios, with the addition of a third vocalist, Lloyd Ricketts, the song was re-released, credited to The Itals, and proved to be one of the year’s best-selling singles in Jamaica. The group became Jamaica’s premier vocal group following the success of their “Brutal” album. Davis enjoyed major success as a member of The Itals, recording and touring the globe. Their 1987 release “Rasta Philosophy” was nominated for a Grammy Award as Best Reggae Album. While a member of The Itals, Ronnie Davis pursued a parallel solo career, his next album being a split release with Gregory Isaacs titled “Gregory Isaacs Meets Ronnie Davis”, for producer Ossie Hibbert (1979), with further releases following, including 1985’s “The Incredible Ronnie Davis Sings For You And I”.

Davis remained with The Itals until 1994, when he formed the vocal group Ronnie Davis & Idren, featuring harmony singers Roy Smith (an old school friend), Robert Doctor and fellow former-Ital Lloyd Ricketts. The group performed around the United States, and in 1997 released their first album, “Come Straight”, to much critical acclaim.Davis toured with The Pocket Band of Washington, DC in 2007 and 2008. In 2009 Davis again joined forces with Keith Porter and David Isaacs to tour as The Itals. Davis and Keith Porter continued to tour as The Itals after the passing of David Isaacs in 2009 and Lloyd Ricketts in 2011. Then in March 2012, after a near 35 year hiatus, The Tennors reunited with George Murphy aka Clive Tennors, Ronnie Davis and a new member Henry Buckley, Jr. aka Sadiki. Ronnie Davis experienced a major revival of his career recently, with the release of his 2016 album “Iyahcoustic”.