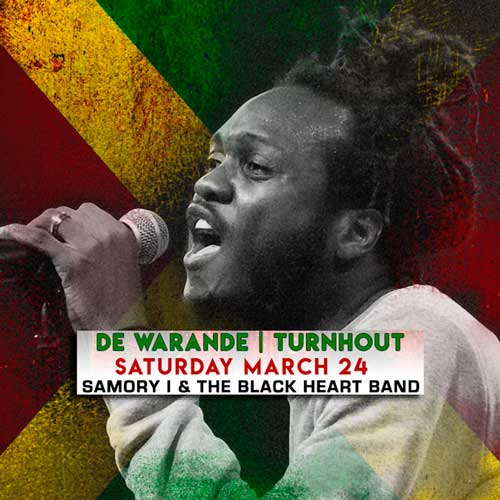 In 2016 Roots Reggae singer Samory I embarked on his first international tour, which took him on 17-day trip to Europe. Two years later he returns to Europe with a critical acclaimed debut album called “Black Gold” under his belt. With his backing band The Black Heart he kicked off his Black Gold Tour 2018 in France, followed by shows in Germany, the Netherlands, Switzerland, Austria, Sweden and Belgium.

On Saturday 24th March he played at Warande-Kuub in Turnhout, Belgium. Attended by a most of the times enthousiastic reacting crowd, the vibrant Jamaican Roots Reggae artist and his tight playing band – with veteran musician Franklyn “Bubbler” Waul of Taxi Gang fame on keyboards – treated the fans to a one and a half hour lasting energetic set which featured many, if not all, songs from his first full length album. Along came so-called ‘Black Dub Style’ versions of tunes such as “Son Of David”, “Serve Jah”, “Black Gold”, “Lost Africans”, “Weed”, “There Is A Spirit’, “Is It Because I’m Black” and, of course, “Rasta Nuh Gangsta”. It was a bit disappointing that he only did a small vocal part of that awesome roots anthem and then left stage to leave it to the Black Heart to end the show.

Here’s an impression of the show, which displayed the artist’s potential, but also made clear that a young artist like Samory I has to grow and develop himself further to keep all those who are attending his show involved from beginning to end.