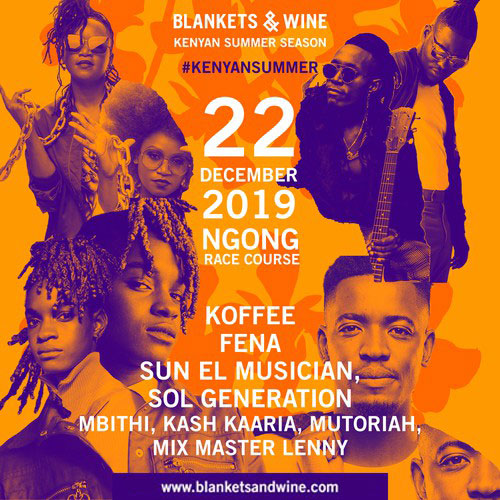 KOFFEE BREWS A KENYAN SUMMER TOAST FOR BLANKETS AND WINE

One of the most anticipated music concerts took place at the Ngong Racecourse this past weekend as reggae superstar Koffee backed by her official deejay Rachael Anson on her first Kenyan concert debut left the crowd feeling lifted.

It’s hard to believe it has been more than a decade of the best in live music, fun, friendship, day drinking and the ultimate Nairobi Sunday plan, but that really is how long Blankets And Wine has been vibing together with us.

As we enter the Ngong Racecourse on Sunday afternoon accompanied by my partner and awesome photographer, Kelly Ewing, we can’t help but get blown away by how the venue is transformed. Honestly, the reception from the Mookh ticketing team and Blankets and Wine staff is just humbling. The cool gang from Boguk Hats (Bevern and HB) join us for a light conversation with jokes on why we still have not bought our Boguk hats.

The food court lies on the further edge. Now behind us, the vendor tents on the side, we make a stop at the art space where these two graffiti arts are painting both Muthoni Drummer Queen, Blankets and Wine founder and the small but mighty, Koffee. The symbolism is quite phenomenon. Both acts, different in ages yet united by one thing. Both, having been inspired by music, decided to try it.

We make our way to the stage to secure our spaces. The crowd is diverse and it just hits you once more this may just have been another “where were you when” moment in Kenyan live music and events history.

Storming on stage a few minutes past 3pm, fashion blogger turned musician Kash Kaaria is the opening act. She throws herself right into the set backed by her amazing band, before breaking into well synchronized routines with her dancers. Commanding the stage with every song and quick wardrobe changes, at some points the dancing and singing seems heavy on her but her resilient vocals remain steadfast.

“Thank you for being a part of this dream come true,” Kaaria humbles to her audience before her stage exit.

The breather after the opening set was enough to re-up on our drink and grab something for the tummy. Once Mbithi and his band took the stage, we were once up on our feet. His set was impressing and his euphoric fans could not contain themselves.

Pop group, Sauti Sol’s keyboardist, Mutoriah and Tha Movement reaffirm something: his good voice and how good he sounds live. With a set like that, creating live music on the spot, it is hard to cancel on this guy. Even the rains can’t get the crowd to shelter when he is performing. Muthoni Drummer Queen (MDQ) walks by us as we are dancing in the rain on her own event cheering Tha Movement, which only adds to her down-to-earth, humble attitude.

Backed by a super band and wooing a younger audience especially filled with lots of female fans, Sauti Sol’s newest production outfit in town from their ‘Legacy Project’ – Sol Generation eccentric delivers. Nviiri The Storyteller, Bensoul, their cock mascot and Kaskazini erupt. These next frontier of show men leave a heartfelt impact. Phones wielded in the air, Chimano and Mudigi from Sauti Sol jump on stage and the party extravaganza unfolds. Offering Marijuana thoughts with a mild but charismatic delivery, Bensoul can really sing, play the drums and guitar too.

Before welcoming Fena on stage, MDQ vote of thanks is quite short and sweet. A woman in music and live events enters a culture that is dominated by men –but from MDQ, hailing Justin, Flora and Maleen, inspires young women to get involved in the music industry.

“Be your brother’s keeper and do not be silent when you see a lady being harassed,” she urges before Fena takes the stage.

Rocking a yellow African print jumpsuit, Fena slowly builds her performance with crowd’s sing-along tracks. She is quick to remind us of her of new album, ‘Unleashed,’ and why we cant sleep on it, 1o years later since she got into music.

Hyping the crowd with a flowing themed dancehall and reggae dubplates, veteran broadcaster G Money warms up. By this point the venue is ready for the star of the evening. From this moment on, the crowd is singing along to the songs and G Money picking the right moment, ushers in fellow South Londoner, Koffee’s official deejay and Grime rapper, Stormzy’s sister, Rachael Anson.

Koffee started right after 10pm. The teenage sensation delivered her debut Kenya performance. Dressed by Kenyan designer, Avido, in an African print patterned shorts and a matching jacket, her blonde-tipped dreadlocks pulled away from her face, Koffee confidently strode on stage singing ‘Burning’ to resounding applause from the capacity crowd.

To be honest, while we initially were looking forward to hearing her songs with a fleshed out live band, Koffee still killed it; I’m grateful I got to hear the impressive young singer perform in such a raw state, hype other acts Jamaican and UK dancehall songs and call out fans from the crowd to dance on stage with her.

Thanking herself and finishing of with “Toast,” the crowd went nuts, and Koffee looked overwhelmed and moved by all the support. She had to do ‘Toast’ again. The venue erupted!

Honestly, we left the show after Koffee’s set but my high school mate, Shabban Kerre tells us soulful music producer and disc jockey Sun-El Musician and Mixmaster Lenny rocked the after party!

Koffee, will make her Ghana debut this December 27, for the third annual Detty Rave.

The 2019 edition of Detty Rave has, appropriately, been branded Detty Rave: The Homecoming, with Mr Eazi extending invites to his favorite artists from across the Diaspora.

Detty Rave takes place at the future home of The emPawa Hub, a groundbreaking new facility for Africa’s creative industries, hosting recording studios, editing suites, office and recreational space, conference rooms and a bar and restaurant, in Accra’s Spintex Road area. It will also serve as the headquarters for emPawa Africa, the organization founded by Mr Eazi to empower the next generation of African artists with the tools, knowledge, network and investment to enable them to become independent music entrepreneurs.