Raging Fyah and the Journey Continues

Raging Fyah and the Journey Continues…

Poised to have a busy 2019, the band is ready to deliver extraordinary performances as they reveal the new singer ‘Journey’. 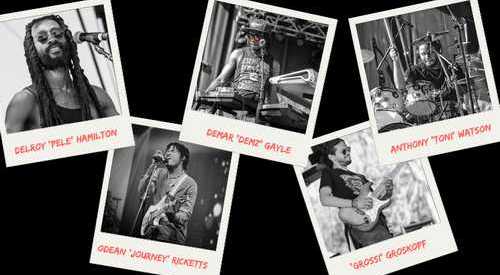 “You can’t stop the future, you can’t rewind the past. In order to grow, we must change. It’s a new year a new beginning.” – Raging Fyah

As 2018 is now behind us, GRAMMY-nominated group and Jamaica’s Reggae Music Ambassadors Raging Fyah is fired up for the new journey ahead. Poised to have a busy 2019, the band is ready to deliver extraordinary performances as they reveal the new singer ‘Journey’.

“I have been a fan of Raging Fyah ever since they came on the scene. As an artist and musician that loves reggae and roots music, Raging Fyah was what I gravitated to because it spoke to who I am. I always loved the band and the vibe, so to be the new lead singer, is hard to put in words. It is an honor, it’s a dream come through. Becoming a member of the band that I have always looked up to is very humbling, it’s also a big responsibility and I don’t take it lightly.” – Journey.

Speaking on welcoming a new member to the Raging Fyah family, Delroy “Pele” Hamilton stated “We are very upbeat and excited to be going into this next chapter with Journey as his energy, sound, and feel is ideal for the band. “Him jus’ sound like a real rebel” – with a raw fire, yet a warm voice. Plus, his versatility will give our fans soul moving performances and have them wanting more”. His authentic sound mixed with his youthful exuberance and charisma will appeal to people of all ages.

Fans anticipation is at an all-time high locally and internationally, to see Raging Fyah with its new member. The band’s first performance for 2019 will be at the “Bright Side Festival” Jan 6-10 at Jewel Paradise Cove Resort and Spa in Runaway Bay. The show will also feature Rebelution and The Green from the United States.” Raging Fyah will thereafter travel to New Zealand for the first time where they will perform at the One Love Festival on the 27th of January 2019.