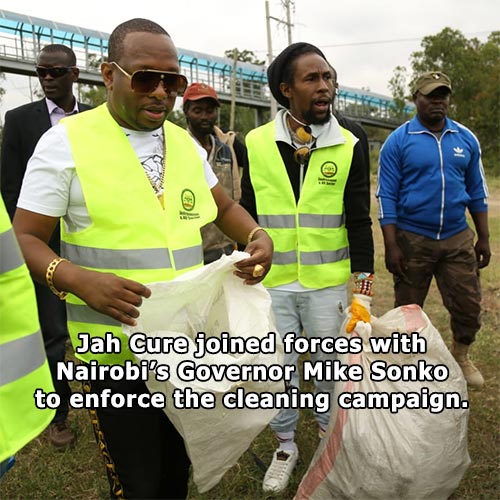 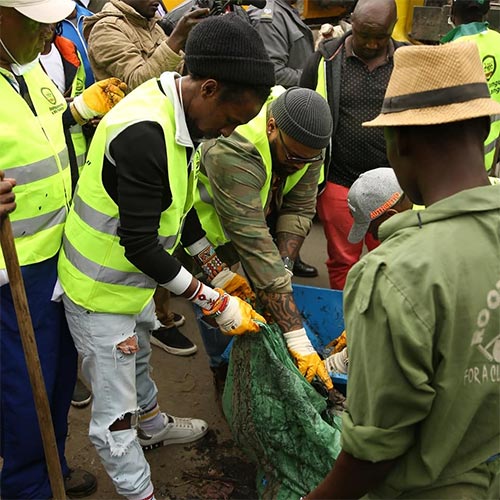 Grammy-nominated Reggae artist Jah Cure is calling all royal soldiers to keep the streets of the Motherland clean. The ‘Call On Me’ singer teamed up with Governor Mike Sonko for a cleaning campaign in Nairobi, Kenya on Saturday, July 6th.

Kicking off his African leg of his worldwide “The Royal Soldier Tour”, the first stop on the list was Kenya. The tour follows his new album “The Royal Solider” which will be available for pre-order July 26th and available on all streaming platforms August 30th. Jah Cure was on a mission to not only serenade the fans of Kenya with his voice but to voice his concern with keeping the streets of Kenya clean.

“I know I’m a hard working man but I did not come to Kenya only to sing but to work. Physically, spiritually, and mentally.” he told NTV.

Jah Cure joined forces with Nairobi’s Governor Mike Sonko to enforce the cleaning campaign. He voiced that he doesn’t see the need for anyone to drag us (Africans) to clean up and if Africans were beaten into slavery to build up other countries no one should have to whip us to clean up ours. The duo created a hashtag on social media called #MyWasteMyResponsibility.

Jah Cure’s philosophy stands: by keeping the motherland clean will keep a healthy future generation. His admiration for the work Governor Sonko has done for Kenya lead him to declare that we need more politicians that create evolutions for African young people like him.

Getting down and dirty, the Reggae singer cleaned up the highways and streets chanting “No plastic bags on the ground”.

Jah Cure took it to social media to share the work he’s done: “Governor of Nairobi @mike.sonko we have a mission to complete today to clean up Nairobi… 500 soldiers… 200 police and the entire Nairobi will be stepping through the streets of the hood on a cleaning up campaign…”

Although Jah Cure traveled to Africa for his “The Royal Soldier Tour,” he was on a spiritual journey as well. On Instagram, the ‘Call On Me’ singer visited Maasai Monduli Village in Tanzania where the Tanzanians gathered around him with powerful native chants. He posted: “Finding the path our ancestors walked is not always easy but the rewards of the journey makes the effort worthwhile”

After hard work and dedication for Kenya’s cleaning campaign, Jah Cure took the stage later that night to perform at the Umoja Splash Festival in Uhuru Gardens as the opening act.

The event broke the record of being the biggest sold-out Reggae event in Kenya in over 20 years. Making history, the ‘Call On Me’ singer thanked his fans on social media for the support: “History was made in Africa. Biggest sold out events in Kenya over 20 years in the industry of reggae music!! “I’m so proud to be a vessel… Thank you Jah. Thank you my fans. Thanks for the love of the people….”

Jah Cure premiered his music video for ‘Pretty Face’ yesterday as well which is already at 20K+ views in less than 24 hours.