It’s been a long time since Winston “Niney” Holness had a hit song. Fans will have to go back almost 50 years for his Blood And Fire, which made charts in Jamaica and the United Kingdom in 1971

NINEY IS PUTTING THE FINISHING TOUCHES ON A COMEBACK ALBUM

The man who produced numerous hit songs by Dennis Brown (Westbound Train, Cassandra), Sugar Minott (No Vacancy, Lovers Race) and Third World (Roots With Quality) is back in the hunt as an artiste. He is putting the finishing touches on a comeback album he hopes to release this summer. 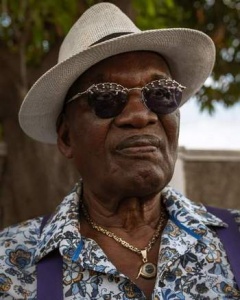 Niney has no title for the set as yet, but it contains edgy versions of Say What You’re Saying, originally done by Eric “Monty” Morris; and Silver Words, a song made popular in Jamaica by Ken Boothe. Niney produced Boothe’s version which was a hit in 1973.

During a break from recording sessions at Mixing Lab studio in Kingston, Niney spoke about his renewed desire to work as an artiste again.

“Mi stop produce artiste, mi nuh get nothing out of it. Dennis Brown was the only artiste mi sit down with an’ achieve something long-term,” he said.

The upcoming album hears him working with a number of veteran musicians including drummer Sly Dunbar, guitarist Dalton Browne, bass player Flabba Holt of Roots Radics fame and keyboardist Franklin “Bubbler” Waul. They go beyond the roots-reggae they and Niney are known for, incorporating boogie woogie and rock.

Niney took a second crack at music production in Jamaica 10 years ago when he launched Soundbox Studio in Kingston to unearth fresh singers. That did not materialise and he was encouraged to have another go at singing by none other than Lee “Scratch” Perry, one of his mentors.

“Mi see him and Maxie Romeo, an him sey, ‘stop produce artiste an’ do it yourself!’,” Niney recalled. “An’ mi jus’ stop.”

The eccentric Perry, considered by many to be reggae’s greatest producer, has had a remarkable career as an artiste for the past 25 years. Like Niney, he doubled as a singer in the 1960s before concentrating on producing classic songs by The Wailers, Junior Byles and Junior Murvin, among others.

Today, 83-year-old Perry tours the world, playing to thousands of adoring fans. Niney (so named after losing a thumb in an industrial accident) is not looking that far ahead but thinks he still has what it takes to make hit songs.