When singer Jahmark Tafari settled in Southern California during the early 1990s, reggae in that region was established among Americans who loved organic rebel music. It took 30 years for his sound to catch the ears of a different demographic.

The “Happiness Remix”, done with American rapper Targyt, did the trick and “Happiness” soared to number one.

“Happiness” is also the name of the fifth album by Jahmark Tafari and The Soulshakers which was released early last year.

“There is something for everyone (on the album) but it seems like Happiness is one of the more highly-favoured songs because it appeals to a variety of people and a wide range of age groups,” said Jahmark. “Up until this point, besides college radio and the local LA (Los Angeles) radio stations such as KPFK with Chuck Foster, and KXLU with Junior Francis, I have promoted the song mainly by means of the worldwide web by utilising such platforms as Spotify, Pandora, iTunes, Amazon, YouTube, SoundCloud, etc.” 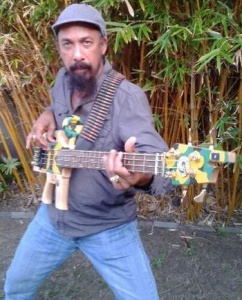 With the acceptance of “Happiness” by a college audience, he hopes it means a broader base for him and The Soulshakers. Their core support is anchored in Southern California which has produced a rush of young American reggae bands in recent years, including Rebelution, Tribal Seed and Stick Figure.

The success of these bands on the Billboard charts, Jahmark Tafari points out, has changed the reggae beat in California.

“Since the early 2000s there began a proliferation of local California bands that one by one started to appear on the scene. Over the years they began to perform as opening acts in the local clubs, and even managed to find themselves on some of the major reggae festivals such as the Bob Marley Day Festival in Southern California, as well as on Reggae On The River festival in Northern California,” Jahmark recalled. “Back then you would hear concert-goers muttering under their breath, ‘that’s not reggae music, what are these promoters doing to Jah music’? “Fast forward to today and we find that major, authentic reggae acts from Jamaica now opening for these once-opening acts who have dubbed their genre ‘Cali Roots’.”

Jahmark Tafari was born in Kingston, Jamaica’s capital. Recording since the early 1980s, his sound is inspired by the roots uprising that took place there during the 1970s.

He is excited about breaking new ground with “Happiness”.

“You wouldn’t believe how much times people come up to I ‘n I in SoCal after a show and say is the first time that they ever experience reggae music live, but that it won’t be their last,” Jahmark reasoned. “So, to top the college hip-hop charts in the U.S. means that we are reaching many youths here on a grass-roots level who wouldn’t normally be listening to the messages being delivered through the vehicle of roots-reggae music. It give them an alternative way of viewing things, you know, a different frequency.”