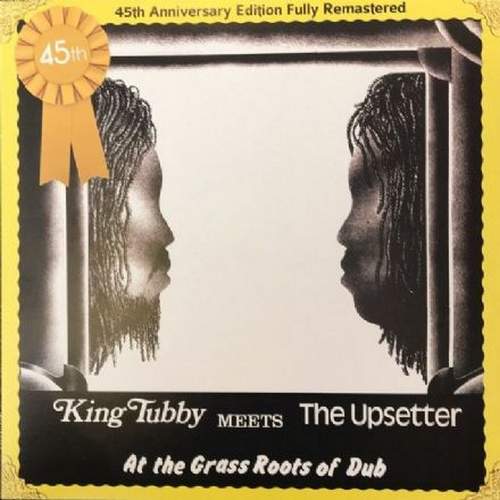 Listen to all tracks of the Album

As soon as the “King Tubby Meets The Upsetter At The Grass Roots Of Dub” LP hit the streets in 1974, it was hailed as a Dub LP with that extra-special something which most other albums of the ilk tended to lack. The Winston Edwards released legendary LP on his Fay Music label had style, had original ideas, and contained real rootsy rockin’ Reggae. The mixture of these top-quality ingredients made it well-worthwhile. With the music put together by Winston Edwards with assistance from Lee Perry — and primary mixing by The Upsetter — the hard riddims were dramatically realised in the form of dubwise mixes by the ubiquitous King Tubby. Using such superb musicians as Santa Davis, Family Man, Bobby Ellis, Tommy McCook, Vin Gordon, etc., the album was ideal for the Roots fans.

King Tubby’s techniques were portrayed in all their glorious spleandour, the Reggae music totally transformed and interpreted in Tubby’s unique fashion. He would curl, swirl, whirl, twirl, explode, corode, erode, ignite, excite — upset and agrovate — slipping vibrant echo to shatter the instruments, and jamming reverberation to re-duplicate the melodies. Echo-delay was inserted to add to the confusion. A Dub Master in session… creating such classics as “No Justice For The Poor”, “People From The Grass Roots”, “African Roots”, “Raw Roots”, “Luke Lane Rock”, “King Tubby & The Upsetter At Spanish Town”, and “Wood Roots”. Now this essential LP, which most likely was crucial for establishing a market for Dub albums in the UK, is fully remastered and reissued to celebrate the album’s 45th Anniversary.

(Note: The album has a unified sound, so it’s questionable if side 2 is really mixed by Lee Perry as is assumed)