A survivor of the Ska explosion that launched Jamaica’s music industry in the early 1960s, Eric “Monty” Morris never earned the international acclaim of his contemporaries who include Prince Buster and Derrick Morgan.

On February 25, the 77 year-old singer will be in the spotlight at the Little Theatre in Kingston, Jamaica, where he will receive a Lifetime Achievement award from the Jamaica Reggae Industry Association (JaRIA).

Morris, best known for Ska staples such as “Sammy Dead” and “Oil in my Lamp”, lives in Miami where he keeps a low profile. Recently, he and deejay Mr. Davis did a version of “Sammy Dead”.

Mr. Davis, a Jamaican who also lives in South Florida, initiated the collaboration after meeting Morris at a birthday party his (Mr. Davis) neighbor kept for the veteran artiste.

He will accompany the man he considers a legend to the JaRIA event. 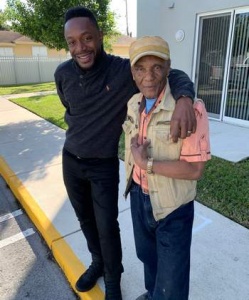 “I believe this icon paved the way and needs the recognition he deserves. I feel this is an accomplishment for the vision we both share, and I commend the Jamaica Reggae Industry Association for all the support for they are giving to all the icons and the culture,” said Mr. Davis.

The folksy, horn-driven “Sammy Dead” was released in 1964, nearly 20 years before Mr. Davis was born. He remembers his mother playing the song regularly in their home and it became one of his favourites.

Meeting Morris was a stroke of luck Mr. Davis was quick to capitalise on.

“This song is a part of Jamaican culture and for the generations to come, will still be here with us all,” he said.

Interestingly, the first producer Eric “Monty” Morris worked with was Prince Buster. However, his recordings with Buster did little, and it was not until he met Byron Lee in 1964 that his career soared with songs like “Wings Of A Dove” and “Sammy Dead”.

That year, Morris was on such a high that he along with Jimmy Cliff and Lee’s band, The Dragonaires, were part of Jamaica’s delegation to the World’s Fair in New York.

Like most of his Ska colleagues, Morris’ career floundered when the music evolved into Rocksteady, then Reggae. One of his Rocksteady songs, “Say What You’re Saying”, was covered by Dennis Brown in 1977 by which time Morris was living in the United States.

He resided in Washington DC and San Diego, California before settling in South Florida where he has called home for the past 19 years.