It’s been 3 years since “Irie Day”, Chezidek’s last album, was released. The roots artiste plans to break the drought this summer with a new set of songs.

The yet-titled album will bear the seal of his Chezi Berry Records and is distributed by Tad’s International Record, the independent company that handled Etana’s Grammy-nominated “Reggae Forever”.

“Because I’m Black”, the album’s lead single, was released in December.

“Is whole heap a things black people a guh through roun’ di world an’ I an’ I as a Rasta haffi sing ‘bout it. But wi a sing fi di family too; wi nuh bias against no one,” said Chezidek. 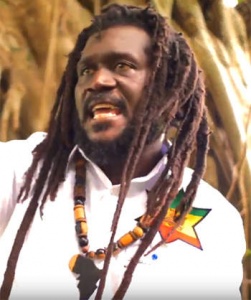 While his previous six albums had a blend of roots and lovers rock songs, this time around he goes straight protest. Instability throughout the world inspired him to write hard-hitting songs like “Hello Africa” and “March”.

Once the album is released, Chezidek plans to resume full-scale touring, especially in Europe which has been his happy hunting ground since first performing there in 2006. He took a break from touring for the past year as he concentrated on recording new songs.

To fans in Jamaica, Chezidek is best known for “Leave The Trees”, a ganja anthem that preceded the decriminalisation movement in that country by several years. That song is from “Inna di Road”, his 2007 album which was produced by Bobby Konders.

The radio appeal of “Leave The Trees” has never placed pressure on him to follow-up with another hit.

His career started in the mid-1990s as deejay Chilla Rinch who saw action mainly on local sound systems.

Twenty years ago, he had a change in moniker to Chezidek and began recording for Philip “Fatis” Burrell, whose Xterminator Records was one of the most successful labels in reggae. “Harvest Time” and “Rising Sun”, his albums for Burrell, paved the way for bigger things.

Chezidek plans to release another single prior to the release of his new album.