Born in Suriname but based in The Netherlands, singer Empress Miriam Simone always feels at home in Jamaica. It was a special occasion when she launched her second album in the home of reggae during Reggae Month.

That album, “Amsterdam Revival”, was introduced at Kingston 10 Sports Bar & Grill in Kingston on February 24. Some of the biggest names in roots-reggae passed through to support the Rastafarian artiste who recorded several of her songs in the Jamaica capital. 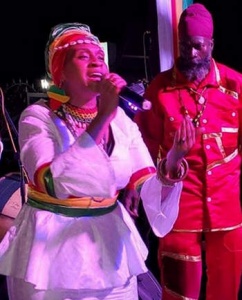 “The show went very well. It was a very spiritual vibe, a beautiful vibe,” said Empress Miriam Simone who performed songs from “Amsterdam Revival”. One of them, “We Don’t Want to Cry”, she did with Capleton.

She said the opportunity to work with Dixon again was the main reason for her going to Jamaica in October and November. He produced two songs from “Follow my Dreams”, her 2012 EP.

While in Kingston last year, she also performed at The Dub Club.

“Amsterdam Revival” was released digitally by Zojak World Wide on March 13. It also contains the collaborations, “Never Give Up” with Sizzla; and “Mother And Son” which is done with her son, Dammie Elijah.

Prior to launching her solo career in 2009, Empress Miriam Simone was background singer of Postmen, a reggae/hip hop group in the Netherlands. For a time, she was a member of Dutch group Dredda Youthz.

She has called Amsterdam home for several years. She hosts Sweet Meditation, a reggae show on the Radio RAZO station.