The squalour which music producer/singer Alphanso Henclewood was raised in Jamaica has inspired many a reggae song. Known in music circles as King Shark, his roots are planted in Greenwich Farm, a seafaring community that was a musical hotbed during the 1960s and 1970s.

Based in New Mexico, he is owner of Montego Records, an independent company that works with veteran acts like Prince Allah and emerging artists such as Autarchii.

The dreadlocked Shark recently told this website that while Montego Records and its predecessor, Green Farm, are not household names, they have stayed the course for nearly 40 years. 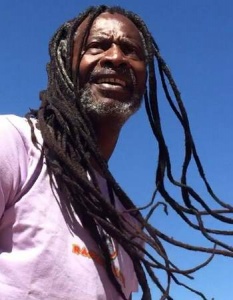 “I want people to know that I’ve been doing this since the early ’80s. There are so many people I have come in contact with in the music business that give me a lot of inspiration that I can still be doing it today. Still on the road of doing Rastafari work,” he said.

It was Fraser who encouraged him to follow the footsteps of Brown and another Greenwich Farm legend, Bunny Lee, into music production.

“Wi was talking about music an’ him sey, ‘Shark, yuh shoulda get a label fi yuhself an’ start produce some chune’. An’ that is how I start Green Farm,” he recalled.

Fraser, Prince Allah, Johnny Osbourne and Charlie Chaplin were some of the artistes who initially recorded for the label. After migrating to the United States in the 1990s, King Shark launched Montego Records which recently released songs like his “Love Revolution” and “Walk In The Light” and “Black Beauty” by the promising Autarchii. Smith, his childhood friend, played on most of the songs as well as drummer Leroy “Horsemouth” Wallace of Rockers fame. Many of the recording sessions took place at Tuff Gong studios in Kingston.

One of Shark’s objectives is to emulate the quality of Lee, Brown and Jack Ruby, yet another producer who made his name in Greenwich Farm.

For Alphanso Henclewood, his years in that working-class neighbourhood were bittersweet. “I am the only child for my mother but I have seven siblings. I grew up in a house on the gully side; no water, no light but life was sweet. Mi remember Earl Zero with him chalice, always singing. Wi use to cook ital food and praise Rastafari,” he reflected.

Greenwich Farm is not as musically viable as when John Holt, Delroy Wilson, Slim Smith, Johnny Clarke and Cornel Campbell roamed its streets. But King Shark is determined to show the potential of his hometown through a documentary he has in the works.

“That will be a great thing, ’cause a lotta good people an’ positive things come outa Greenwich Farm. Is people like me mus’ expose it,” he said.