Nadine Sutherland had big plans for 2020

Like many in the entertainment industry, Nadine Sutherland had big plans for 2020. It marks her 40th year as a recording artist and she had several celebratory events in the pipeline.

A scourge named Coronavirus put that on hold. For the 52 year-old singer, it’s been a matter of survival and going back to the drawing board. “After almost a year of planning, with new music releases and other things, I decided that I owed it to myself to continue with the plans I could control. I don’t know if the public momentum will start building again with regards to the attention my 40th year anniversary plans were garnering. I do know though, that I will continue; I owe it to the eleven year-old me, that through her spunk, gave me everything,” she said.

NADINE SUTHERLAND HAD BIG PLANS FOR 2020

Sutherland was a sprightly pre-teen when she went to Bob Marley’s new Tuff Gong studios in Kingston to record her first songs — “Starvation On The Land” and “A Young One Like Me”. Both were written by Sangie Davis, and Marley himself was in the studio when Sutherland cut them. 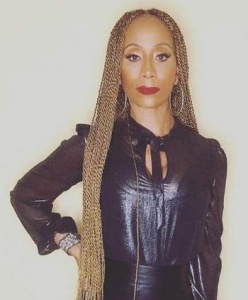 Recording for the Tuff Gong label was reward for winning the Tastee Talent Contest the previous year. Sutherland won ahead of singer Paul Blake (who became lead singer of The Bloodfire Posse) and a little known Albino deejay known as Yellowman. Her career has endured, thanks to dancehall anthems like “Action” and “Anything For You”, and the ballads, “Babyface” and “I’m In Love”.

“Chatty Chatty” and “Waggonist” are her latest songs. The former is produced by Danger Zone Music, while “Waggonist” is done to a vintage Rockers beat, produced by Neal “Mad Professor” Fraser.

Sutherland credits experience for helping to select what has often been the right projects.

“Ive always felt comfortable doing any genre of music in general. Reggae and dancehall music are a part of the fibre of my being. I’m only aware of any distinction when people make it so,” she reasoned. “I’m more comfortable in my own skin as an artist and a woman. I do understand the commercial aspect of the music, so I deliberately try to strike a balance between authenticity and commercial appeal. It would be foolish to put out a song, that might reflect artistic self absorption.”

Sutherland was born in Kingston but grew up in the hilly region of rural St. Andrew, overlooking the Jamaica capital. At the time of her Tastees victory, women were still struggling to make it in reggae.

Interestingly, the I Threes (Rita Marley, Marcia Griffiths and Judy Mowatt), Marley’s harmony trio, are some of her biggest influences.

Sutherland has high praise for contemporary artists such as Etana and Koffee, who became the first woman to win the Best Reggae Album Grammy this year. As for her own career, but for a few glitches, it has been fruitful.

“From my perspective, we need to be paid like our male counterparts for shows and appearances. I would take the rumor mongering less personal, (but) it is a part of the fame machinery. Anyway, it helped to make me stronger,” she said.