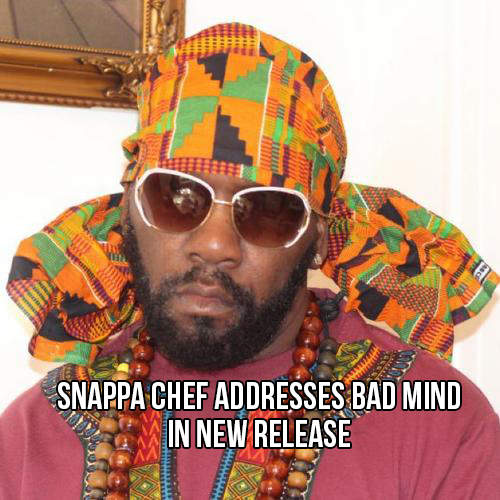 Reggae artiste Snappa Chef is coming through with a strong message in his latest single “Stage 4 Badmind”, produced by Shandemdee Releases and Saucy Fyah Ent.

“The world is on a reset so we must get rid of everything that is holding us back; that is Stage 4 Badmind. Some of us badmind against our own self and that’s why I was inspired to do this track, to eradicate envy and downfall of others,” the artiste explained about the track’s meaning.

The music video for the track was shot in areas around St. Ann, Highgate, Port Maria and White Hall.

“My video was chosen to be number one for two weeks on the Buss the Artist Dem Radio Show with DJ Vegas and that’s a big deal. I also have to shout out the Bass Plannet Sound Group for their continued support,” the artiste highlighted. In addition, the feedback for the track has been overwhelming and the support is evidence of the quality of this work, with airplay on local stations such as Irie FM and Bess FM, as well as overseas in countries such as Europe, UK- where it is the number one playing track on Shark3y Caster FM, Africa and the USA.

Known for tracks such as “Child Is My Child” and “Raggidi Clothes”, Snappa Chef is a world class musician who uses his upbringing and surroundings to bring forth positive messages to the ears of listeners. Growing up in the Dela Vega City area of Spanish Town, Snappa Chef’s first career path after high school was the culinary arts and he started out, quite fittingly, as a chef. Further down the line, he recorded his first single, “Mind Power” for the Music Max label and he hasn’t looked back since.

“Music was an outlet in the ghetto; you either do music or badness. Music chose me,” he expressed. Outside of his music endeavors, the artiste is also using his platform for philanthropy; along with his management team at Saucy Fyah Ent, who has created Missions on Fyah 4 Jamaica, and Food Full Up, benevolent organizations that have been providing annual financial assistance to schools, children and adults in St. Mary.