For almost 40 years, Sister Carol has been an uncompromising warrior for Rasta and roots-reggae. Songs like “Dread Natty Congo” and “Wild Thing” have made her one of the genre’s bona fide stars.

Recently, Jason Mraz, one of pop music’s brightest stars, reached out to her to work on “Look For The Good”, his latest album. He and Sister Carol collaborated on the song “Time Out”, a laid-back ode to the good weed.

Produced by Michael Goldwasser of Easy Star Records, “Look For The Good” entered Billboard Magazine’s Current Reggae Albums Chart at number three. Buju Banton’s “Upside Down” debuted at number one and Vybz Kartel’s “Of Divas and Dons” came in at number two.

Sister Carol was introduced to Mraz by Goldwasser who she has known for over 20 years. 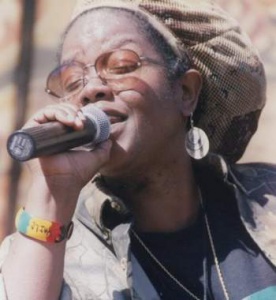 “I knew his music but never him. I was familiar with the big hit “I’m Yours” but didn’t know much about him,” she said of Mraz. “Recording with him can introduce me to his fan base while I’m introducing him to mine. His album is also reggae, so there you go.”

Mraz is originally from Virginia. While he grew up listening mainly to rock music, he consumed a lot of reggae including Bob Marley’s ubiquitous “Legend” album, which was his introduction to Jamaican culture.

“I’m Yours”, his big hit from 2008, is reggae-flavoured. His previous albums, which includes the massive “We Sing. We Dance. We Steal Things.”, have sold millions of copies.

Sister Carol is also known for hard-hitting albums like “Black Cinderella”, “Lyrically Potent” and “THC (The Healing Cure)”. The latter salutes the prowess of ganja, considered a religious sacrament for many Rastafarians.

Though born in Kingston, Jamaica’s capital, she was raised in New York City during the 1970s. There, she was weaned on the message of Rastafari and music of various roots artistes.

Relentless touring in Europe and the United States have made Sister Carol a mainstay of the live reggae circuit for over 25 years. She was about to embark on a short tour of the US West Coast four months ago when the coronavirus struck.

At 61, music and faith, are what helps keep Sister Carol in the trenches for Jah army.

“I’m motivated by life itself. My value system different from most people The most important thing for me is the next breath,” she said.