Despite widespread racism and the chilly weather, it was an exciting time to be a West Indian immigrant in the United Kingdom during the 1960s. Part of that excitement stemmed from Jamaican artistes who moved to that country and endeared themselves to white youth with ska and rocksteady music.

Anthony “Chips” Richards was among the thousands of Jamaicans who settled in the UK at the time. By the early 1970s, he was a marketing man with Trojan Records, helping to pitch the songs of Dave Barker and Ansell Collins, Nicky Thomas and Ken Boothe to the mainstream.

Now in his early 70s, Richards is an elder statesman of the UK reggae industry. His tireless work has been noted by the Jamaican government which awarded him a Badge of Honour in its annual National Honours and Awards list. 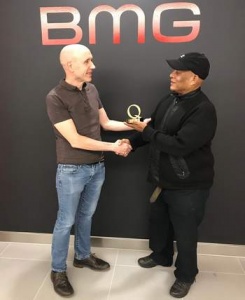 In the last three years, Richards has worked with the Jamaican government to gain recognition for pioneer artistes in the UK, some of whom have fallen on hard times.

“I’ve actually spent the last 50 years trying to improve the original artistes’ welfare, helping them keep active in music events. They see me as the tunnel through which things happen,” he said.

Though often criticised for under-minding its artistes, Richards says Trojan was “massively important to reggae”, giving Jamaican artistes the exposure they would not have received in the larger market of the United States.

Dave Barker and Ansel Collins’ “Double Barrel”, Nicky Thomas’ “Love of The Common People” and Boothe’s “Everything I Own”, are some of the big sellers Trojan produced in the 1970s. Richards worked on all.

He also broke new ground for reggae in Japan and Nigeria by taking and exposing the music of The Cimmarons and The Pioneers, as well as The Mighty Diamonds, U Roy and Sonia Spence in what was still largely virgin territory.

That experience is what Richards has called on to keep the legacies of acts like Owen Grey and The Cimmarons alive. He does so with unbridled passion.

“I don’t think people know how much these artistes mean to me. We’ve been here (in the UK) so long we’re like family, and families look out for each other,” he said.

The National Honours and Awards ceremony takes place in Kingston on October 19, 2020.