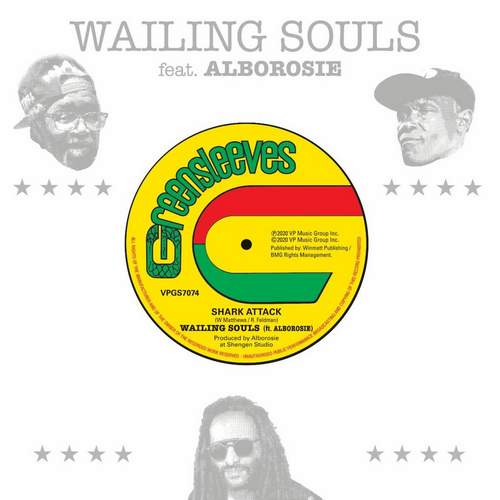 The new single from Wailing Souls, “Shark Attack,” features Alborosie and delivers their message loud and clear. Taken from the forthcoming Wailing Souls’ “Back A Yard” album, produced by Alborosie, “Shark Attack” updates the Souls’ 1992 hit reggae recording, originally a commentary on capitalist exploitation and the ‘new world order’ phrase buzzing at the time. For the new recording, Alborosie crafted additional lyrics of street level exploitation in Jamaica, The single is available on streaming platforms and 7″ vinyl single.

Wailing Souls are standard bearers and among the few active surviving elder statesmen from the birth and the golden era of reggae music. With a career spanning more than five decades, from rock steady through reggae to dancehall and beyond, their canon is part of the soundtrack of Jamaica itself. Songs including “Fire House Rock,” “Jah Jah Give Us Life,” “Mr. Fire Coal Man,” and “Shark Attack” mark creative high points in reggae history.

“It’s no secret that the Wailing Souls helped shape the sound of reggae from day one,” says Alborosie, “I first got hooked on Firehouse Rock. With the album Back-A-Yard, it was my pleasure to bring back a vibe that they controlled in the late ’80s and early ’90s and to remake “Shark Attack”, one of my favorite songs, which deals with issues we still face today in Jamaica and worldwide.”