In 1996 when Glen Washington went to the Brooklyn, New York studio of Studio One, he was a journeyman singer with no big hit to his name. Clement “Coxson” Dodd, the label’s legendary patriarch, pitched him an idea.

The other ‘Jackson’ was Beres Hammond whose vocals Washington’s bear a startling similarity. He agreed to do an album for Dodd with songs on hallowed Studio One ‘riddims’ for an album called “Brother To Brother”.

The set was a hit, thanks to songs like the title track and “A Change Is Gonna Come”. Washington, a former drummer who switched to vocals while working the hotel circuit in Jamaica, became a star 23 years after he cut his first song. 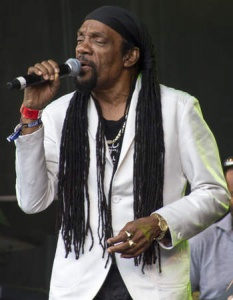 These days, he is still on the prowl for that big hit. “I’m Livin Well”, his latest album, was released in June by producer Willie Lindo’s Heavy Beat Records out of South Florida.

Washington, who lives in Tampa, Florida, also voices for different producers like Trinidadian Cliff Manswell. His song, “Can’t Stop”, is on “The Message”, a seven-song EP scheduled for release in early October.

“Brother To Brother” gave Washington the break; working with producer Lloyd Campbell solidified his emergence as a bona fide star. “Kindness For Weakness” and “Rise And Shine”, his hit songs for Campbell, were also done on classic beats.

“The Message” is a ‘riddim’ project by Manswell’s company, CKM Infinity Studio. It also features songs by Anthony B, Lutan Fyah and Prezident Brown.

For Washington, selecting the right ‘riddim’ to record is critical in reggae.

“Mi listen to a lotta riddims ’cause producers send mi dem to voice on. But it haffi have certain things like good arrangements and modulation before I do it. I turn down some ’cause mi not feeling it,” he said.

Washington has been feeling music since his childhood in church when he sang on the choir. He is from Clarendon, a rural parish in central Jamaica that has produced venerable acts like Derrick Morgan, Toots Hibbert, Freddie McGregor and Barrington Levy.

He got his start playing drums and singing in bands like The Titans and Happiness Unlimited. The latter impressed Stevie Wonder enough for the Rhythm And Blues star to take them to Los Angeles in the early 1980s for recording sessions.

Washington had settled into the groove as a regional artiste in the United States at the time of his meeting with Dodd. He had previously lived in LA and Detroit, where he worked the reggae scene.

As for the comparisons with Beres Hammond, he is flattered and amused.

“When mi see him (Hammond) wi have a good laugh ’bout it. I don’t mind it all ’cause Beres is a great singer.”