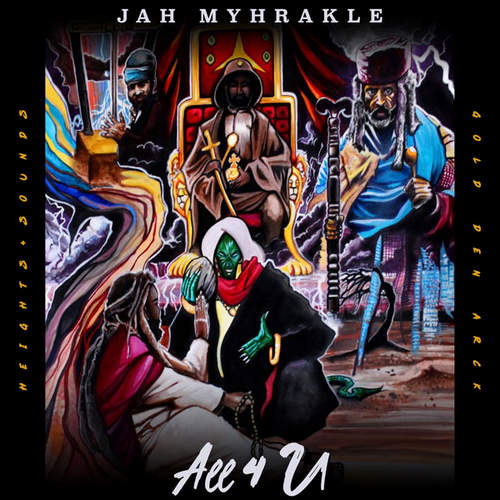 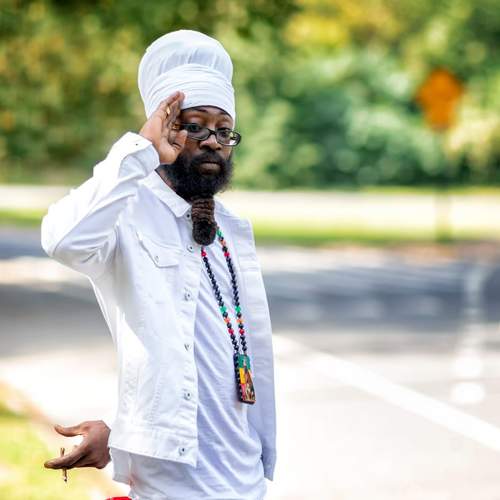 NEW ALBUM
JAH MYHRAKLE – ALL 4 U

Fueled by an original roots reggae sound, Jah Myhrakle’s third full-length album “All 4 U” brings his trademark powerful voice and a spiritual message of Rastafari, while producer Tyler Reid of Heights & Sounds brings live instrumentation and dub soundscapes to this coast to coast collaboration, from rural Washington State to Brooklyn, New York. Vocals were recorded in Brooklyn at Gold Den Arkc Recordsz, with additional mixing from DFlow Productions. The final two tracks are live dub mixes from the influential St. Croix producer and engineer Laurent “Tippy” Alfred of I Grade Dub, who also mastered the album.

The album begins with “Up 2 U”, a straight-on impact of orbiting synths, and lyrics that lay the foundation for this premise. “For propulsion through time and space, one requires experiences…” Songs like “Clarity”, “Correlate”, and “Earth Will Bow Down” continue down a path of meditation, inspiration and intensity. One-drop drum riddims and smooth bass lines are fused with jazz-inspired guitar leads, acoustic textures, and interwoven dub elements. Words from “Correlate” could not be more timely: “Things can get better if we correlate; difference fi differ tell dem no debate; life will be bitter if we lose the faith; world-wide disaster if we don’t relate”.

“She Is Royal” and the album’s title track, “All 4 U” express reverence and gratitude for the earth mother, with prominent acoustic elements, upbeat riddims and layered harmonies. On “Glad 2 B With U”, driving militant drum and bass is met with lyrics of contrast. “Sadness can be washed away with a beautiful little smile, eminence and twilight is the new day sunshine rise”. “All In His Hands” and “Keep It Safe” bring the vibe full circle, while I Grade Dub versions of “Up 2 U” and “Earth Will Bow Down” propel the listener into a new dimension.

As the artist continues to reflect, “The album is one that expresses a deep sense of care, hope, compassion… and also highlights a subliminal warning to take heed unto the words and laws…there is uprightness in the ways of Igziabeher.”

With a steady stream of releases in recent years including “Lead The Way”, a recent chart topping single featuring the late Vaughn Benjamin of Akae Beka, Jah Myhrakle is steadfast on a mission to bring the powerful message to the masses. “Within the heights of silence there is a sound; within that sound there are pulses. Pulses that breathe; a riddim of life. One should inherit it through some means and exhibit it through all streams. Music is life.”