Never one for the limelight, Prezident Brown chuckles when asked if he ever yearns for that big hit single. At age 55, the veteran singjay prefers to maintain his standard and produce quality songs.

He thinks he achieves that with “Pretty Looks Outside” and “Son Of A Gun”, his new singles which are produced by Irie Sounds and CKM Infinity Studio, respectively.

Based in Northern California, the Jamaican artiste keeps busy by recording at his home studio. That region and the Pacific Northwest, have been his strongest markets for nearly 20 years.

Prezident Brown first toured California in 2001, playing club dates at the invitation of a promoter he had met in Jamaica. He “made a good impression” on that initial run and has been touring there ever since. 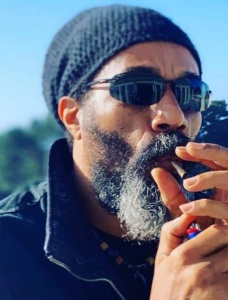 Even with the Coronavirus scare, he headlined the Northwest Reggae Fest in Oregon on September 8.

Though he has never had that massive radio hit, Prezident Brown is one of reggae’s consistent touring acts. He has developed a following in the United States, Europe, Israel and Mexico thanks to strong albums like “Big Bad And Talented”, “Prezident Selection” and “Generation Next”.

On most of his albums, he worked with engineer/producer Barry O’Hare who died at age 55 on September 19 in Jamaica from Coronavirus complications.

“Barry was a very cool bredrin; kind, not selfish. I met him in the early ’90s when mi was a country artiste an’ wi build a strong relationship. Wi use to go studio an’ jus’ lick song… suh wi used to work,” he recalled.

O’Hare, who was also known for his work with Burning Spear and the RUNNetherlands label, produced several Prezident Brown songs including “Micro Chip”.

Prezident Brown did two albums (“Big Bad And Talented” and “Prezident Selection”) for the Dutch company which gave him a foothold in Europe where he first toured in 1995. His last appearances on the continent were in 2014 when he performed at Reggae Geel in Belgium.

“Son Of A Gun”, released as single on August 21, is also scheduled for release on October 9 as part of “The Message”, a seven-song EP produced by Cliff Manswell, a Trinidadian who has toured Northern California and the Pacific Northwest with Prezident Brown as a bass player for a number of years.

Born Fitz Cotterell, Prezident Brown is originally from Clarendon parish in central Jamaica. He was raised in St. Mary, a hilly parish in the country’s eastern region that has produced artistes such as Josey Wales, Ninja Man, Admiral Tibet and Capleton.

In 2021, Prezident Brown intends to do step outside of his roots-reggae persona and record a hip hop album.