Since returning to Jamaica from the United Kingdom in 1983, Dandy Livingstone put music on the backburner and settled into life as a successful businessman. Weekends saw him putting in a round of golf or a game of cricket.

But last year, the man known for songs like “Rudy, A Message To You” and “Suzanne Beware Of The Devil”, revived his vocal career with “They Call Us Legends”, a ska song that pays homage to his contemporaries from the 1960s.

That is also the title of his album which was released in July by his Par Three Music label.

According to Livingstone, a comeback after 37 years away from the recording studio, was inevitable. 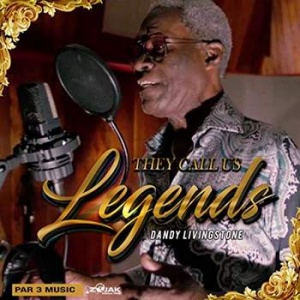 “Music is in my blood, been there for ages. Over the years I noticed there wasn’t anything new as such happening where reggae music is concerned…. and I used to get messages from fans, enquiring about my status. So, I said, ‘why not give it another go’. After all, there are a lot of unfinished songs in my head,” he said.

Livingstone, a well-preserved 76 year-old, collaborated with Paul ‘Computer Paul’ Henton on album and song. Guitarist Mitchum ‘Khan’ Chin of Buju Banton’s band, trumpeter David Madden and keyboardist Ansell Collins are some of the musicians who worked on “They Call Us Legends”.

Also featured is U Roy, whose career took off a few years after Livingstone first came to prominence in the UK in 1967 with “Rudie, A Message To You”. The pioneer toaster appears on two songs — “Rootsman Party” and “Standing Up For The Rhythm”.

A limited edition of “They Call ?Us Legends” has been released on vinyl in the UK, where there is a thriving market for that medium.

Livingstone (real name Robert Thompson) was born in Kingston, Jamaica. He was part of the massive influx of West Indians to the UK during the 1950s and 1960s.

He was 16 years-old when he went there in 1959. It did not take him long to get immersed in the British music scene which was a melting pot of rock and roll, soul and ska.

The lanky Livingstone began recording in 1964 and had a breakthrough hit three years later with “Rudy, A Message To You” which has been covered by The Specials and Amy Winehouse.

Released in 1972, “Suzanne Beware Of The Devil” is his biggest commercial success, as it entered the British national chart. Though his songs retain an underground following in the UK and Europe, Livingstone admits he is not in tune with today’s music.

“I am not into the watered-down, or should I say commercial style of the music. But I believe in diversity, so it boils down to each his own,” he said.