Dean Fraser is not afraid to tell anyone that he is no fan of Christmas. However, being a musician, he is a great admirer of the classic songs that help make the season joyous.

Reggae’s premier saxophonist puts a Rastafarian feel to some of those standards on Nyabinghi Christmas, his first Yuletide album, which was released on November 20 by Tad’s International Records.

Fraser’s 45-year career has encompassed all facets of Jamaican music — from roots-reggae to lovers rock and dancehall. He has done tribute albums to Bob Marley and Dennis Brown, but never a full Christmas project. 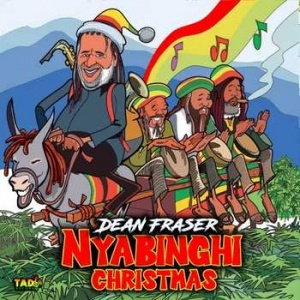 “I wouldn’t say Christmas is my favourite time of di year. Only thing I love about Christmas is di songs… they are well-written and worth listening,” he said.

Bassist Mikey Fletcher, his colleague from the 809 Band, and hot guitarist Lamont Savory, also played on Nyabinghi Christmas. The sessions were some of the last for Feluke, a talented percussionist who died in September from colon cancer.

Work on the album started last year. Production continued despite the challenges of COVID-19 and while Fraser was on a break from duties as musical director with Tarrus Riley.

Fraser is pleased with breaking new ground with Nyabinghi Christmas which he says is an Afro-Jamaican take on a European celebration. In his opinion, similar music should be done for other rituals and events.

“Whether it be christenings, weddings, anniversaries it should be Jamaican. We should record our music for all these things,” he said.