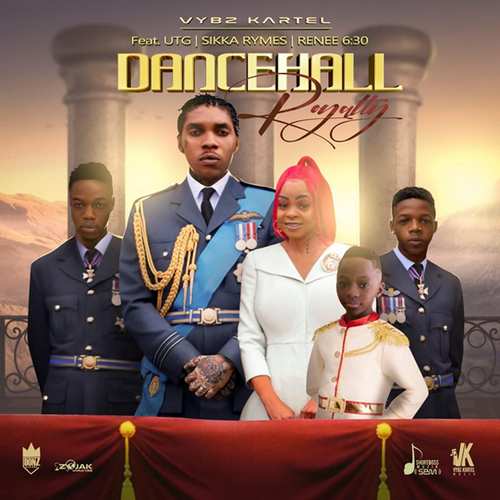 “Dancehall Royalty describes my family to a T, just like the Marley’s are Reggae Royalty. It’s a fitting moniker because remember now, all my immediate family members are also musicians/ artistes. I am the King of Dancehall, my sons are upcoming mega stars and my baby mother is a gold selling producer so it is a fitting title,” Kartel expressed.

With only 5 tracks present, this EP is the first in a series of albums to be released. The second installment, Dancehall Royalty Part 2 will be released in late April. That project will feature 10 tracks, along with the usual and a few surprise appearances.

“The difference with this series of albums is that it’s not so much about me. I’m showcasing my sons to the ‘Big League’ if you will ( ‘sons’ including Sikka Rymes as well). Renee 6:30 and Savage are also a part of the cast, though there will be a few other star features in the future,” Kartel highlighted.

Dancehall Royalty follows the highly successful Of Dons And Divas which was released in June 2020. The artiste has been steadily keeping the hits flowing with regular album releases, as this one comes a year after the release of the January 2020 album, To Tanesha. As expected from an artiste at the top of the game, the EP has been well received so far, already topping the iTunes Reggae charts, holding steadily at number 1 just hours after its release.

“I have great expectations for this album. I know it will be received well with the hardcore Gaza nation and that’s the aim,” Kartel said. With the full involvement of his family in this series, this and the subsequent albums are already standout projects for the artiste.

“All the tracks on this one make it hard to decide on a favourite. It has all my kids on it with me so you know the significance of each track,” he added.